Illusions: Science teacher has a couple tricks up his sleeve 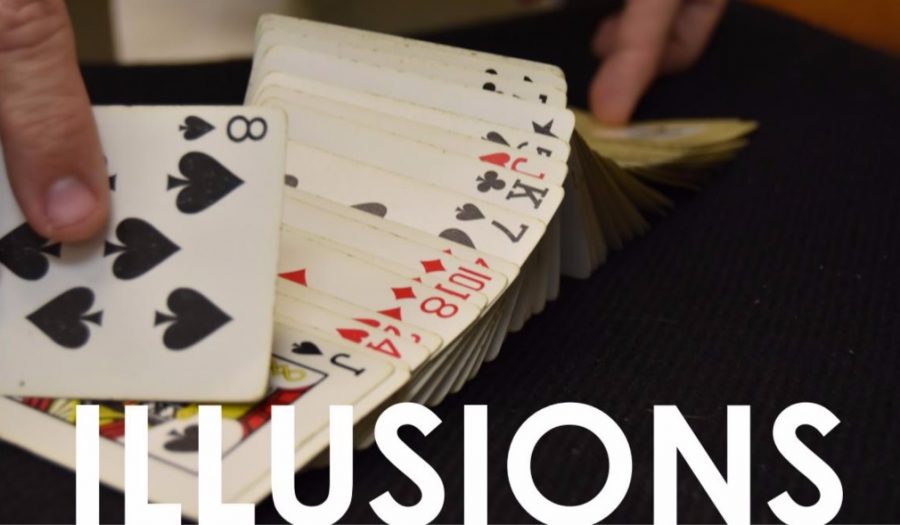 Physics and Astronomy teacher Jeff Brocketti enjoys performing magic tricks for his students at the beginning and end of each school year. Brocketti learned various sleight of hand skills and card tricks when he was in high school and college. (Photo by Shanzeh Umerani)

Physics and Astronomy teacher Jeff Brocketti has a strong passion for science, but few would guess that he also has a talent for illusions and card tricks.
As a high schooler, Brocketti saw magic tricks on TV and decided that he wanted to learn how to do them himself. He practiced on his own: reading books, watching videos and talking with another local illusions enthusiast.
“My favorite part is seeing something and being amazed by it and then taking the time to learn how to do it and being able to pass that amazement along to other people and see the look on their faces,” Brocketti said.

It was challenging for Brocketti, as a high schooler and later as a college student, to pay for the materials he needed to become a self-taught magician.
“The biggest obstacle was just the fact that those things are expensive,” Brocketti said. “When you’re a high school kid and then eventually early on in college, spending…80 to 100 bucks on a video is a lot.”
From the beginning, Brocketti knew that he would always keep magic tricks as a hobby rather than exploring it any further.
“I’m not a performer. That comes with a certain type of mentality as well and even when I was fairly good at this stuff, and I could actually perform the illusion well, I still never was the type who could sell it like a performer,” Brocketti said. “Plus, it was something that I did for fun, and I had fun doing it—as soon as you start taking it more seriously, then it becomes, in my opinion, a little less fun and a little bit more of a job.”
Two times per year, Brocketti performs tricks for his students—once at the beginning, and once at the end. His go-to trick for performance is called Three-card Monte, a trick that got its name from street performers.
“It’s easy to perform and it just kind of catches people off guard,” Brocketti said.
For many years, Brocketti has toyed with the idea of sponsoring an illusions club at McLean.
“If anyone is interested in actually forming a club where we just sit around once every couple weeks or once a month [to] do [magic tricks], I’m happy to be the faculty sponsor for that,” Brocketti said.
Over time, it has become harder for Brocketti to put the time he wants to into his card tricks. In the future, however, he hopes to be able to spend more time practicing.
“Life kind of gets in the way a little bit, but I keep up with the [skills] I have and, at the beginning of the year and the end of the year, I look forward to [performing for students],” Brocketti said. “It would be nice if I could do it a little more…but maybe in time.”