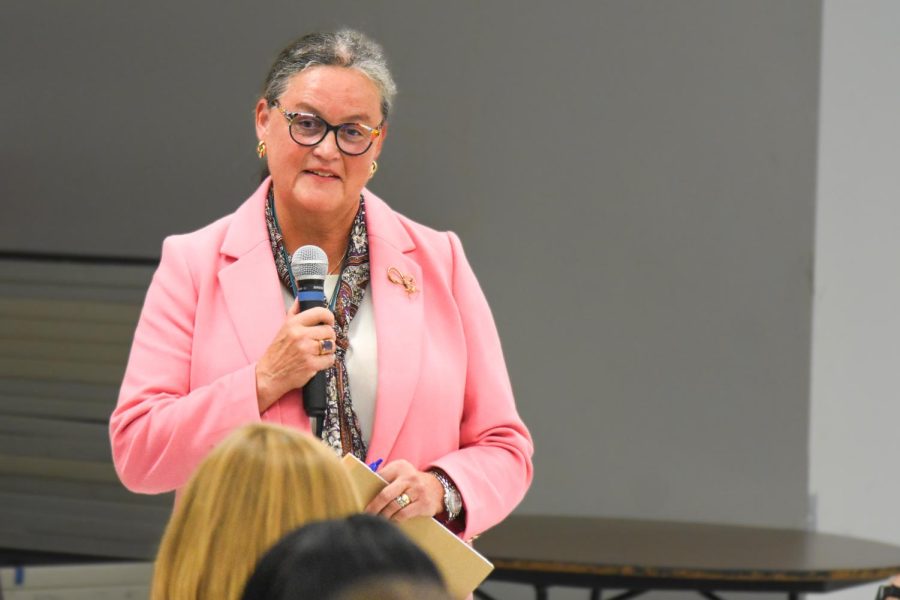 On Thursday, September 8th, Fairfax County Public Schools (FCPS) Superintendent Dr. Michelle Reid visited McLean High School as a part of her three-month Community Conversations Program. Parents from the McLean school pyramid attended the event, which provided them with the unique opportunity to meet and discuss topics of concern with the superintendent.

Reid’s visit to McLean marked the first of multiple scheduled visits across the Dranesville District of Fairfax County. As Reid enters her tenth week in office, these events allow her to meet with parents and other community members across the county.

Joining Reid during the event were Dranesville District school board member Elaine Tholen, McLean High School principal Ellen Reilly, Longfellow Middle School principal Jim Patrick, and Assistant Superintendent Fabio Zuluaga. Throughout the event, Reid engaged with the audience, notepad in hand as she recorded notes regarding pressing issues.
Overcrowding
Many participants spoke about obstacles regarding McLean’s growing population and the resulting pressures on its schools.

“McLean is such a vibrant, downtown city,” said Connie, a community member at the meeting. “It’s not just growing, it’s exploding.”

This rapid growth has impacted students who must attend increasingly crowded schools and classes in temporary trailers and modular buildings.

“[In] the two blocks that we’ve lived in for eight years, we’ve gone from houses that had no children to 25 additional children being added to those two blocks, and I think that’s happening all over,” said Felicia, a parent attending the meeting.

Models that are currently in place to predict and plan for increases in student attendance have been shown to be inaccurate.

“We are looking at the student-yield formula, which is the idea of if you put up a structure, how many kids do you expect to come out of it,” Tholen said. “Right now, we’ve been using the same formula for a high rise building to a new house. Across the entire county… we have the same formula, it’s not working.”

While possible solutions to overcrowding have been frequently discussed in the past, many community members are not satisfied with current plans.

“My understanding is that we’re not on the Capital Improvement Plan for 10 years out, even to be expanded,” said Felicia.

Parents shared concerns over how the increase in students has affected their learning environment.

“The whole sixth grade is in trailers,” Felicia said. “The first week, [the] air conditioning blew out. Too bad for them, it’s 90 degrees [so students went] in and out of the library. That’s a really hard way to start your learning.”

A large percentage of the meeting revolved around these overcrowding issues, which participants hoped would draw Reid’s attention as she looks to the future.

“We can’t just [set] boundaries for today, or we’re going to be lost 10 years from now,” Reid said.

While there are significant obstacles to reducing overcrowding, multiple groups are working to provide both short- and long-term solutions.

“Really good news is in our most recent budget,… we have three additional positions in our planning office for FCPS,” Tholen said. “[The staff] can do more things like really look at the development in this area.… It’s great that the McLean Citizens Association is working on it, but our planning people need to be working on it full time as well.”
Special Education & Neurodiversity
Several parents of neurodivergent students expressed concerns regarding the support provided to special education and twice-exceptional students.

FCPS defines twice-exceptional students as those “who have the ability to think, reason, and problem-solve at very high levels, and they also have special education needs.”

For these students, the Advanced Academics staff at their school works with the Special Education staff to provide students with the tools needed to succeed in their classes. However, some parents expressed concerns about the amount of individualized support provided past elementary school.

““In middle and high school, there was this movement towards… a one-size-fits-all approach in terms of helping with certain skill sets with… advanced learners [who] also need support in certain places like executive functioning,” said Melissa, a parent of a twice-exceptional learner.

“Twice exceptional students… not having access to advanced courses… is on my radar, and it’s an area we really need to talk about,” Reid said.

Other parents were thankful for the support their child received at school, but still stressed a lack of emphasis on special education programs.

“My daughter is a fourth grader, and she’s special ed. I have to give a shout out to the special ed staff there… but I feel like there’s not a focus on special ed,” said Olev, a community member who attended the meeting. “Kids like my daughter could easily…get lost, especially with the [COVID-19] shutdown.”

For some students with learning disabilities, a lack of sustained connection to special education staff during the virtual school year led to lessened assistance.

“We don’t want any child getting lost in the system,” Reid said. “I’ve also met with the special ed PTA, and…very strong advocacy groups for making sure that we continue to work on improving and supporting our students with special needs.”

Reid added that FCPS has recently conducted an independent audit on its special education programs. Its results will be presented to the school board on October 4, along with subsequent recommendations.
Transportation Challenges
Parents expressed concern regarding delayed school buses and the resulting effects on student performance.

“If [students] come to school late continuously, the achievement gap is going to just become bigger,” said Katherine, a parent who attended the meeting. “I think that’s an immediate problem that the county needs to address. I do understand the [bus driver] shortage, but we still need to make sure the students are getting to campus on time.”

While multiple parents discussed late buses, analysis of arrival times on the first day of school revealed the vast majority of FCPS buses were on schedule.

Some parents reported extreme differences in the number of students riding buses on different routes and explained that students often have routes that result in them driving long distances away from school, making busing an inefficient form of transportation.

“Our bus is also very overcrowded,” said Steph, a McLean parent. “I have a ninth grader and a twelfth grader, and they are seated three to a seat for more than half of the bus [ride]. I called transportation, and they said that there is not much they can do.”

As the meeting came to a close, the audience learned of obstacles that present a consistent challenge to ensuring Dranesville District buses are on time.

“Unfortunately, the three percent of bus routes that are not on time are in Dranesville,” said Elaine Tholen, Fairfax County School Board Dranesville District Representative. “I actually had a two-hour meeting earlier today with a … transportation expert. He was saying our bus routes are not the first bus routes that bus drivers choose because we live in a hilly area, it’s dark, we have a lot of trees that can hit the bus, and roads are narrow.”