Student Rights and Responsibilities updated to prevent phone use during classes 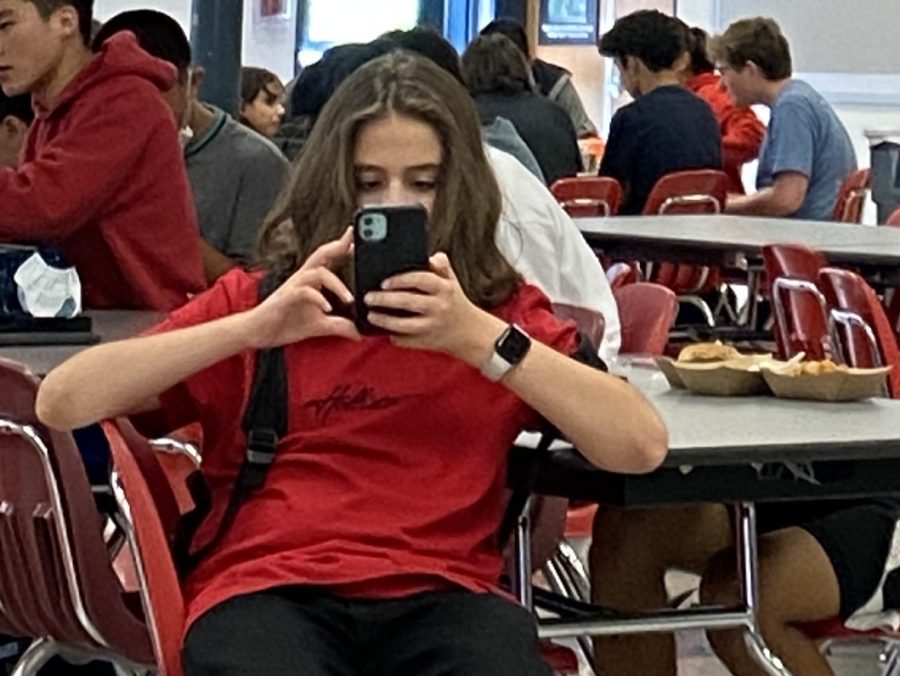 High school students are permitted to use phones during passing periods in the halls and during lunch. "I think if we set the tone correctly at the beginning of the year, and we make [the phone policy] part of our culture, then I don't think it will be a problem," Principal Ellen Reilly said.

As students began the new school year, they encountered new expectations regarding the use of cell phones during the school day. On June 16, the Fairfax County School Board (FCSB) voted to alter the Student Rights and Responsibilities (SR&R) to restrict the use of phones and phone accessories for the 2022-23 school year.

The policy has different requirements for students in high, middle, and elementary schools. High school students are permitted to use phones before and after school as well as during passing periods and lunches.

According to the new cell phone guidelines, “Phones [and their accessories] must be silenced and put away during all instructional periods.” Similarly, phone features on smart watches must be turned off when phone use is prohibited. In addition, the policy explains, “Storage may be in a locker, backpack, pencil bag, etc., during classes” and “[s]tudents are prohibited from using phones, tablets, and other mobile devices in restrooms and locker rooms…”

Last year, Herndon High School, Herndon Middle School and Cooper Middle School strengthened their cell phone policies, which motivated Fairfax County Public Schools to implement a county-wide policy. The policy is a significant shift for students who previously could use phones in class when permitted by teachers. Prior to the update, the SR&R did not have established rules and consequences for phone use during class time.

“We were hearing from many teachers that the cell phone use after COVID was affecting their ability to teach effectively,” FCSB Dranesville District Representative Elaine Tholen said. “Several schools tried to reduce cell phone use and saw a positive difference. We asked principals what they were seeing and what their recommendations were for cell phone use. Not all agreed, but many felt that a district policy would be helpful for them.”

Administrators are overseeing school-wide implementation to ensure that students understand the new phone-use expectations and that the policy is enforced.

“I’ve been going around, looking at the different classrooms. It’s with the younger ones, the freshmen, who are more of the ones who want to take out their phones,” McLean High School principal Ellen Reilly said. “I think the challenge is … if one teacher allows it, then other kids are going to come in and say this teacher allowed me. We all really need to stick together and stick with each other to enforce [the policy].”

Although the phone-use policy is intended to reduce distractions and improve the learning environment, a significant portion of the student body does not support the changes.

“I do not agree with the new phone policy changes,” said senior Josh John, who is a Student Advisory Member. “I find comfort in having [my phone] with me during class. I believe that my peers share my opinion that the new phone rules are unnecessary. People still pay attention while having their phones out, and I never saw it as a problem or distraction last year.”

Many teachers were initially unaware they would only be permitted to allow students to use their phones to participate in classroom activities. On August 25, McLean teachers received an email from Reilly clarifying that students should not use phones at any point during class time even when the class is not engaged in a lesson.

Although eliminating personal phone use during class was intended to increase student engagement and learning, some believe the rule is too harsh.

“The frustrating thing is that even when students are done with schoolwork and given free time by teachers, they still aren’t supposed to be on their phones,” said senior class representative Max Blacksten. “I have seen resentment of the new policy from many students at the school. I don’t think anyone likes it.”

One of the motivations behind the policy is to help students relieve stress; some, however, are concerned that the policy will make students more anxious by preventing them from accessing their phones during class.

“The only benefit I can see [from the changes] is slightly increased productivity, at the cost of increased stress and anxiety in the student body,” John said. “I know people, including myself, who go on their phones for short periods during class to de-stress and reset their brains. I never saw this as a problem and think it could benefit my productivity.”

Tholen explained that administrators, teachers and students at the schools that strengthened their phone policies last year ultimately felt it improved their schools’ environments and decreased phone misuse.

“Of course with anything new, there will be some resistance, so teachers may need to deal with that. I am hopeful that students and staff will be willing to give it a try,” Tholen said. “I will be communicating with my schools over the year to see what adjustments may need to be made to make this as successful as possible.”

Administrators will be using a system in which teachers first warn students to put phones away; on the second offense, teachers can call a student’s parents. On the third offense, students can be referred to their class administrators, who, according to the SR&R, can issue a Level 1 to 2 consequence for violations of the phone-use policy.

“The teacher would speak to the student personally and… if that doesn’t work, then they’re going to call the parent,” Reilly said. “The next [violation] would be a referral to an administrator, who would bring in the parent and the student at the same time to talk. Our advice is don’t bring the phone; you do not need the phone and it’s a choice to bring the phone, not a have-to.”

Students have expressed concern regarding the possibility of being referred to an administrator who can place phone-use violations in a student’s record as a disruption or insubordination.

“My teachers have made it clear they don’t want to see phones in class, with one noting parents will be called the second time a student has their phone out, and they will be referred to administration the third time they have their phone out. Three times throughout the school year… resulting in referral to admin seems extreme,” Blacksten said. “I think the phone policy in particular is making students even more resentful of administration and the [strict] policies which are being enforced.”

Administrators hope implementation of the phone-use policy will teach students lifelong lessons and create a positive learning environment in which students reduce their reliance on phones.

“As one teacher said, [students will learn] the art of being bored. It’s okay to stare out a window and not have a thought in your head,” Reilly said. “It’s okay and I think it kind of brings us down a tad, not looking at the social media and getting all caught up in everything.”