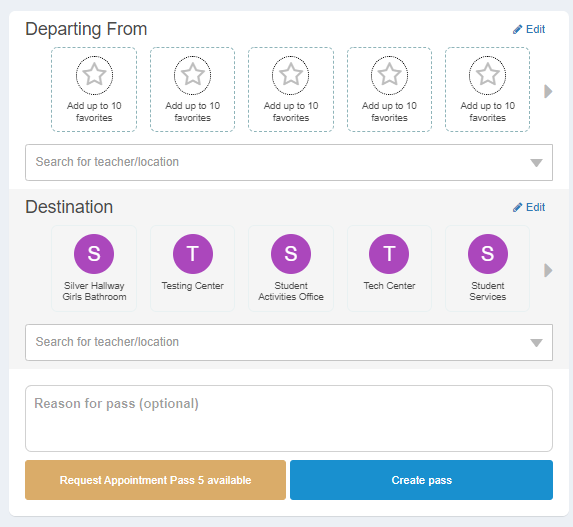 Students can submit a request for a pass by indicating the designated location to their teacher.

The system is intended to monitor the flow of students during class periods through its online database. When a student needs to leave class, they send a request to their teacher virtually. The teacher then approves the request, which excuses them to go to the location they requested.

“If you want to go to the bathroom, all you do is go on your computer [to the e-hall pass link and select the bathroom]. And then your teacher will get a notification to confirm it,” McLean Principal Ellen Reilly said.

In the past year, McLean has seen a spike in hallway loitering and students skipping class, which the school district hopes the e-hall passes will solve.

“We need our culture back,” Reilly said. “[In the past], we used to have clear hallways and people were always in the classroom. Students need to stay in class and that’s all we’re asking them to do.”

The McLean administration supports the passes, but they have been poorly received by the student body. Some dislike the passes’ hyperspecific locations—instead of a bathroom option, for instance, students must select the exact bathroom they will use. They argue the specificity is unnatural and makes it difficult to visit another bathroom when one is out of service or is overcrowded.

“I don’t like e-hall passes just because it’s really inconvenient and I feel like it’s a waste of time and energy,” freshman Goldie Woods said. “This whole time, I’ve only used it once since half of the teachers either don’t know how to use it, or just choose not to. During the one time I did use the e-hall pass, I submitted [a request], but my teacher took so long to accept it that I just ended up going after the class ended. Basically, it’s just a hassle for the teachers and the students.”

On the other hand, some teachers welcome e-hall passes because of their efficiency and the other schools’ previous success with it.

“It makes sense not to waste even 30 seconds writing out where students are going, the signature, the time and date when the [e-hall pass] does it all for you,” math teacher Steven Walker said. “I am for e-hall passes because I know it works smoothly at other schools. My wife is at Falls Church High School and they piloted [e-hall passes] there a few months ago. She said that ‘At first, kids will have polarizing reactions to it, but give it a week and it will be a different world.’”

The e-hall pass system, however, is not yet permanent; McLean is currently under a free trial of the system until the end of the year. If e-hall passes solve attendance problems, the school has the opportunity to purchase the service for next year.

“[The duration of the trial] is not that much time, but I do not want to spend a lot of money next year if it’s something that is not going to be effective or useful for us,” Reilly said. “We are looking for some good, honest feedback.”