Seniors prank the school on their way out 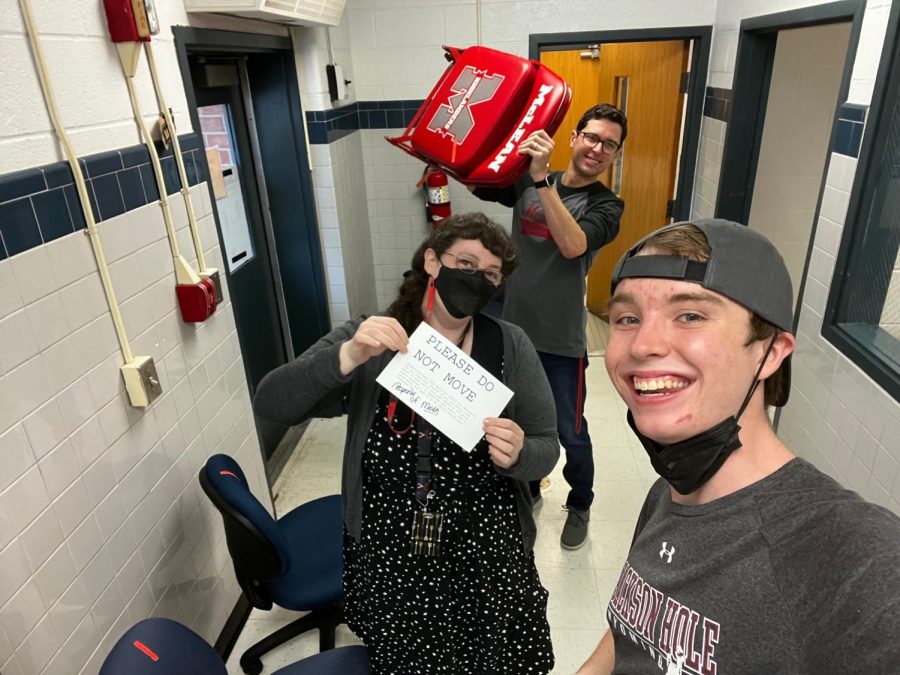 Senior JT Fulkerson poses with Mr. Walker and Ms. Frew after they found their missing chairs.

As the school year comes to a close, the graduating Class of 2022 has been sure to leave the administration and faculty with some funny memories. Four pranks this past week were carried out on admin all over the school, by different groups of organizers.

On Thursday, seniors JT Fulkerson and Nathaniel Hughes planned and carried out an elaborate prank on faculty from 12 departments. The two devised a plan to take three chairs from teachers from each department, and hide them in obscure locations. Then, clues were left for the teachers missing their chairs to seek out students dressed like the teachers in their “walk-up” portraits outside their rooms, who would then give a riddle if they were found and asked for the clue. After a day of confusion and frustration, teachers finally found their chairs.

“We were really happy with how harmlessly frustrated all the teachers got after a while without their chairs,”  Fulkerson said. “We hid them in places like sheds, closets, etc. Places most students and teachers might not even know exist in the school.”

But the two didn’t stop there. On Friday, they carried another two pranks, this time with some high profile targets: Principal Ellen Reilly and School Resource Officer Scott Davis.

With some help from school custodian Jose Martinez Callejas, Reilly arrived at school that morning only to find the furniture from her office set up nicely in her designated parking space, complete with balloons and flowers.

“Her reaction was priceless, and what made it even funnier was the oncoming rain. We didn’t let it last too long though, and we brought her stuff in before it got too wet,” Hughes said.

Still, the prankster duo wasn’t finished. In their boldest and most audacious prank, Fulkerson and Hughes stole and moved SRO Davis’s police cruiser. To distract Davis, and buy Fulkerson and his henchmen some time, Hughes set up in the school, cooking pancakes, eggs and bacon, and offered a plate to Davis. Meanwhile, with help from anonymous entities, Davis’s cruiser was moved to the grass next to the rock and filled with balloons.

“We left three stacked pieces of paper in his parking spot saying that the Class of 2022 took his car for a spin, and that we called chipotle to let them know he’ll be late to pick up his order,” Fulkerson said.

“He was not too happy for sure at the beginning, like he was demanding we give him back his car right away and cursing over his radio. He even posted an announcement to the TVs around the halls saying he needs his car back,” Hughes said. “Eventually he relaxed and found it funny, but he was pretty freaked out at first.”

When he finally found his cruiser, he opened it up only to find it full of balloons, which he popped with his keys.

“The cherry on top was when he popped the last balloon, for some reason right over his seat, which was full of confetti,” said Fulkerson, who then poured the rest of the confetti on Davis’s head.

The last and final prank of the day was organized by members of McLeadership and other students, and students from all grade levels participated in the “Anything But a Backpack Day,” where students brought an eclectic assortment of objects in place of their backpacks.

Some students opted for a modest approach, with many bringing a cardboard box or a laundry basket. A small group of extremely dedicated seniors went all out, walking into the school with unprecedented items such as a fertilizer spreader, and a Weber kettle grill.

“The dude I was going to bring as a backpack was unable to attend, so I just looked around my house for something and I found the grill,” senior Ben Kelly said. “Getting up the stairs was pretty hard, but the office kindly gave me an elevator key so it wasn’t too bad.”

The “Anything But a Backpack Day” was the perfect way to end the senior prank week, showcasing the brilliant spirit of the Class of 22 Highlanders, sending them out with a bang.

“I knew I had to go all out for this,” Kelly said. “It was the last time I’d get the chance to prank the school, and I had to go out in style.”