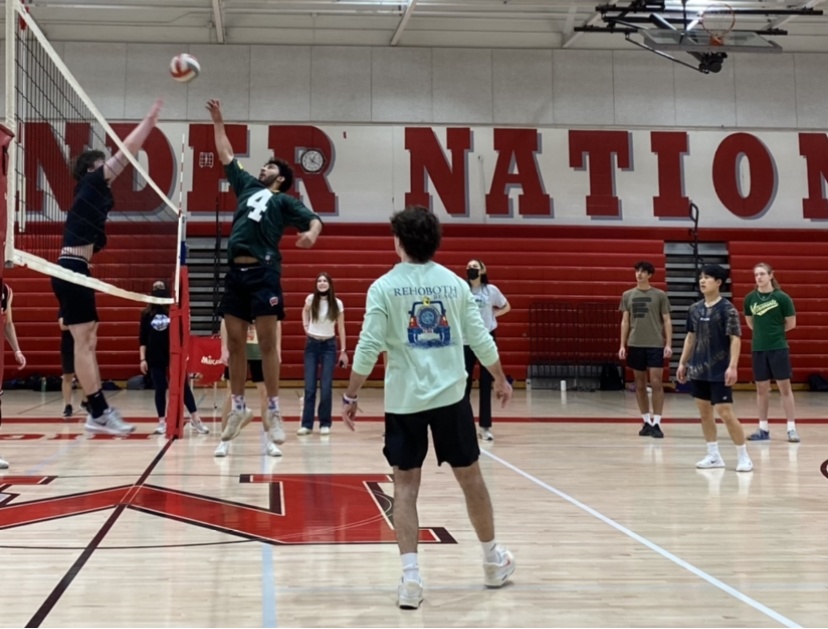 Senior Caden Hershberg and junior Max Warrell fight for the ball over the net.

The match was organized by McDance-a-Thon and the girls varsity volleyball team, and funds from the game went towards the Children’s national hospital. Prior to the match, juniors and seniors signed up to play on teams and Mclean girls varsity players coached them. The teams played each other last week during Highlander Time, and the winners of those matches advanced to the championship.

Many of the players had no prior experience with volleyball until before the game. Practices took place afterschool in preparation for the big game.

“[I’ve only played volleyball] in PE in middle school and freshman year, so it was fun to get back in because I hadn’t played since freshman year,” junior Charlie Jackson said.

With music blasting in the main gym, cheers that could be heard through the entire school and the crowd decked out in green for St Patrick’s day, the match truly felt unlike any other sports event hosted this year.

The juniors started off strong in the first set, scoring the first point and developing strong defense that managed to block out various hits by the seniors. However, the seniors matched their energy, continuously keeping the ball in the air.

“We had a 30-something hit rally where all 6 seniors on the court got a touch. There were a few crazy saves in there, and it ended with a spike from Nicholas Halteh,” senior Charles Tang said. “The entire student section was fired up, and so was our team. It was definitely one of the best points we played in the game.”

The juniors managed to keep their lead, and when the first time out was called, they doubled the seniors’ score by 12-6. The long rallies between the two teams increased tension throughout the gym.

“My favorite part was when they had the really long rallies… It was really hyped, especially when they got up really high and then spiked it over, it was really fun to watch,” junior Abby Chung said.

Despite the seniors continuing to play hard, they weren’t able to catch up to the juniors, who won the first set 25-18.

“I watched the practice that the junior team did today, and they’re all very athletic and their verticals are really high, so I didn’t really doubt them,” Chung said.

The second set followed with the seniors taking the lead. They managed to score the first point, but the advantage was gone as soon as they earned it. The juniors quickly gained a two-point lead against them.

By the next timeout, the juniors were in the lead by 16-12 and continued to widen their lead to 23-17. Despite being at match point, the seniors were still confident that they could catch up.

“Our team was confident the entire time. Despite falling down on the first set, none of us seemed to be worried,” senior Charles Tang said. “We went into the second set expecting to do well with our halftime adjustments. Unfortunately, the juniors just fought with more intensity and it got them the win.”

The juniors took the second set, ending the match and winning the game 25-18.

“It was fun but definitely something that we expected as a team,” Jackson said. “Right when the roster came out, before we even practiced, we kinda knew no one was gonna compete with us.”

Despite the number of boys who enjoy playing volleyball, it is only offered as a sport to girls. The Volleyboys event gave them the opportunity to play and represent their school in some fashion.

“I think they should actually make competitive volleyball for boys in high school, because so many people want to do it,” Chung said. “There were at least 20 people who signed up for the junior team. I think it would be great if they made this a more consistent thing.”

The juniors are set to play the faculty next week during Highlander Time, and they’re hopeful they can continue to compete.

“My favorite part is that it means we get to keep playing,” Jackson said. “First against the faculty, and then hopefully against Langley or another school.”