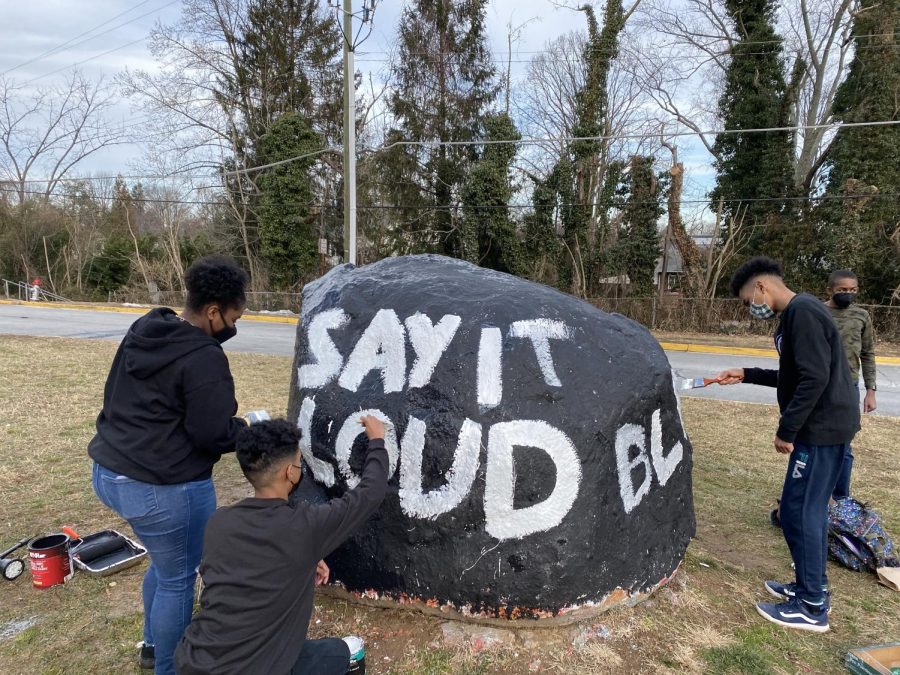 Members of McLean’s new Black Student Union (BSU) began Black History Month by painting McLean’s rock black. They wrote phrases such as “BLM” and “Say it loud, I’m black and I’m proud.”
“Painting the rock meant a lot to me because we were able to spread awareness of the different races at McLean,” junior Zachary Mitchell said.
Juniors Jasmine Andresol and Sevyn Walton took on the task of creating McLean’s first Black Student Union (BSU), and it has already sprung into action.
“I dreamt of creating a Black Student Union for a while, simply because I wanted to be a part of one,” Andresol said. “Being a Black student at McLean can be isolating, as our experiences aren’t shared by 97% of the student body. By having a BSU, a safe space is provided for us to truly express ourselves and feel empowered.”
As a new teacher this year, English teacher Ajane Santora-Fyne, said she felt honored to sponsor the BSU.
“As one of very few Black females in the building, when asked to sponsor the BSU I felt as though it was the perfect opportunity for Black students at McLean to be able to create a community for themselves,” Santora-Fyne said.
The organization will provide members with support to overcome difficult challenges posed by racism and violence from the past.
“There’s always a lingering question in my mind: why not sooner? A BSU club in 2012 could have been there for students grappling with the death of Trayvon Martin. In 2013, they could have been there when Eric Garner was choked to death,” Andresol said. “I’m optimistic that this club is here to stay for a while and we can guide students through any difficult time period of further racial violence in America.”
The BSU has about 30 members who describe the club as an empowering organization that has made them feel more accepted.
“I decided to join the BSU because I wanted to connect with the other Black students,” junior Adona Amanuel said. “I joined it because I wanted to be in a space where everybody else looked like me without having to worry about feeling like I was different from everybody else.”
The BSU allows members to come together and discuss topics that relate to them and their experiences. Their goal is to foster a place of belonging and community at McLean, and usually meets every other week. This month, the club has been meeting every week.
“In terms of discussion topics, we discuss HBCUs, Black hair care, Kwanzaa, important Black historical figures and recent incidents of racial violence,” Andresol said.
The club is also open to inform the entire student body about the importance of Black History Month.
“Black history outside of a few key figures isn’t taught in school,” Amanuel said. “It’s important to highlight this month because we must pay tribute to and remember the people that came before us that made history and paved the way for us to do the same.”
The BSU is planning to be present and active for the rest of the month. Some of the events they have planned include holding an informative meeting on Black History Month on Feb. 16, and having a Black Out Spirit Day on Feb. 18.
“Students at McLean should take the time to explore the history of Black people during this month and in the future,” Amanuel said. “During this month social media will bring light to many aspects of Black history they have probably never heard about.”
When February comes to an end, the club hopes to remain focused on Black culture and history—with the same level of engagement as before.
“Black history is not just confined to a month, our history happens every day,” Andresol said. “Whether we’re in April, August or November, know that we still matter, and that any day is a perfect day to remember and commemorate Black culture.”