12 Highlanders honored among the best players in the Liberty Conference 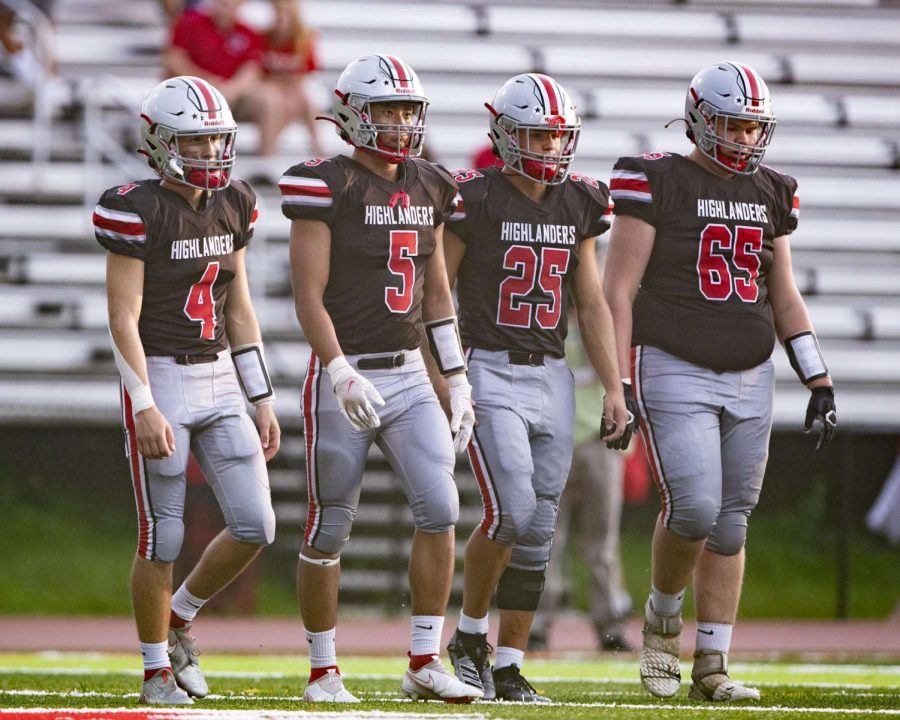 Jacob King walks out with the other captains before the West Potomac game. King was selected to the Second Team as a linebacker.

After McLean’s football season came to a close, coaches from every school in the Liberty District convened to compile the All-District teams, where the best players in the conference were selected for a roster which honored their skills on the gridiron in the 2021 season.

12 Highlanders were given the title of All-District, with several players doing it at two positions. Wide receiver Nicholas Halteh and kicker Tyler Fontenot were the only Highlanders selected for the First Team, and the two also earned spots on the Second Team for their skills at kick returner and punter, respectively.

“It’s an honor because I worked really hard,” Halteh said. “My teammates helped a lot to help me get that honor.”

Fontenot’s success at the kicker and punter positions was a huge boost for the Highlanders. Fontenot missed only one field goal all season, and that consistency netted him the First Team achievement.

“I’m definitely honored,” Fontenot said. “I know Langley has a four-star [kicker] and the Herndon kicker is really good as well so to be labelled as the better of the three is really special to me.”

McLean’s coaching staff helped out the Highlanders a lot this year as far as getting their players to get to the next level.

“The coaches really helped me develop as a player to become the player I am today,” Halteh said.

Most players attributed a consistent practice regime to their overall growth as a player.

“Lots of practice [helped me improve],” Fontenot said. “Coach Scholla has been great about letting me work off to the side to get better, as well as offering his advice when he was able to.”

Football is the ultimate team sport, and that is reflected with the player’s thoughts on their teammates making high achievements.

“It almost makes me happier to see them on the list than me,” Fontenot said. “I know how hard they work and to see that paying off for them is great.”

The Highlanders will have five players who were given All-District nominations return for the 2022 season. Their prowess on the field, along with a mesh of new and returning players, will surely make for an electric McLean team when the 2022 season arrives.