Girls volleyball steps up their fan themes for games 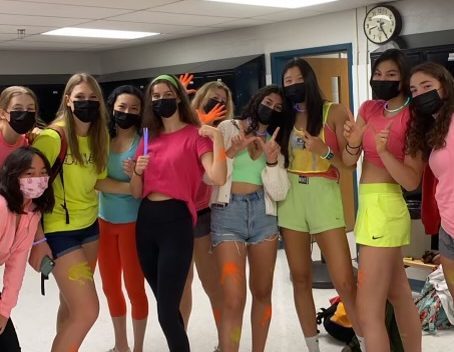 Over the course of the fall sports season, there have been many new successful dress-out themes at McLean. The growth in these themes is attributed to McLean’s volleyball team (dubbed “McVolleyball”), whose electric play has seen wins take place in front of fans dressed as Tom Cruise in Risky Business and even Adam Sandler.
“In my experience, this year I think we really stepped it up with our themes,” senior varsity player Ella Park said “I think it also helps that recently we’ve had such a supportive student section that also participates in the themes which really makes them special. During my freshman and sophomore year, we never did creative themes like white lies [and] Adam Sandler.”
In the past couple of months, McVolleyball has gotten more and more creative. The team’s creative process leaves no player out, as every member shares their ideas for fan themes.
“The creativity came from…a group that was down to do fun themes and our team compensating for missing themes last year,” senior varsity player Nicole Mallus said. “Everyone has had some great suggestions throughout the year.”
The support from McLean students has not been lost on the players, because they always notice their fellow Highlanders cheering from the bleachers in the volleyball team’s themes.
“It’s…fun having so many students supporting us. I think having a student section really helps with the energy and intensity on the court…especially when we’re up or there’s a big play,” Park said. “I think as the season went on and we started winning more, we got more and more students to come, and almost all of them dress in theme.”
With the team’s massive success in tournaments and the popularity of previous themes, volleyball players have been coming up with new ideas hoping to find their next big hit.
“We either get inspiration from past years or just try to come up with something new and creative together,” Park said. “If a theme is basic that we’ve done before, like blackout, we sometimes try to take it a step further like when we did a funeral blackout, just to make it more fun.”
Unlike football games, McVolleyball does not have to get official approval from athletic director Greg Miller. Instead, they get to decide together on their own channels.
“Usually we decide at the end of practice or in our team group chat and we all vote on them together if there are different preferences,” Park said. “But we really haven’t had any disagreements so far.”
Out of all of the themes, fans seem to be most enthusiastic to partake in unique ideas, themes that go beyond a simple “color-out” common during football games. McVolleyball strives for the fan enthusiasm, hoping to keep it up as long as they can.
“It is so fun to have [fans] in the gym and feed off of their energy,” Mallus said. “[They] are always super welcoming of any theme, we do which makes things even more fun.”