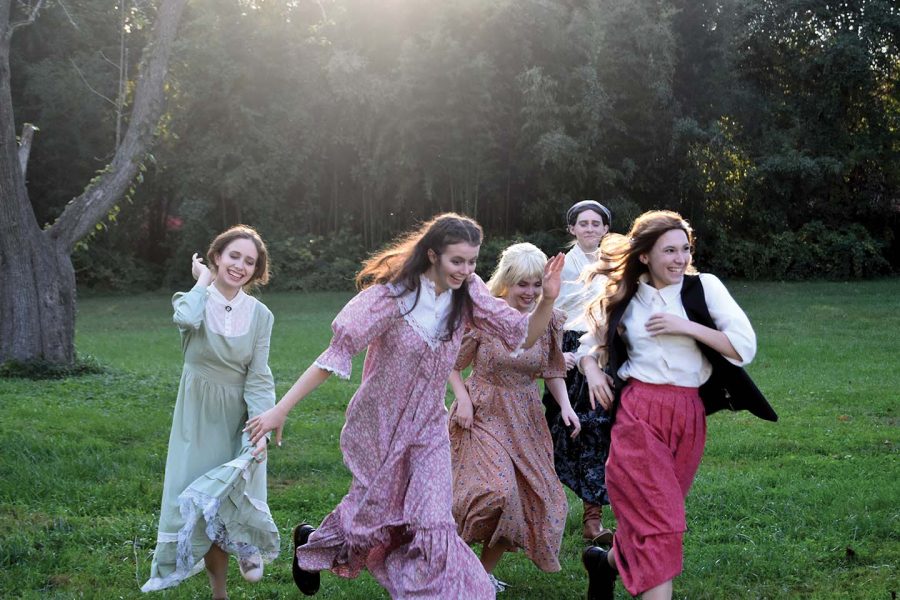 Kirsten Knight as Meg, Kiera Murphy as Beth, Franny Hemsley as Amy, Kirsten Tierney as Marmee and Kylee Majkowski as Jo run through Lewinsville Park during their Little Women publicity photoshoot on Oct. 14.

The auditorium has been transformed into a scene from the Massachusetts Civil War era. As the overhead lights dim, TheatreMcLean travels back in time to the 1800s with a musical adaptation of the classic novel Little Women.

Following four sisters growing up in Concord, Massachusetts, during the 19th century, Little Women details their coming of age as they find their places in the world.

“It’s very family friendly and perfect for everyone to come and see,” said junior Elizabeth Nourse, the play’s assistant director. “It’s going to be very abstract and dreamy with these over-the-top characters and beautiful songs.”

The return of live performances is a welcome change from the virtual shows of last school year, but this transition back to normalcy has not come without challenges.

“Theater is all about connection, and you can’t connect with people online,” theater teacher and director Phil Reid said. “The most challenging bit is dusting the cobwebs off since it’s been so long. It’s like riding a bike—we’re just getting back into it.”

Despite these minor bumps in the road, TheatreMcLean has established a talented cast of performers. Actors were cast based on how well their personalities matched with the characters of the story. Main female lead Kylee Majkowski equates her character, Jo March’s, disposition to her own.

“Jo is a very ambitious, passionate girl. She’s not a pushover for anybody, and that’s definitely something I can relate to,” Majkowski said.

Sophomore Nathan Bass, who earned the lead male role of Laurie in a main cast dominated by upperclassmen, is proving himself to be one of the production’s biggest assets.

“It’s a lot of fun being able to work with people that are [a couple] grades above me,” Bass said. “I’m super happy and lucky to have gotten this position.”

Luck is not the only factor that contributed to his casting. Bass has participated in theater since kindergarten and has developed quite an impressive skillset.

“He was cast because he was best for the role,” Reid said. “I really don’t believe in seniority—if you’re good, you’re good.”

To perfect their portrayal of the characters, the actors began rehearsing in mid-September, returning to a sense of pre-COVID normalcy.

“We worked with what we could online, but I think everyone’s just excited to do what they thought they signed up for when they chose theater,” Majkowski said.

For Bass, his first in-person rehearsals have been very rewarding.

“It’s a time to develop what I’m doing for the actual musical,” Bass said. “But there’s a balance between the work and fun that really helps it to be an environment that the other actors and I want to participate in.”

The cast and crew’s hard work will pay off Nov. 18 when the show opens at the McLean auditorium.

“It’s our first big show that we’ve done in a long time,” Nourse said. “It’s going to be fun.”

Little Women will be shown November 18-20 at  7P.M. and November 20-21 at 2P.M. Tickets can be found here. After Little Women closes, TheatreMcLean will get right to work on its next performances.

“We still have two other shows this year that we are also looking forward to,” Nourse said. “We welcome everyone who is interested [in the TheatreMcLean community], and we have tons of shows and activities planned for this whole year.”