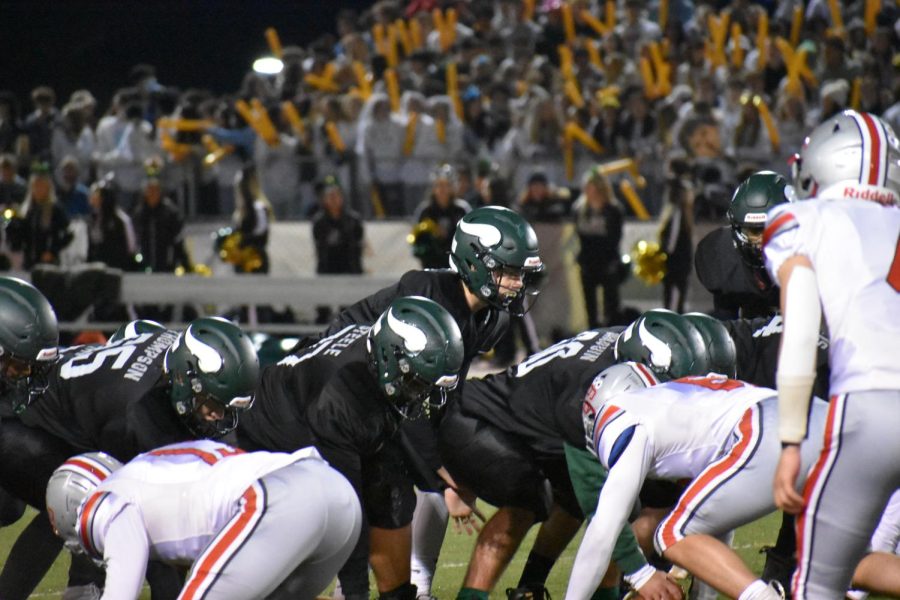 McLean's stands hold their breath as the Langley Saxons approach the goal line with seconds remaining. The Saxons were able to punch it in with eight seconds left, giving them the victory.

Students and administration who arrived early to school grounds on the morning of Friday, Nov. 5, were greeted by a repainting of their school’s rock and sidewalks, courtesy of the Langley Saxons. Reading “F–k McLean” and “McLean sucks,” as well as other vulgarities, McLean students, dressed in all black, scrambled to reclaim their school, painting “THIS IS OUR TOWN” in response to their crosstown rivals.

Tensions could not have been higher heading into the 7 p.m. showdown. With parents and students packing into the stands well before kick-off, the stage was set for the annual McLean-Langley face-off.

“Everyone was excited about the game all day. [The Langley game] is something everyone looks forward to all year,” said senior Brigham Devore, a former varsity football defensive end. “We got there early to get loud and ready for the war on the field in front of us.”

As the game got underway, Langley punched it in early with a 36-yard run, opening with a 7-0 lead against the Highlanders. Now receiving, McLean’s star senior Nicholas Halteh granted the Highlanders generous field positioning, which they used to march down the field, ultimately ending with a scoring quarterback sneak for sophomore Manoli Karageorgos. With the game tied at 7 apiece entering the second quarter, fans were left on the edge of the seats.

“The game was super exciting and everyone was super hyped. Our student section did an awesome job showing out and cheering on our team,” Devore said.

Entering the second quarter, the offensive showcase continued for both sides. After an onside kick recovery by McLean, the Highlander running game picked up speed, particularly through sophomore tailback Kaelan Ferris. As Langley’s defense began blitzing middle linebackers to stop the run, Karageorgos aired it out to Halteh for a 46-yard bomb down the left sideline for a Highlander touchdown, giving McLean the lead 14-7.

“Because we had been running it with such success, we anticipated that Langley would change their defensive formation to counter,” senior tight end Caden Hershberg said. “So when we isolated Halteh on that pass, we knew it was going to work.”

Closing out the first half, Langley was able to mount a long drive, resulting in a field goal which made the halftime score 14-10.

While McLean’s offense continued pressing on through the beginning of the second half, the Highlander defense struggled.

“Although we had some good looks, our defense played pretty lackluster at times during the game,” Hershberg said.

Allowing the Saxons to mount a grueling 15-play drive down the field, the Highlander defense conceded another touchdown, making the score 14-17 for Langley.

Then, as Langley booted it off to the Highlanders, return man Halteh scored an incredible 90-yard kick return touchdown, passing and making Saxon defenders miss, leaving them in the dust. Just like that, after sophomore kicker Tyler Fontenot’s PAT, the score was 21-17, back in McLean’s favor.

The intensity in Langley’s stadium was buzzing as the game entered the fourth quarter. With nearly four minutes left until the end of the game, McLean students emptied the stands, all ready to rush the field in victory and celebration. With the Highlanders nearing the end zone again, victory seemed guaranteed. However, poor play calling from McLean’s sideline resulted in a failed fourth down conversion in the red zone, their second of the night.

“There was some interesting coaching calls that I didn’t agree with, including how we went for it twice on fourth down when we could have kicked field goals,” Hershberg said.

This was also when McLean’s defensive struggles would finally catch up to them, allowing Langley to continuously move the chains. Battling the clock, the Saxons were able to march down the field, mounting a 74-yard drive that ended with a five-yard touchdown pass with eight seconds left in the game.

With spirits crushed in the McLean stands, players and fans alike knew the game was over.

“The loss to Langley was a very unfortunate way to end my football career,” Hershberg said. “All of us have donated so much of our time to this sport and to lose our final game like we did was heartbreaking.”

As the game clock hit zero, the Saxon sideline rushed the field and McLean players and fans alike were crushed. While the Saxons got the best of the Highlanders this year, the McLean football team remains optimistic, proud of a hard-fought season and looking to the future.

“It was hard to lose our last game, especially against Langley,” senior defensive end Matthew Espinoza said. “I wish we came out with a win but, looking back, it was a great season and I am very appreciative of all the friendships that came out of McLean football. [Most importantly], the coming years of McFootball look bright, and I look forward to watching my teammates take on more McLean-Langley battles in the future.”