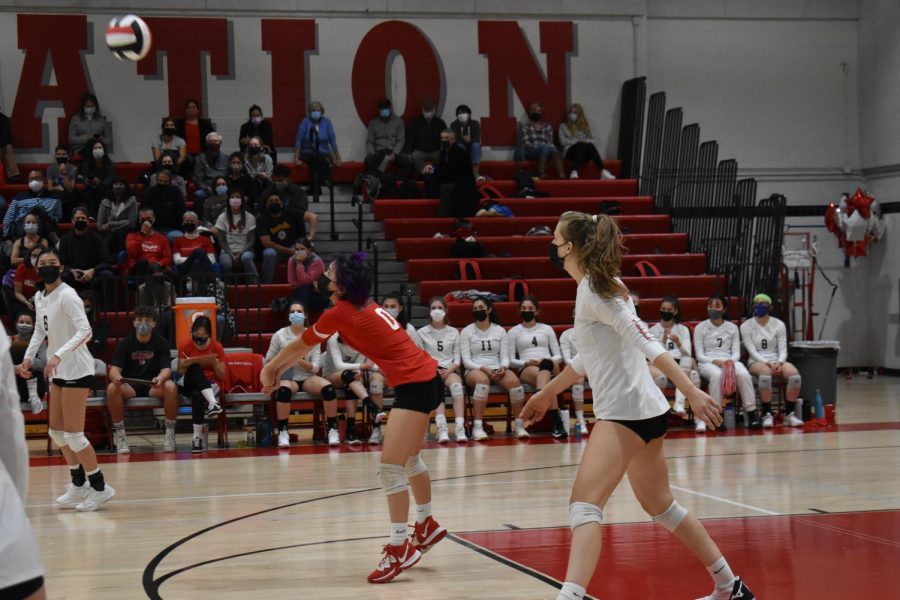 Eyes on the Prize—Junior Charlotte Carson and senior Nicole Mallus watch as the ball leaves McLean's side of the net.

Parents and students filed into McLean’s lower gym on Nov. 3, ready for a hard-fought battle between the McLean Highlanders and the Centreville Wildcats in the volleyball regional quarterfinals. The game ended up lasting barely over an hour, with McLean demolishing their visitors en route to a 3-0 sweep.
McLean entered the postseason as the top seed in the Liberty District, which truly exemplified all the hard work they have been putting in since the beginning of the regular season in August.
“We haven’t really prepared to play a specific team,” senior Ella Park said. “We just focused on our side of the net, controlling what we can, and then making sure we have all of our basics set for when we do see something new or uncomfortable.”
Practices became more intense as quarterfinals approached, with the team practicing a total of two hours minimum every day before their district championship match against Herndon on Oct. 28 and their match against Centerville.
“We focused most on simple ball control drills, serve-receive reps, and intense gameplay with multiple unique lineups,” varsity head coach Samantha Stewart said.
To spectators the game was an obvious win, but the team and coaching staff saw it differently. The team’s energy seemed to be lower than usual and many previously unstoppable players missed easy returns, costing the team several points.
“While I’m proud of the team for winning, the whole squad and coaching staff knew that we didn’t play well,” Stewart said. “There’s a big difference between our focused, intense game play and what we displayed last night.”
The players also felt this decline in energy, but are choosing to look at it as an opportunity to improve before their next game.
“I think sometimes you have to have these [games] so you can just sit back and focus on your skills,” senior Nicole Mallus said.
McLean was still able to pull through and beat Centreville in three sets, with the Highlanders winning by at least 10 points in all three.
The team is focusing on keeping up their high level of play ahead of their Regional semifinals game against the Langley Saxons on Saturday, Nov. 6th at 4 P.M.
“We are going to work so hard [for semifinals],” junior Charlotte Carson said. “Every practice, we are going to come prepared and hustle.”

The team is also trying to make sure they maintain their confidence and tranquility, which have been some of their biggest strengths thus far.
“An important part of the postseason is to not psych yourself out,” Mallus said. “It is a big deal since [these games] are single elimination, but it’s only going to hurt you if you stress out about it instead of focusing on how you play.”
McLean’s meeting with Langley on the 6th will be their third meeting with the Saxons this season. The two teams broke even with each other in the regular season, with each squad sweeping their rival on their home court. McLean will have the advantage on that front, as their high seeding has earned them home court advantage against the Saxons.
“Looking forward to Saturday’s match, we’ll be focused most on bringing high energy and consistent play to the match via blocking out runs by the other team, letting errors fall off our shoulders, and recommitting to the game every single point,” Stewart said.