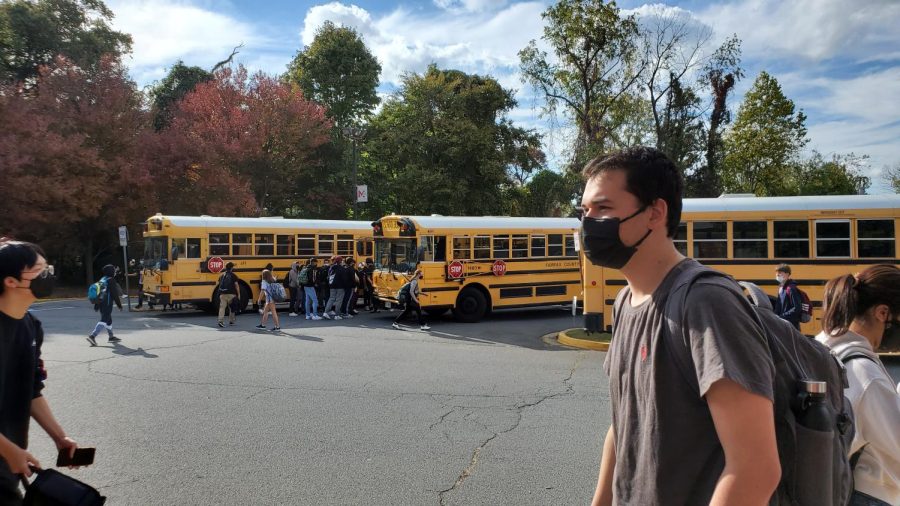 Students line up near on-time buses at the end of the school day. Late buses will fill the remaining spots on the swaths of empty pavement as they arrive.

For years, a bus driver shortage has plagued the affluent McLean & Langley pyramids, economically isolated from the lower-income regions of Northern Virginia that attract bus drivers for Fairfax County Public Schools (FCPS). It was easy for the school district to work around the shortage in previous years, but with a recovering pandemic economy, retirement-age workforce and too many uncovered routes, the problem is now inescapable.

“Before COVID, our shortage countywide was somewhere around 80 buses that d[idn’t] have drivers. This year, we’re around 180 to 190,” said Area 4 Transportation Supervisor Thomas O’Keefe. Area 4 is the McLean & Langley pyramids, as drawn by the Office of Transportation Services.

Many riders have experienced some service disruption as a result of the shortage, particularly those far from the school.

“[The] bus is supposed to arrive at 3:35 PM,” sophomore Shanthanu Desai said. “[It only] reaches at that time sometimes.”

The severe shortage existed last school year too, but since so few students opted for in-person learning, multiple routes could easily be consolidated into one without posing an overcrowding risk to riders. Now, bus drivers must “double-back,” meaning they work one school route, then do another route for the same school immediately after. It has a compounding effect that progressively worsens as day continues.

Drivers stretched to their limit have been forced to make abrupt changes to service, like skipping stops on routes and leaving earlier than scheduled. The reasons for making on-the-fly decisions vary; a bus may be at capacity, for instance, which would result in delegating any remaining students to another bus driver.

“I’ve been late to class once,” said senior Vaneeza Pasha, who relies on the school bus to travel to and from an off-campus academy class. “Our bus apparently left early without me and…5 other girls, so the school had to bring another bus in.”

The district tries to avoid making the same drivers double-back for consecutive schools, but even then buses will be late. The shortage has rocked the entire transportation infrastructure to its core; two floaters, experienced drivers who served as backups in case others can’t come to work, are no longer an option. The supervisors who deal with administrative work must drive buses in addition to working their own positions.

Now, without floaters and enough drivers, O’Keefe and the bus supervisors must drive buses throughout the morning and afternoon. That spells trouble when a catastrophe derails the entire pickup schedule.

In addition to a prior starting pay increase, the school board voted to increase pay scales by 2.5% to entice more drivers into the school district. But riders who rely on the school bus aren’t going to see an improvement in service anytime soon: the shortage will be resolved around March 2022 at the earliest, according to O’Keefe. The main culprit is a slow hiring process that wasn’t designed to alleviate massive shortages.

“We send [bus driver applicants] to our training center,” O’Keefe said. “That is a five to six week process, and they accept about 20 students every two weeks…[and] it’s usually a 85-90% graduation rate.”

Without adequate staff to handle administrative work, bus drivers are beginning to fall behind in updates made at Gatehouse. The Here Comes the Bus app has faced reliability issues despite FCPS promoting it to families, worsening ties between schools and the families they serve.

“We have tablets on the buses [for the app] now,” O’Keefe said. “[Supervisors] are driving runs all the time, which limits our ability to train drivers…on this new technology.”

With conditions so unfavorable for the Office of Transportation Services, most hope is in the stellar performance of current drivers.

Nobody wants delays like this,” O’Keefe said. “It’s been amazing to see how willing to help and flexible they have been. They’re just constantly jumping in and offering advice.”