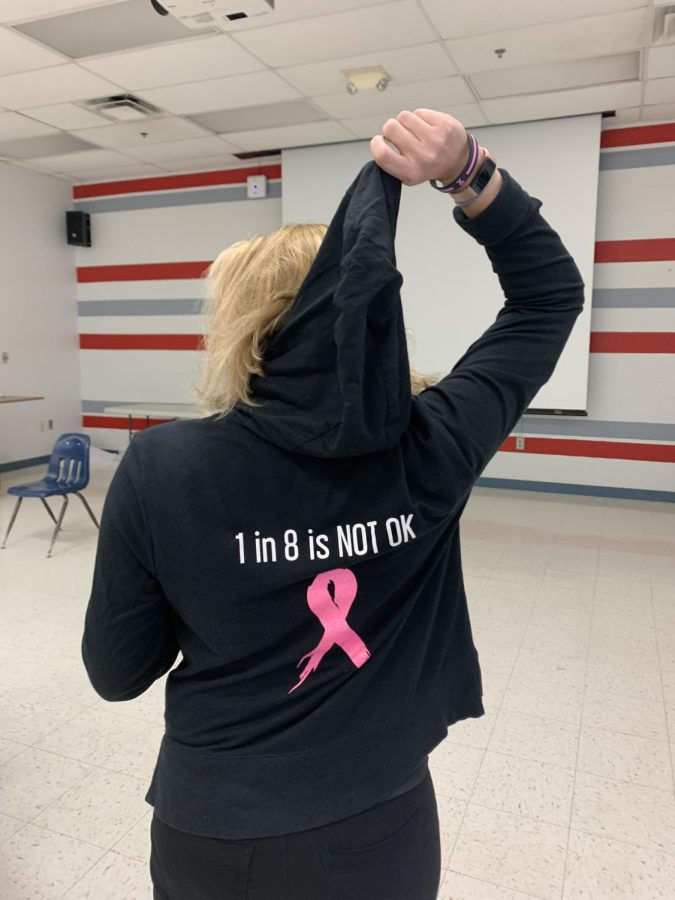 Debbie Feinberg holds up the hood of her shirt to show the statistics that 1 in 8 women will get breast cancer in her lifetime.

The meeting was open to the entire student body, and members were encouraged to invite their friends to maximize the number of attendees.

During the meeting, Feinberg, mom of a McLean senior, explained her journey from her diagnosis and healing journey in 2020 with stage 1 breast cancer.

Although the type of tumor Feinberg had was relatively non-aggressive, she still underwent a double mastectomy as well as a transverse rectus abdominis muscle flap procedure (TRAM) to reconstruct her breast tissue.

“I was 47 years old, and I never had surgery before,” Feinberg said. “It was a little nerve-wracking, but they did a great job and had gotten the cancer, so I didn’t need chemo.”

However, Feinberg remarked that the hardest part of the cancer process was the physical and mental recovery.

“Every time I open my medical records, it says cancer,” Feinberg said. Despite Feinberg’s struggles, she urges women across the world to get screened for breast cancer, as well as self-checking. At ages 40-44, women are urged to start annual mammograms, but if a woman has a family history of breast cancer, they should be screened even earlier at their doctor’s discretion.

“Mrs. Feinberg’s speech was incredibly powerful,” said Vidya Suri, co-president of the Girls’ Leadership Committee (GLC). “By understanding how breast cancer influenced the life of one woman, I was better able to understand the effect that it may have globally.”

Suri also explained that the GLC tries to balance their guest speakers, volunteer activities and team building projects, but hopes to incorporate more speakers like Feinberg.

“Events like this could teach students and teachers about problems such as this one, explaining their prevalence and ways to prevent the issue from occurring if possible,” Suri said.

Suri also believes that the key to implementing such events would involve gathering the interest of students throughout the school in order to expand the influence of GLC outside of the club.

“[Feinberg’s] speech was very informative, and I learned a lot about how to raise awareness for breast cancer, as well as proactive ways to make a difference,” junior Sydney Kosco said.

In terms of advice, Feinberg continues to emphasize the importance of women in the medical field, pointing to the audience.

“People in this room need to find the answer,” Feinberg said. “The way we do that is by getting women into science.”