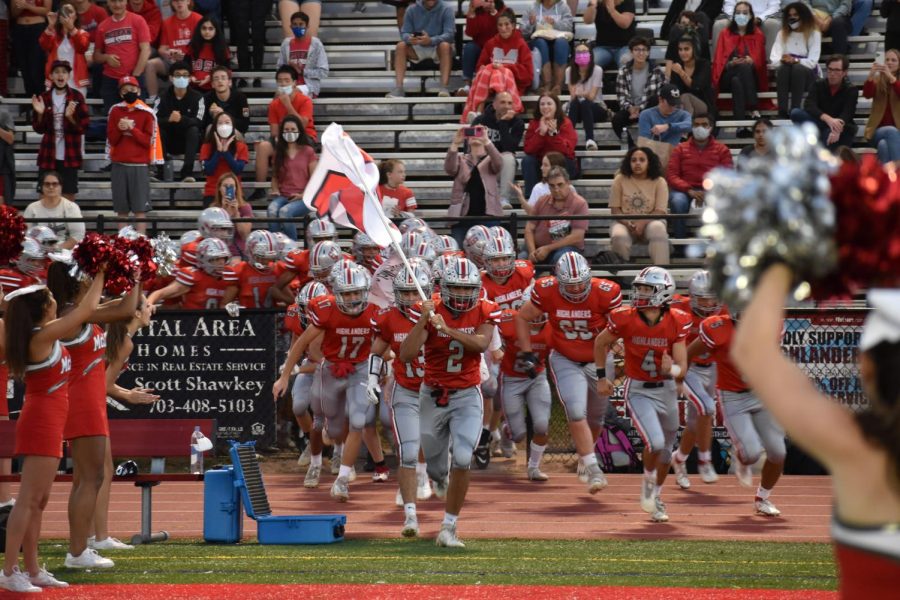 Senior Caden Hershberg leads McLean out onto the field wielding the McLean flag.

The McLean Highlanders football team prepared for the rapidly approaching Homecoming game against Yorktown High as energizing music blared over the loudspeakers of Basil Harless stadium. The student section began filling up with students dressed like royalty in accordance with the “Royal Red” theme. As the team ran out on the field, the zealous energy from the crowd was louder than it had been all year.
“Everyone is just generally more excited to be [in the stands],” senior Luke Valencic said. “They’re looking forward to the fun Homecoming weekend.”
For the players, it’s all about going week-by-week.
“We’ve had our ups and downs,” junior defensive back Mateo Short said. “We’re steadily improving as a team and we try to get the most out of what we have.”
McLean started the game on offense as Yorktown elected to defer after winning the coin toss. The offense started slow, with the running game being neutralized early. The punt unit came out after a three-and-out and Yorktown’s Mason Cunningham returned the punt into McLean territory.
On Yorktown’s second play, the ball ended up on the ground and in the possession of the Highlanders, but the referees ruled the ball-carrier down by contact before the ball came loose. Yorktown turned the play into positive yardage, with a big conversion through the air on third down. The Patriots punched it in on third down and goal, with their run heavy offense breaking through McLean’s defensive line. The score was 7-0 as the clock went to under 7 minutes in the first half.
Nicholas Halteh fielded the kickoff, bringing it up to the 38-yard line to set up the offense. McLean went to the ground on the first two downs with little success, leaving them with a 3rd and 8. The attempt was a throw short of the line of scrimmage which was wrapped up by the Yorktown defenders, and McLean’s punt unit came out again.
The Highlanders held strong on the next drive. The defensive line wrapped up the rushing attempts on the first two plays, and linebackers Jihao Liu and Max Geduldig teamed up for a sack on third down. This time, it was the guys in blue and white bringing their punter out.
The play-calling stayed heavily run-oriented, and the trenches for both squads became the focal point of the game. The early battles were won by the Yorktown defense, as McLean opted for another punt on a 4th and short in their own territory.
The defense started the game on a brilliant note, with McLean coach John Scholla switching up the schemes on every play. Sometimes the pressure came, sometimes they stayed back, but on nearly every run play the guys in red swarmed the carrier for little to no yardage.
The Patriots finally broke through, with a 55-yard rush by Xander Starks breaking through the endzone to expand their lead to 14. On the first play of the would-be bounceback drive, Manoli Karageorgos’s pass was picked off to give the Patriots great field position to start their fourth offensive possession.
The visiting team took advantage of the position, pounding the rock into the endzone to give the Highlanders a 21-0 deficit. The defense, consistent to how it had been playing to that point, kept the Patriots to multiple short gains. Unfortunately for the home team, their opponents continually used those short runs to whittle away at the Highlanders.
Punter Tyler Fontenot was having a busy day, with his punt being returned to the 8-yard line by the dynamic Cunningham. After stops on the first two downs, the Patriots were able to reach the corner of the endzone to extend their lead to 28-0.
McLean was still looking for a first down as Fontenot booted away his fifth punt of the game. Yorktown, hurt by a couple penalties on the drive, did not have the time to make anything out of the field position. The first half ended in a dull 28-0.

Kickoff coverage was once again a thorn in the side of the Highlanders, as Yorktown opened the half with a 97-yard house call to make the score 34-0, which soon became 35-0 as the Yorktown kicker improved to 5-for-5 on the day for extra points.
Running back Kaelan Ferris broke off his longest run of the day, carrying to the opposing 38-yard line before being brought down. The rushing game stalled out after that play, and on fourth down Karageorgos was forced to throw up a prayer, which was intercepted by a linebacker in the area.
The Patriots continued their pattern of outside runs, a strategy which the McLean defense was very used to after they had to deal with the Fairfax Lions two weeks earlier. The Lions’ tendency to use end-arounds and stretch plays prepared McLean’s defense to consistently shut the Patriots down in the area occupied by the defensive ends.
Both sides traded punts in the following possessions, and the Patriots had the ball as the clock flashed three zeros, leaving the third quarter with a 35-0 lead.
The fourth quarter was kicked off with an early touchdown from the Patriots, extending their lead to 42. Multiple infractions on special teams gave the Highlanders solid field position, but the drive ended quickly as Karageorgos threw his third interception of the night.
The defense stepped up right after, causing and recovering a fumble to give the Highlanders the ball back inside the 30. The ball saw little movement, and the drive ended after a run on 4th and 5 couldn’t be converted.
The game came to a close with the scoreboard reading 42-0. Fans left the stadium in droves after the disappointing loss on Homecoming night.
The Highlanders will look to rebound against Wakefield High School, where they will play their third away game of the season.