Review: Shang-Chi and the Legend of the Ten Rings

Marvel releases their first movie with an Asian-dominated cast. 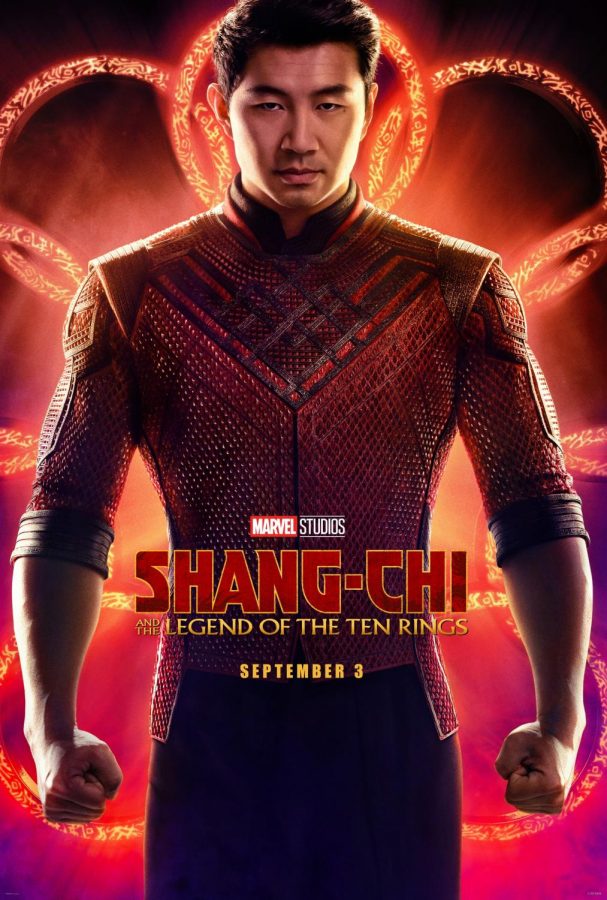 Marvel released the official poster for the movie in late June. The poster features the main character played by actor Simu Liu.

Sept. 3 marked the highly anticipated release of Marvel’s first movie with an Asian-dominated cast, Shang-Chi and the Legend of the Ten Rings. The theater was packed with fans excited not only to see an action-packed film but also many of the characters portrayed in the movie. It featured some big-name Asian actors and actresses such as Awkwafina, Michelle Yeoh, Ronny Chieng and Simu Liu.

The fight scenes in this movie are unmatched. Disney and Marvel studios outdid themselves with an amazing balance and variety of fighting scenes, ranging from 1 vs. 5 bus fights to two mythical creatures battling it out for the fate of humanity. The well-coordinated fights featuring many different characters had fans begging for more. The only downside was that there were occasional awkward slow-motion scenes that seemed out of place.

Awkwafina’s presence in the film’s star-studded cast promised a comedic punch, which held out throughout the movie. Ben Kingsly’s character, Trevor Slattery, complemented Awkwafina’s character in a way that made the movie’s humor more diverse and original, from the former breaking out into song during fight scenes to the former’s dialogue.

I was not impressed by the music selection of Disney and Marvel studios this time around. There were many good songs to match the plot of the movie; the swells of violins and orchestra as the story reached its climax were very fitting. However, I found myself wondering why there were peaceful flutes playing in the background of an intense fight scene. The music often felt out of place and didn’t always add the emotional intensity that a song like the Avengers End Game theme did.

The story and characters were well developed and thought out. The emotional build-up to some moments during the film was so unexpected yet perfect for the storyline. Each character felt unique, not trying to copy the model of previous character types in the Marvel Cinematic Universe. My only critique is that the movie sometimes felt like it wasn’t Marvel but rather a mix between Marvel and Godzilla due to the introduction of a whole new class of mythical creatures never seen before from the film studio.

I highly recommend this movie. It has an amazing balance of comedy, action and emotional build-ups. Marvel really outdid themselves with their first-ever predominantly Asian cast.