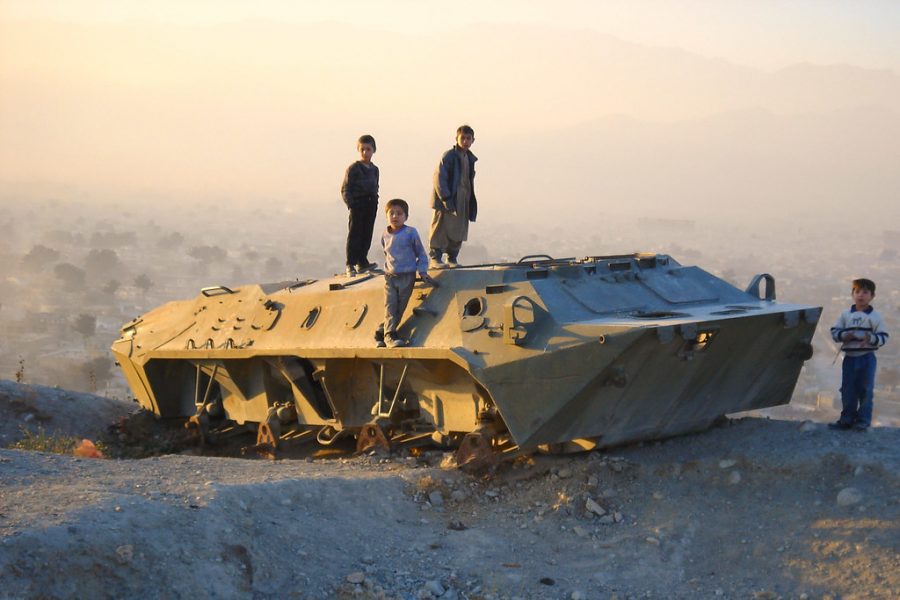 Desert Deployment — Three Afghan children stand atop a military vehicle in Kabul. The decade-long war against terror has affected the lives of many innocent civilians. (Photo obtained via Creative Commons)

To what extent do we have to police the world?

America’s involvement in other countries has been a point of tension in foreign policy since the second world war. Since then, debates surrounding such matters have even grown hotter. Generally, politicians have followed two schools of diplomatic thought. Firstly, there were those who followed Woodrow Wilson’s famous Fourteen Points, which advocated for the self-determination of colonial holdings in an altruistic foreign policy. Conversely, there were the likes of Henry Kissinger and realpolitik which asserted a more practical approach to international relations under Nixon.

The disaster in Afghanistan is doubly tragic as it betrays both ways of viewing America’s relationship with the rest of the world. On one hand, we have abandoned Afghan women and girls to a life of secondary status. On the other hand, during an age of great power rivalry and the pressing need to address terrorism threats from ungoverned lands, America just surrendered its best ally in the region and its airbase at Bagram.

America has always had a strong core of isolationists. And while following the 9/11 attacks, the majority of the country supported waging war on Afghanistan, Americans today similarly contend that our withdrawal is long overdue. While it is understandable that war-weary Americans prefer to focus on domestic problems rather than worldwide disputes, there is a glaring misunderstanding regarding our commitment to Afghanistan. We, as Americans and those with the capabilities to aid our neighbors, aren’t aimlessly deployed to expend resources and damage American morale. We are there to guarantee worldwide peace for all—a notion which was taken well for granted until the Taliban seized the country in 11 days.

And while the idea of removing troops from the country has been long established, the manner by which the Biden administration handled the operation was an utter fiasco. Complete withdrawal was irrational by that timeline and, by keeping even a couple thousand troops stationed, the United States could have spared the lives of many and those to come. While much of the blame may be placed on the Trump Administration and the strategic errors of the Doha Agreement in early 2020 which cut the legs out from under the Afghan government, the withdrawal was further incompetently executed by Biden.

“The responsibility for the [current] disaster in Afghanistan and the loss of the war lies squarely at the feet of President Biden, who made the decision against the advice of almost all of his advisors, military, European partners, and intelligence community,” said former CIA agent previously stationed in Afghanistan, Phil Raveling. “While it is certainly true that we made mistakes throughout the last 20 years, this is not really that story. This is the story of this president’s decision not only to leave, but the [terrible] manner in which he did. [It was] poorly planned and executed, which resulted in the bombing at Kabul airport and thousands of our friends, allies, and colleagues being left behind.”

Now, after the death of 13 US Service Members and at least 90 Afghans, President Biden has wilted under public scrutiny. Though promising to ‘strike back’ in a conference addressing the attack, his words ring hollow as the American people know that their options are quickly vanishing.

“[The withdrawal] has resulted in the loss of 20 years of American investment and the thousands of soldiers who died and others who sacrificed. It has also ushered in a terrorist regime and perhaps established the breeding ground for a new generation of Jihadist terrorists,” Raveling said.

With the threat of terrorist activity now quickly spreading throughout the Middle East, the Afghanistan conflict extends further homeward. Even in the area, Dulles International Airport saw a surge of Afghans pouring out of their now Taliban governed country, seeking refuge.

“The whole situation is messy. The way we left was the worst possible scenario. While the effects of our withdrawal won’t hurt us immediately, they will later on,” McLean senior Ryan Sribar said. “Our generation is going to be the one who has to go back and sort out what was left behind.”

And while American foreign policy was wrong by trying to westernize an ancient culture and pouring trillions of dollars to be frittered away to corruption, we can all be proud of our efforts for a higher purpose. The sudden realization of many Americans now that much of the Middle East and Central Asia is endangered should be a reminder to all of us: in order to ensure world safety and human rights, hard men and women must go to dangerous places to wage war on those who would turn back history.

Sometimes blood has to be spilled in such noble pursuits.