With a new age of popular youtubers developing, here are the top in each genre 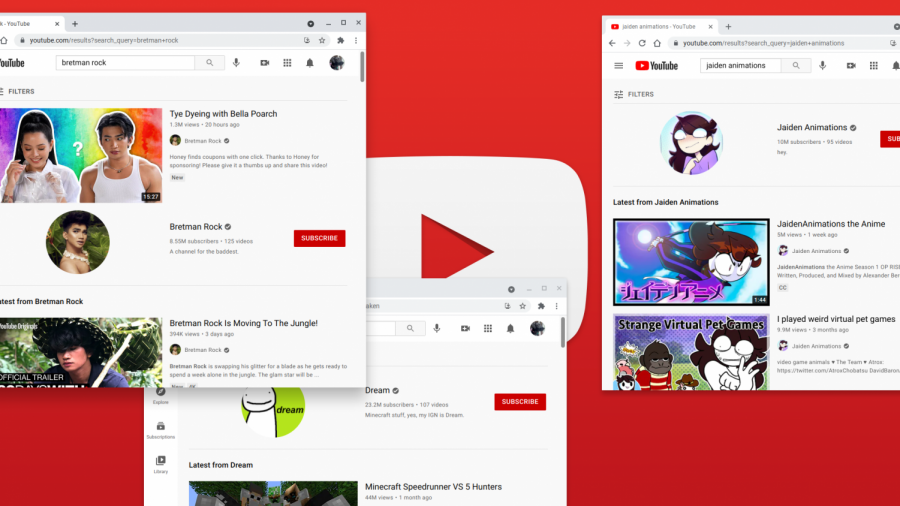 For over a year, the YouTube community has been growing like never before as many users stayed cooped up inside. With more viewers, the growth of content creators has been spectacular. Here are a few that exemplified particularly outstanding content.

Mr. Beast has a main channel with over 62 million subscribers and is known for his over-the-top-challenges like extreme giveaways. His overarching goal on YouTube is to build influence with his many channels and eventually open hundreds of homeless shelters and food banks.

Minecraft Youtuber DreamWasTaken has gained an unbelievable amount of popularity in the past year, gaining  22 million subscribers since [date]. His growing community consists of viewers interested in following his Minecraft Server’s roleplay storyline plot, as well as his YouTube channel series “Minecraft Manhunt,” in which he tries to beat the game while his friends try to kill him. “I am so happy for Dream and all he’s accomplished in the past year,” sophomore Tahlia Saalinger said. “He’s crazy talented, what with coding and all, and just a genuinely great person. I love being a part of the Minecraft YouTube community, and it started because of him.”

Find out which story character you are with this quick quiz!

Influencer Bretman Rock has explored all sides of YouTube, including dabbling in lifestyle videos, challenges, and even gaming, but his main focus is beauty videos. His channel of more than 8 million subscribers is sure to be of interest to watchers of all interests.

Comedian Sarah Cooper, known for her short comedic clips on Youtube, TikTok, and other similar platforms has grown tremendously since [name of series], the popular series where she impersonated former President Donald J. Trump. She has since moved on from the presidential impersonations and now posts comedic sketches with social commentary and stand-up.
@whatchugotformeHow to tiktok♬ original sound – Sarah Cooper

When it comes to smooth and groove, group BFunk has many Bollywood- and Bhangra-styled dances for everyone to get with it. For four years, they have been providing easy tutorials and choreographed dances for anyone with the energy to keep up!

Here’s the BFunk official website, with everything you need to know and more!

Their first ever video, with over 1.4 million views, is a choreography lesson on Lean on Dilhit, a Bhangra Dance.

American animator  Jaiden creates story animations of her life. “I started watching Jaiden when she had about 5 million subscribers, and have stayed ever since,” sophomore Rebecca Sullivan said. “I recommend her videos to anyone who likes stories, lots of personality, and really cool comedy skits.”