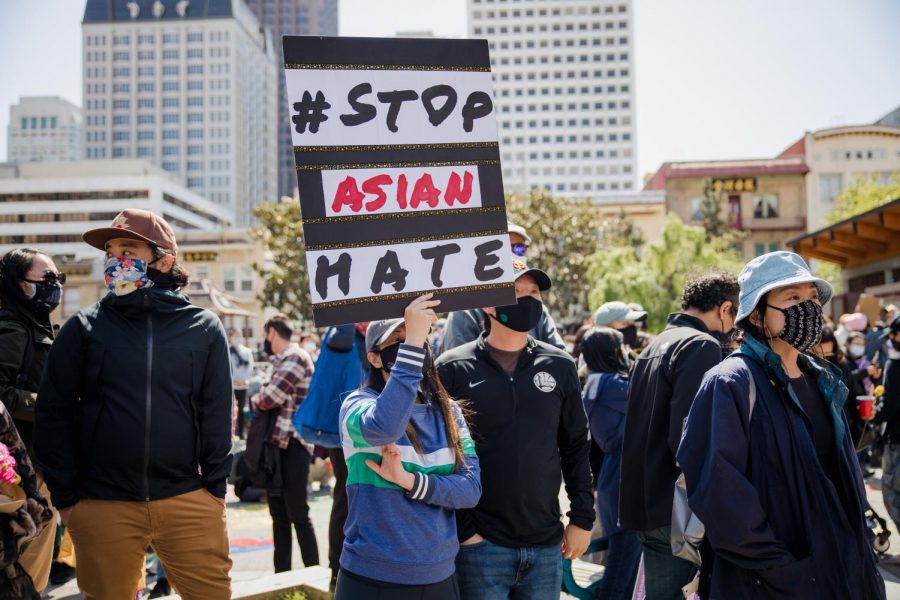 Protesting Prejudice — A woman protests at a 'Stop Asian Hate' rally in California. There has been a notable increase in the number of Asian hate crimes reported in the U.S.

Junior Jisoo Hwang was taking a walk in Franklin Sherman with her sister when something sudden and unexpected happened.

“While we were walking, I heard racial slurs like ‘ching chang ching’ behind us in the woods,” Hwang said. “It was scarier because we couldn’t see who they were as it was pretty dark…[me and my sister] basically had to run back home.”

Hwang had this experience last summer, just before the beginning of the school year. Over the year, the number of reported Asian hate crimes increased significantly, from mass shootings in Atlanta (where 6 of the 8 victims were of Asian descent) to verbal abuse

McLean has not been the exception of the larger national trend. On March 24, an email was sent to families in McLean High School and Longfellow Middle School regarding an anti-Asian incident on Longfellow school property that took place March 22.

“A FCPS student was on campus and approached by 4 individuals who allegedly spit at the victim and used anti-Asian racial slurs,” Dr. Jim Patrick, principal of Longfellow Middle School and Dr. Ellen Reilly, principal of McLean High School wrote.

The email also asked students who had “any information about this incident…[to] please contact your school principal and/or the Fairfax County Police Department.”

In an interview with the Washington Post, the father of the student, who wished to remain anonymous, stated that this was not the first time his son has encountered such “racial comments.”

“[The Longfellow soccer field is] a favorite place for him, he felt safe,” the student’s father said in the interview. “But it’s not safe anymore.”

Fairfax County has long been considered a relatively safe area isolated from racism and hate crimes.

“It was a big shock then,” said Hwang, recounting her experience last summer. “[The events happening in the area] show how McLean also has [racial prejudice].”

Some link the sudden rise of Asian hate crimes with terms used by some politicians and influential people regarding the COVID-19 pandemic. Former President Trump, for instance, repeatedly used the term “Chinese Virus,” instead of “COVID-19,” which was in fact a violation of World Health Organization (WHO) codes that strongly discourages the name of “geographical locations” in naming a disease.

Rep. Cohen calls out Trump: ‘When politicians use terms like ‘China virus’ or ‘kung flu’ to refer to COVID-19, it has the effect, intention or not, of putting a target on the backs of all Asian Americans’ pic.twitter.com/tWCzRNq9YO

A study later proved that influential people’s tone and vocabulary towards Asians had an effect on anti-Asian attitudes; it found an “increase in the anti-Asian sentiment” after the President’s tweet, where there were “797% and 17,400% [increases in the] #covid19 and #chinesevirus” hashtags on Twitter.

Now, one year after the pandemic began, anti-Asian sentiment is a widespread issue that Hwang believes needs to be addressed.

“I think it’s important for individuals to realize the situation and [recognize] how bad things are,” Hwang said. “It’s important to think back on our actions, and think whether we had been offensive to others at any point.”