Group of McLean skateboarders learn tricks and build skills together 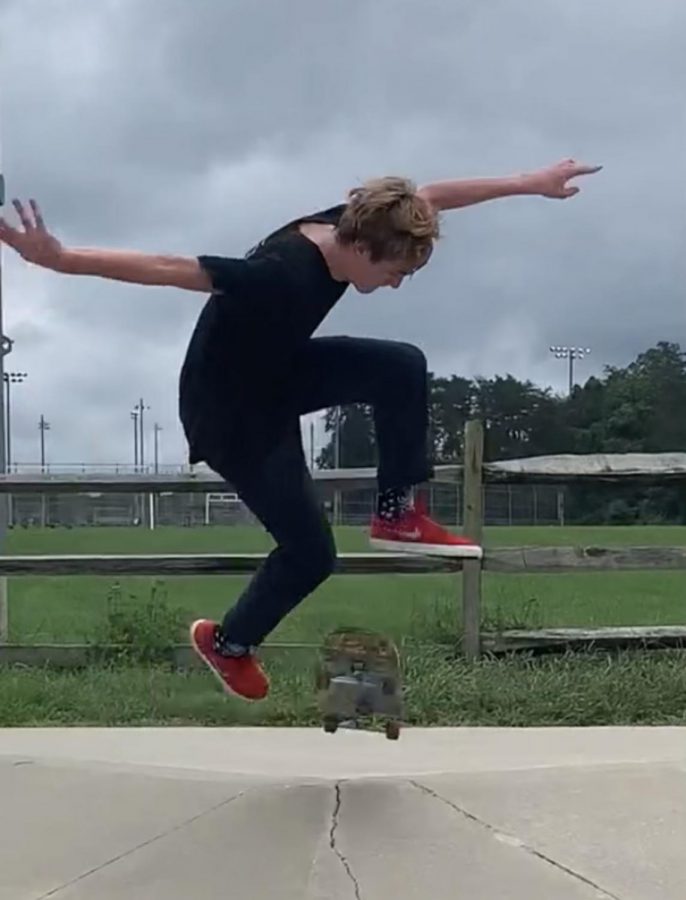 Sophomore Alex Kalhor hits a tre-flip on the sidewalk. Kalhor, Birchfield and Harake take turns recording each other preforming tricks.

Sophomore Alex Kalhor has been skating for almost two years. He originally started when he was six years old but then took a break for a while. He then had to relearn everything because skating requires a lot of muscle memory, and it had been so long that he forgot all of his skills.

“I like to go to the skate park nearest to me, or sometimes I’ll just skate on the sidewalk,” Kalhor said.

He has enjoyed skating ever since the first time he stepped onto a board. “It was one of those ‘fall-in-love-at-first-sight’ moments,” Kalhor said.

He enjoys skating with his friends the most because it allows them to perform tricks with each other and skate around wherever.

“My favorite trick is a tre-flip varial because it looks flashy,” Kalhor said. A tre-flip is when the skateboarder kicks the skateboard up and proceeds to spin it 360 degrees in the air.

What keeps Kalhor motivated is the feeling of seeing himself improve and the satisfaction he gets when he lands a move he’s been working hard on. One of the things about skating that he really enjoys is building his own board. He likes buying parts at his local skate shop and rebuilding his skateboard with newer pieces.

Sophomore Nathan Birchfield has been pulling off stunts on his skateboard during the pandemic. He has been skating for nearly two years.

“I prefer skating the most at the Chesterbrook Shopping Center with my friends,” Birchfield said.

“What really gets me motivated to go skating is that feeling of landing new tricks,” Birchfield said. Tre flip, in his opinion, is the best trick he can land.

Birchfield really enjoys having friendly skating competitions between his friends and people who are skating with or near him.

“I haven’t been in an actual competition, but I really want to be in one at some point in my skating career,” Birchfield said.

Sophomore Adam Harake has been skating for about a year and a half as well. Harake’s favorite place to skate is at one of the Wakefield strip malls and at a nearby Rite Aid.

“The coolest trick I can do is a half-cab heel, and my favorite trick to do is a heelflip,” Harake said.

Watching professionals skate on YouTube and learning new tricks are the main things that keep him motivated.

“I have never been in an organized skate competition before, but it would be really cool to be in one,” Harake said.

He enjoys skating with his friends and having friendly competitions with them. On a normal skating day, he enjoys going through parking lots, going down stairs and pulling off risky stunts.