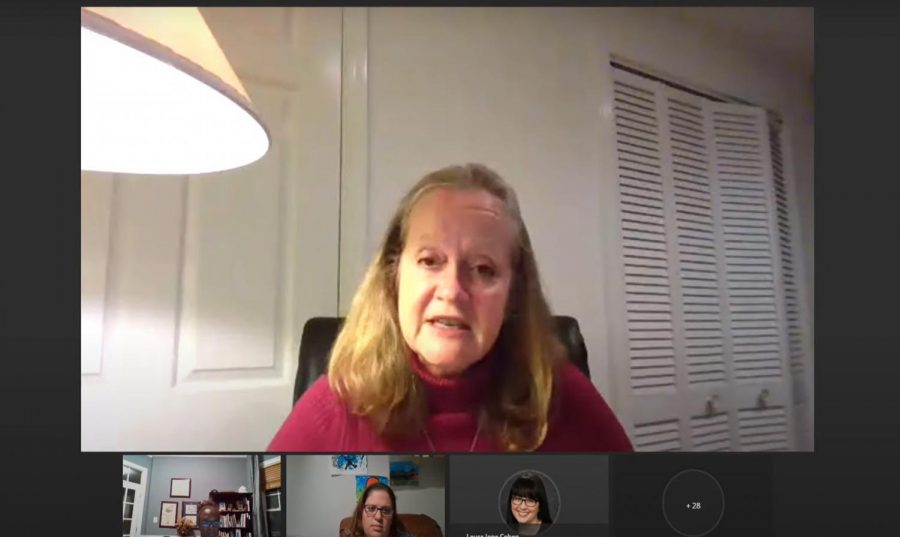 Mount Vernon District Representative Karen Corbett Sanders motions for the board to consider moving in-person learning earlier than previously planned. The motion comes at a time when political tension regarding reopening the public is high.

On Oct. 22, the FCPS school board voted to consider moving in-person learning for groups 7 and 8 earlier than previously planned.

Superintendent Scott Braband’s original schedule slated in-person learning for group 8, consisting of middle school and high school students, and students in the Davis and Pulley career centers, for Jan. 26. Group 7, made up of students in the Davis and Pulley centers with target learner profiles and elementary grades 3-6, were set to return on Jan. 4.

“We know from the World Health Organization and the CDC, our parents and our district leadership, that our children are not all excelling,” Mount Vernon District Representative Karen Corbett Sanders said in her motion on considering to return to school earlier than planned. “In [a virtual] environment, we have increased calls for help, anxiety, depression, and grades dropping.”

The motion passed 7 to 3, but does not guarantee a change in return to school dates for groups 7 and 8. It specifically called on the superintendent to provide suggestions but did not make any changes to the official dates previously determined by the county.

“Please come back to [the school board] on Nov. 12, Dr. Braband, with recommendations that address the concerns [of] bringing more students into our buildings earlier,” Sanders said as part of her motion.

The notably divided presidential election has most likely played a role in the board’s decision, as Donald Trump and Joe Biden take opposite stances on reopening the public. Community members localized the candidates’ opinions and formed movements like OpenFCPS, which caused reopening schools to become increasingly partisan in the county.

“I think the pressure on the board is coming from the [community],” English teacher Anna Caponetti said. “School board members are elected…so of course there’s a bit of conflict between making the right decision versus the decision which appeases those who are in a position to vote for your future.”

Caponetti notes that OpenFCPS wants board members Laura Jane Cohen and Elaine Tholen to be removed from the position, a clear sign of external pressure that could possibly influence decisions. Cohen voted against the motion, and Tholen abstained, one of the few times she’s done so.

“Even though my colleagues kept saying [that it was just a plan], I felt like the way it was worded didn’t leave enough room for Dr. Braband to come back and say that [high school students should return with a full schedule at the same time previously determined],” Dranesville District school board representative Elaine Tholen said.

Tholen and other board members found that representing their districts became more complicated as the general consensus fractured.

“When I open my email…the first [message] is something like, ‘Thank you for not opening schools right now, we’re with my grandfather, I’m a teacher, I don’t want to endanger his health by going in,’” Tholen said. “The next email I open is somebody that says, ‘My child is struggling, this is ridiculous, I have to go back to work, you need to open schools five days a week.’”

Some students and staff are apprehensive about FCPS’s preparedness for in-person learning. Numerous efforts have not gone smoothly—including the school district’s COVID-19 case reporting, which promises to update the community weekly on the number of students, staff, and visitors who contract the virus. As of Oct. 29, the most recent data on their website was 10 days old.

“When I look at how substandard and ill-timed the data is, it leads me to two different possibilities,” Caponetti said. “One is that they’re just being sloppy in accumulating and communicating the data, another one is it’s intentional…if the data show[s] that we’re not meeting CDC or WHO criteria for opening schools, then they can’t open.”

In the meantime, students and staff will have to wait for a further verdict on when and how in-person learning will continue.

“I’m more anxious,” Caponetti said. “[When] you have…maybe a dozen kids in the building total to pilot [in-person learning], and you have additional help, that is not realistic for what it’s going to look like for our group of general education, K-12 students.”