The Trial of the Chicago 7 review

Netflix’s new blockbuster is the perfect film for 2020 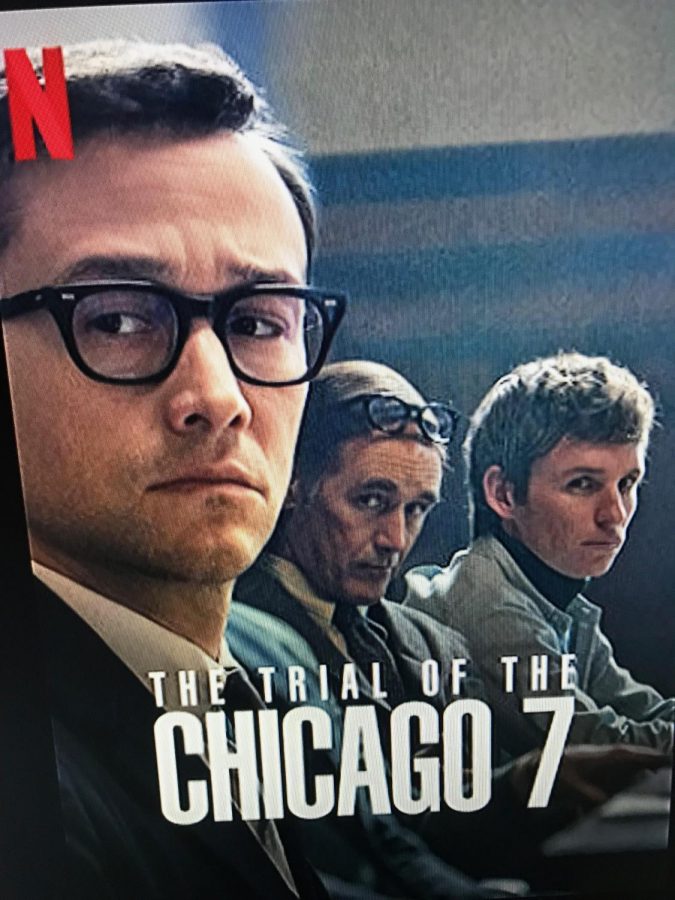 With ever so prevalent themes, Aaron Sorkin’s compelling dialogue, and outstanding acting, The Trial of the Chicago 7 is easily one of the best films of 2020.
The movie takes place in the 1960s, and recounts the protests over the Vietnam War near the Democratic National Convention and the subsequent trial that followed. The case, where several activists were charged with inciting violence, covered a violent affair in which Chicago police used excessive force and injured peaceful protestors. It was a trial where the defendants were decided to have been guilty by the judge, jury, and anyone with authority in the United States, before the trial had even begun. The film shows examples of police brutality, judicial misconduct, and an all around corrupt and flawed system. Sound familiar?
Of course, the movie’s important themes would be completely redundant and unimpactful if it hadn’t been for the articulate dialogue. It perfectly balances humor and seriousness, especially considering the severity of the plot. It almost seems satirical because of how corrupt the trial and judge were, and Sorkin perfectly illustrates that in his writing and directing. To be fair, though, it wasn’t too difficult considering how nuanced, complex, and entertaining each of the characters were in real life.
The final piece that made The Trial of the Chicago 7 such a remarkable movie was the acting. With an all-star cast led by Eddie Redmayne and Joseph Gordon-Levitt, the film shouldn’t have had anything less than phenomenal acting. However, it was truly Sacha Baron Cohen and Yahya Abdul-Mateen II who stole the show. Baron Cohen absolutely carried the comedic part of this movie. He shone through and unexpectedly added depth to every scene that required it, too. Abdul-Mateen II’s performance, on the other hand, could not be described as anything less than chilling. His acting, while emphasized to be separate from the rest of the cast, was really what made this movie worth talking about.
The Trial of the Chicago 7 is based on a true story and can be streamed on Netflix. While it has a bit of a cheesy ending and some disturbingly honest scenes, it is definitely a must watch.