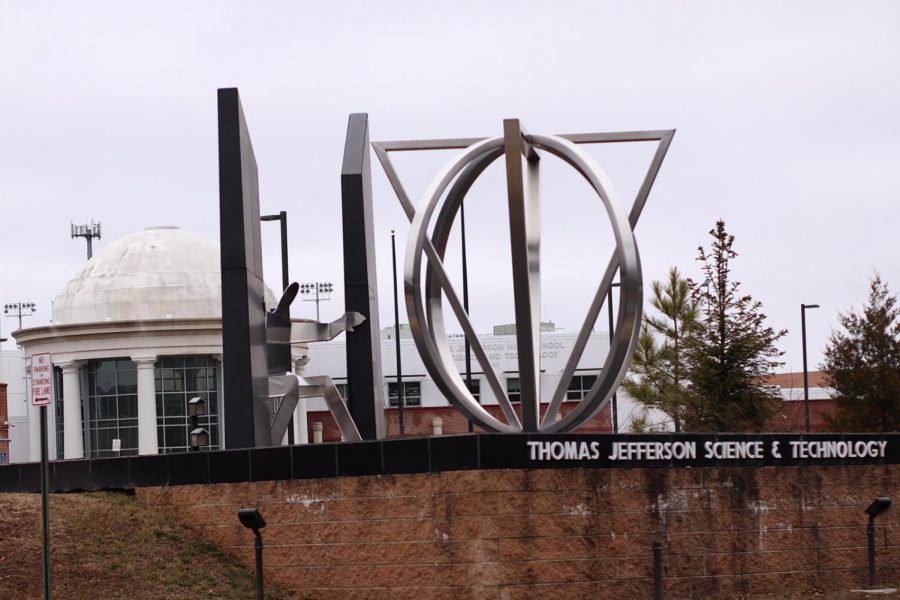 Thomas Jefferson High School for Science and Technology is making changes to its admissions process.

To increase diversity in the top-rated public high school in the country, FCPS introduced a merit lottery application system for TJ’s 2021 admission cycle. Located in Alexandria, Thomas Jefferson High School for Science and Technology (TJ) admits around 500 top students in the Northern Virginia area each year.

The Fairfax County School Board approved the elimination of standardized testing and the $100 application fee in the admissions process. The county is currently deciding between a full merit lottery system, a hybrid merit lottery and a holistic review. 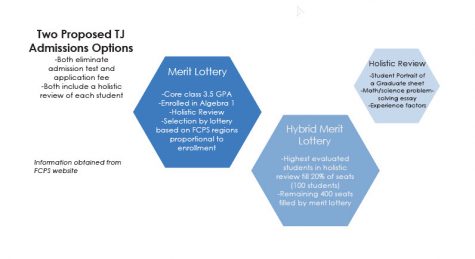 “I believe our country—in the middle of the pandemic and after the murder of George Floyd—has reached a moment where we have to with a fresh perspective to relook at equity in everything we do. We’ve had an over 25-year conversation about [improving] TJ admissions,” FCPS Superintendent Scott Brabrand said in a town hall about TJ’s admissions process on Oct. 7. “I do believe it’s time to do something other than the status quo.”

As a response to the Black Lives Matter Movement and increasing awareness of social equity issues, the Virginia Department of Education required a plan from all 18 governor’s schools, including TJ, to raise diversity. Governor’s schools are magnet high schools that take in top academic performers from a certain area through a selective admission process.

The intention of the proposed plans is to make the admission process more inclusive—bringing in students from all segments of the FCPS community.

“The current TJ admissions process has historically resulted in disproportionate demographics that do not represent the economic, racial and special needs percentages found in FCPS and throughout the Northern Virginia jurisdictions TJ serves,” TJ Principal Ann Bonitatibus said in an interview with The Highlander. “I am hopeful that a process that bolsters STEM experiences in earlier grades, removes financial hurdles for families and takes a more holistic view of students would encourage more students of all backgrounds to apply and be accepted to TJ.”

The lottery would select students based on the student population in regions of FCPS to benefit students from underrepresented middle schools. Currently, Rachel Carson, Longfellow and Rocky Run Middle Schools serve as the top three “feeder” middle schools for TJ. Students from those three schools make up nearly half of the TJ class.

The plan sparked controversy with the TJ PTSA and other groups, who began protesting against the proposed changes. TJ parent and activist Asra Nomani published an op-ed in The Washington Post, citing this as an “anti-Asian” movement.

“What Fairfax County Public Schools have decided in this approach is that Asian students are not a valued minority,” Nomani said in an interview with The Highlander. “So what you have is a whitewashing of students in their diversity. As a parent, that is what really angered me when I started hearing that kind of rhetoric.”

TJ consists of over 70% Asian students, compared to the 20% county average. According to Nomani many parents of TJ students, much like herself, are first or second generation immigrants, and the idea of the American Dreams led them to believe that hard work and merit can ultimately lead to success.

“It’s teaching our students…that hard work is not as important and that luck is more important than hard work,” said Himanshu Verma, a data scientist and TJ parent who emigrated from India.

“They just disparage them as having literally bought their way [into TJ]. Shaming is often used as a weapon in silencing people, and what I’ve noticed is that there is a rhetoric of shaming our students and our families,” Nomani said

Nomani said she believes diversifying TJ is important but that FCPS needs to actively encourage minority students to apply to TJ.

Racial stereotypes have caused misrepresentation for Black and Hispanic students in the applicant pool. Senior Didi Elsyad, a Sudannese immigrant and one of the few Black students at TJ, was once discouraged from applying.

“In seventh grade, my history teacher overheard me talking about TJ and she was like, ‘Why are you talking about TJ? You know that school is only for smart kids, right?’ and I was like, ‘You don’t know me,’” Elsyad said. “It’s not that we’re not motivated, it’s just that we’re constantly being shoved down. I think it’s unfair to ask the students to get up every single time when they are shut down.”

Encouraging more diverse students to apply to TJ is just one aspect of the issue. The lottery aims to increase equity in enrollment from the applicant pool. Statistics from TJ’s admissions portfolio for the Class of 2024 shows that 6% of applicants are Black, but they only make up 1% of the semifinalists, students who pass the admission test.

“When I got the acceptance email I thought, ‘If I go to the school, I am going to be one of five or six Black people in my whole entire grade,” Elsyad said. “‘How is that going to make me feel? What are other people going to say to me? Am I going to experience racism? Am I going to have anyone to turn to when I do experience that racism?’ and the answer, quite honestly, in most times is no.”

Elsyad is the co-leader of the mentorship and outreach team in the TJ Alumni Action Group (TJAAG), which includes TJ students and graduates who advocate for more diversity. The organization is in support of the lottery system.

“We want to help the pipeline reach elementary school and middle school kids so they feel more empowered to apply to TJ,” Elsyad said. “There is a cultural inclusivity group that [tries to] change the toxic culture—again, encouraging people to be more thoughtful and less ignorant.”

Coalition for TJ shares TJAAG’s goal of increasing diversity but opposes the lottery system. Both groups recommend the sponsorship of more STEM-related activities for underrepresented populations and have held rallies to advocate for their interests.

“Out of around 350 students who were selected in Fairfax County from the year 2022, only 22 were outside the AAP. We can do the math, so the probability of getting selected as a non-AAP student is very, very low,” said Verma, who analyzed the admission statistics.

TJ’s lack of diversity is only the surface of the educational inequity that is deeply rooted in FCPS, according to Brabrand. They are looking to improve the AAP.

In first and second grade, students take the NNAT and CogAT test, which are designed to measure the students’ potentials. Those tests determine student admission into the AAP, where they receive an advanced curriculum from third to eighth grade.

“A vision of separating kids at such a young age and telling them, ‘OK, this group is smart, this group isn’t’—that’s going to shatter your self-confidence, and you’re developing that self-confidence at such a young age,” Elsyad said. “If you have to spend third through sixth grade being told constantly, ‘I’m in the dumb class, all the smart kids are in this other class,’ what happens is that [in middle school] they don’t have the confidence to really step up [to take honors classes] and apply to TJ.”

In certain elementary schools in FCPS, sixth grade students in general education classes are not allowed to take the IOWA Test, which could place them into Algebra I in seventh grade and therefore prevent them from being admitted to TJ and from taking advanced math in high school. 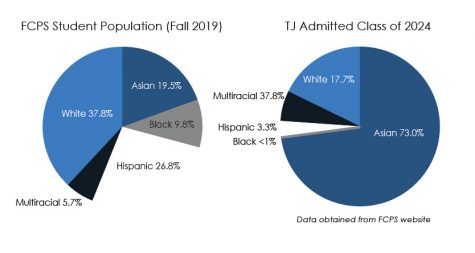 “In Virginia, some of the AAP program was actually [established] shortly after the schools went through periods of required integration,” Fairfax County School Board member-at-large Abrar Omeish said. “Elected officials here decided they were going to resist it and find new ways without racially charged language to discriminate. And the AAP was one of the things that came out of that.”

Some parents recommend the county to address the inequity surrounding STEM education across different high schools.

TJ’s principal is confident about the outcome of the proposed plan.

“I am hopeful [about the lottery],” Ann Bonitatibus said. “A process that bolsters STEM experiences in earlier grades, removes financial hurdles for families and takes a more holistic view of students would encourage more students of all backgrounds to apply and be accepted to TJ.”