FCPS plans to bring all students back by Jan. 26 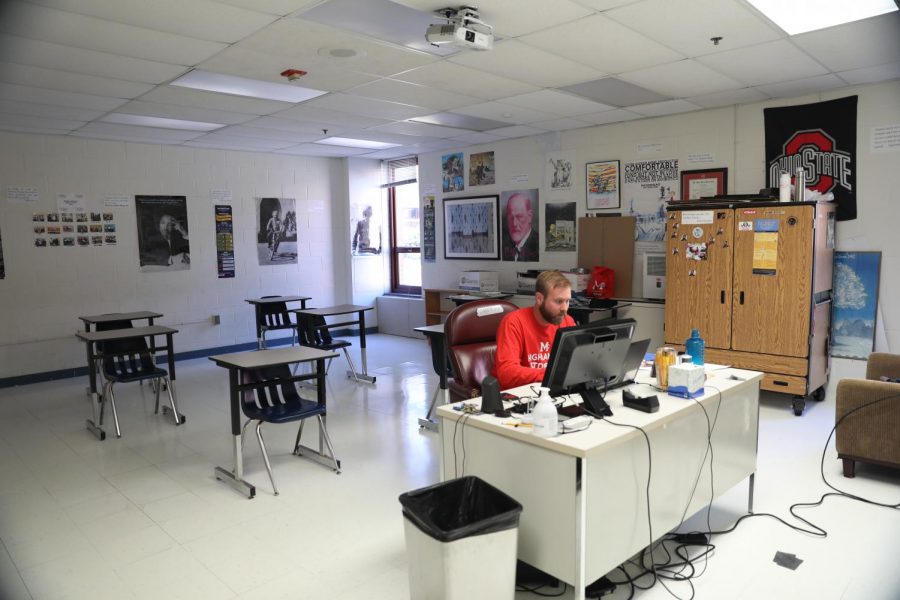 Social studies teacher Joseph Dwyer instructs AP Psychology in an empty classroom at McLean. He chooses to teach at school despite virtual learning.

FCPS plans to bring all students back by Jan. 26 in staggered groups. In mid-October, selected students began the first wave of in-person instruction, and additional groups of students will be set to return every two weeks. According to the current plan, high school students are scheduled to go back beginning in February.

Starting on Oct. 19, about 30 special education students and 20 teachers from McLean returned to school four days a week. To ensure their safety, all students and teachers are required to wear masks. The McLean staff has equipped classrooms with hand sanitizer and students will be able to clean their desks with wipes after class.

“The special needs kids will be using the red hallway,” Principal Ellen Reilly said. “[Students and teachers will] be using rooms down that art hallway where the driver’s education classrooms were and part of the silver hallway. Everybody will be pretty well spaced out.”

The next few stages of the back-to-school plan include English language learners and newcomers. Certain career and technical education students, who are mostly in academy classes, will also be returning. Then, FCPS will target students by grades, starting from pre-K and kindergarten in November.

Dranesville District school board representative Elaine Tholen recommended that the school board prioritize returning students in transition grades, such as seventh, ninth and 12th grade.

“We’re about to have [seniors] graduate from FCPS, and we understand the [difficulty of the] college application process and finishing up your diploma. [It’s hard] to help seniors virtually with those transitions,” Tholen said. “Seventh graders just left their elementary school, and now they’re going into middle school. Ninth graders are in the same boat. They don’t really know how their school works yet.”

FCPS has taken measures to protect students and faculty as they come back. Schools have built plexiglass shields in offices, health rooms and some special education locations.

“A lot of our air conditioning systems have all been reviewed to make sure that they’re working properly and that we’ve got the highest grade filters possible to try to mitigate any virus,” Tholen said.

In early July, FCPS presented students and staff with the option to choose between a  two-day in-person model or an all-virtual learning commitment for the year. In the survey, McLean ranked second highest in the student participation rate—more than 70% of students chose in-person learning.

Due to FCPS’s decision to go virtual, about 100 students did not return to McLean for Fall 2020, leaving McLean with a returning number of about 2,300 students as opposed to the predicted 2,400 students. According to Reilly, this number is uniform throughout the county public schools.

“Parents wanted their kids to go to school, and private schools are allowing at least two days a week in person, so a lot of families chose to go do that,” Reilly said.

Reilly and Tholen acknowledged the uncertainties presented with the current back to school plan, but both of them assured that if students were allowed to go back, the school would move forward with the proposed hybrid model of instruction.

“We’re spending quite a bit of money on installing cameras in our classrooms. We will have the camera on in the classroom so that you might have a composition of kids that are there in person and kids that are watching it online,” Tholen said. “You might have a teacher who is virtual, and you’re sitting at McLean High School on your laptop for that particular class.

Teachers, however, have more concerns about returning to school. About 55% of McLean teachers said they were willing to teach in-person, according to the July survey. Teachers who said they would prefer to do virtual learning all year cited reasons such as childcare issues or personal and family health problems that would place them at high risk for COVID-19.

During the school board meeting on Oct. 15, parents and teachers voiced mixed opinions about returning to school. They expressed concerns about security issues that come with cameras in classrooms, struggles in online learning, hopes for bringing students back earlier and worries about teachers’ health and safety back at school.

English teacher Anna Caponetti, as a single parent of a child with autism, said she was concerned about the selected groups of students returning to school in the gradual back-to-school plan.

“I don’t think it makes sense to start now, right at the beginning of the cold and flu season,” Caponetti said. “I think that there’s some political expediency in having students return to school now in the court of public opinion. I think that that’s, unfortunately, a heavy factor that’s implementing this return before it’s time.”

Some students see the benefit of the gradual back-to-school plan, especially for students with learning disabilities and children in lower grade levels.

“[COVID spread] is obviously going to happen. I think it’s inevitable based on the amount of kids in the county,” junior Veronica Betancourt said. “But  in the end, [going back to school] is still going to be worth it because it can be incredibly damaging to put education on hold, especially for younger kids, for over a year.”

According to Caponetti, if schools were to go back, the hybrid back to school model could also potentially increase COVID-19’s community transmission. Because teachers will still meet all of their students, they will be more like to be exposed to the virus and could easily spread it to their students. Not all adults have been following the proper health precautions, and it will be even harder to enforce it among teenagers.

“Half of the time students are not learning synchronously at home, they’re going to be socializing with their friends. I think it actually opens up more potential for students to practice bad behaviors that are putting us all at risk,” Caponetti said. “It’s like Russian roulette—people don’t know if they are at risk of fatal consequences because nobody can know that with any degree of certainty.”

The fear that students aren’t the most trustworthy when it comes to following health guidelines is a prevalent theory.

“If I had a choice, I would not go back to school right now because it is so dangerous,” senior Ari Ablyazova said. “I do not trust that the students would want to wear masks at all times and social distance because the halls are small and so are the classrooms.”

Although online learning may not be ideal compared to in-person school, teachers have adapted their curriculum to fit the needs and the constraints of the virtual world.

“I can record my revision conferences with students and send them the link, and then they can go back and listen to it,” Caponetti said. “If they miss class, they can listen to everything that has happened. I think I have more time now to meet with students in a way that’s conducive to their growth, so that it’s not a total loss in this format—it’s not unilaterally inferior.”

With the increase of “Open FCPS” yard signs appearing across the county, the difference of opinion on the return to school plan continues, even as the transition is beginning to be implemented.

“I hope everyone is trying their best to stay safe,” Ablyazova said. “I hope that people are trying to make the best out of this situation but not at the expense of others.”