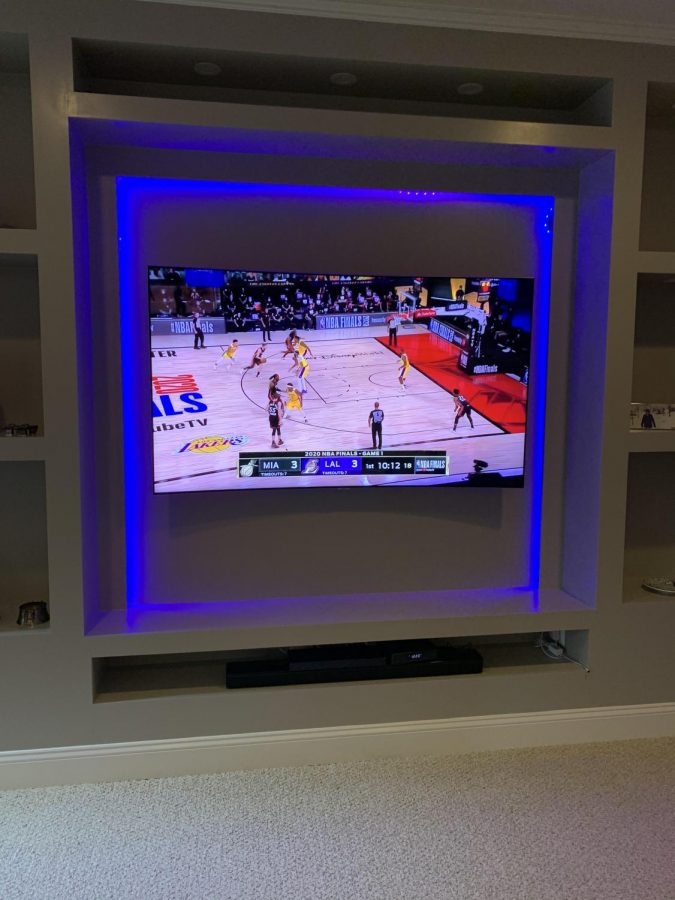 Game 1 of the NBA Finals kicks off. The Lakers went on to beat the Heat this game 116-98 to give them a series lead.

On Sunday, Oct. 11, the Los Angeles Lakers beat the Miami Heat 106 to 93 and won the NBA Finals 4-2. Lebron James and Anthony Davis were able to beat a hard team with the Heat having Jimmy Butler, Bam Adebayo, and Goran Dragíc.

Zarkani is a Lakers fan primarily because of Lebron James. He is his favorite player and believed that with Anthony Davis and other stars on the team, they were likely to win the championship this year.

“I knew that the Lakers would make it to the finals, but not against the Heat,” Zarkani said.

“It was kind of weird seeing them in the finals knowing that they weren’t the strongest team in the NBA,” Zarkani said. “But if they beat the Bucks and Celtics, I knew they were a good team, just not good enough to beat the Lakers.”

Even after the Lakers won, Heat fans at McLean were not mad that their team lost, rather they were proud of them for being able to make it to the finals.

“I was shocked we made it so far and loved the level of effort and talent we put out each night,” junior Ben Kelly said.

The Heat were able to pull out 2 wins to give a challenge to the Lakers. And with their top scorer Goran Dragíc out, Jimmy Butler had to play at a level of a superstar.

“With how awful we played in games 1 and 2, I don’t think anyone but Jimmy can deserve to win,” Kelly said.

Jimmy Butler was putting numbers up to give the Heat pressure on the Lakers. His stats in the finals were incredible, averaging 26.2 PTS, 9.8 AST, and 8.3 REB with a field goal percentage of 54.6%.

“Lebron and Anthony Davis were just too good, and we didn’t have an answer,” Kelly said. “While I don’t like the Lakers, you got to respect their effort and the win.”

This title for the Lakers gave players like Lebron, Anthony Davis, Rajon Rondo, Dwight Howard, and more a championship ring to add to their trophies.