Vice presidential candidates meet up for first and only debate 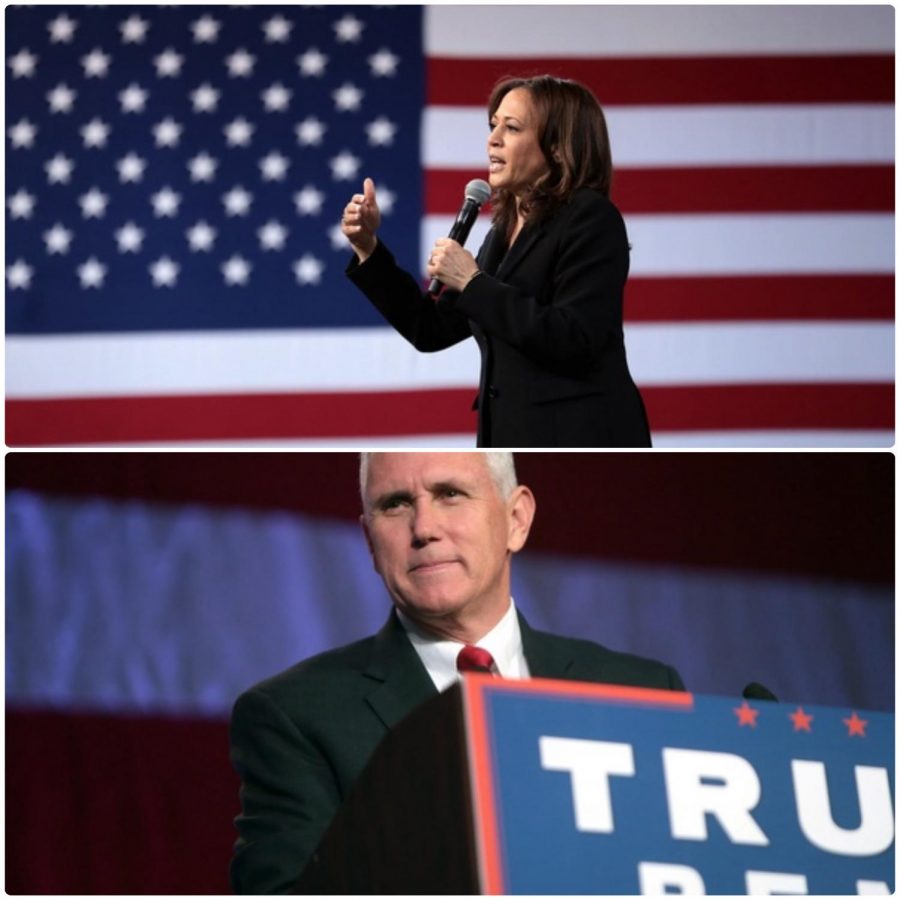 VP Face Off — Kamala Harris and Mike Pence both share their viewpoints prior to the debate. (images obtained via CreativeCommons)

On Wednesday, Oct. 7, Vice President Mike Pence and Senator Kamala Harris arrived in Salt Lake City for the only vice presidential debate, with plexiglass between them of course. Viewers were hoping to see some form of civility following the intense shouting match that was last week’s presidential debate. Luckily, this debate was much more civil, though that’s not saying much.

The night started out with a discussion of Trump’s dealing with the coronavirus. Off the bat, Harris shared her disapproval of the Trump administration’s pandemic related actions.

“Well, the American people have witnessed what is the greatest failure of any presidential administration in the history of our country,” Harris said.

However, Pence was quick to defend Trump, and claimed that there was no way to avoid the death of over 200,000 Americans.

“I want the American people to know that from the very first day, President Donald Trump has put the health of America first,” Pence said.

Harris disagreed, arguing that Trump and Pence were lying to the public by withholding valuable information, and stating that it shows that the administration does not truly respect the American people.

The discussion of the coronavirus came to a close after Pence was questioned about the Rose Garden event that caused several new cases, as well as Harris stating she would not try a vaccine unless Dr. Anthony Fauci or any other health professional recommended it.

The conversation then shifted to the topic of the economy, which has been of peak interest following the COVID-19 pandemic causing many to lose their jobs. The potential Vice Presidents had very differing views on how Trump has dealt with the economy.

“When President Trump and I took office, America had gone through the slowest economic recovery since the Great Depression. It was when Joe Biden was vice president, they tried to tax and spend, and regulate, and bail our way back to a growing economy,” Pence said. “President Trump cut taxes across the board. Despite what Senator Harris says, the average American family of four had $2,000 in savings in taxes.”

The topic then transitioned into climate change, with Pence attacking the Biden campaign for supporting the Green New Deal, which Harris denied. She then brought up that the Trump campaign had removed the words “climate change” and “science” from their website.

Pence stated during this portion of the debate that “the climate is changing” and proceeded to state that Trump is creating more jobs, while Biden was responsible for many going away under the Obama administration. Harris quickly objected to this statement.

“Joe Biden is responsible for saving America’s auto industry and you voted against it. So let’s set the record straight,” Harris said.

The moderator, Susan Page, then asked the candidates about their thoughts on the United States’ relationship with Russia, which transitioned into a more broad discussion of foreign relations with many other countries, namely Iran.

Pence then went on to mention how Trump had taken out Qassem Soleimani when he was “traveling to Baghdad to do harm to Americans.” Harris responded by mentioning Trump’s lack of action against Russia when they have threatened the United States.

“Donald Trump had talked at least six times to Vladimir Putin and never brought up the subject [of bounties placed on American soldiers],” Harris said.

Page then shifted the conversation to the discussion of the new Supreme Court nominee, Amy Coney Barrett, and her stance on abortion. Page asked Pence and Harris what abortion laws they would like to be in place in their home states of Indiana and California, respectively.

Instead of properly answering the question, Pence went back and mentioned again how quickly Trump reacted to Qassem Soleimani and stated that Biden had been opposed to the raid against Osama bin Laden.

He then went on to briefly discuss how qualified Barrett is and said he hoped she receives a more respectful confirmation process than Brett Kavanaugh did back in 2018. Pence only briefly brought up later when answering a different question that he is pro-life.

However, Pence was not the only one avoiding questions. When asked about the issue of packing the Supreme Court, Harris veered away from the topic. She instead focused on Trump’s lack of representation in the courts.

“Do you know that of the 50 people who President Trump appointed to the court of appeals for lifetime appointments, not one is black? This is what they’ve been doing. You want to talk about packing a court? Let’s have that discussion,” Harris said.

So, was the night a total disaster? Certainly not, the candidates remained mostly civil, regardless of Harris’ facial expressions and consistently “bugging” Pence over Trump’s taxes. However, both candidates seemingly dodged questions they weren’t comfortable with and neither made a large statement.