McLean students pay their respects at the Supreme Court memorial 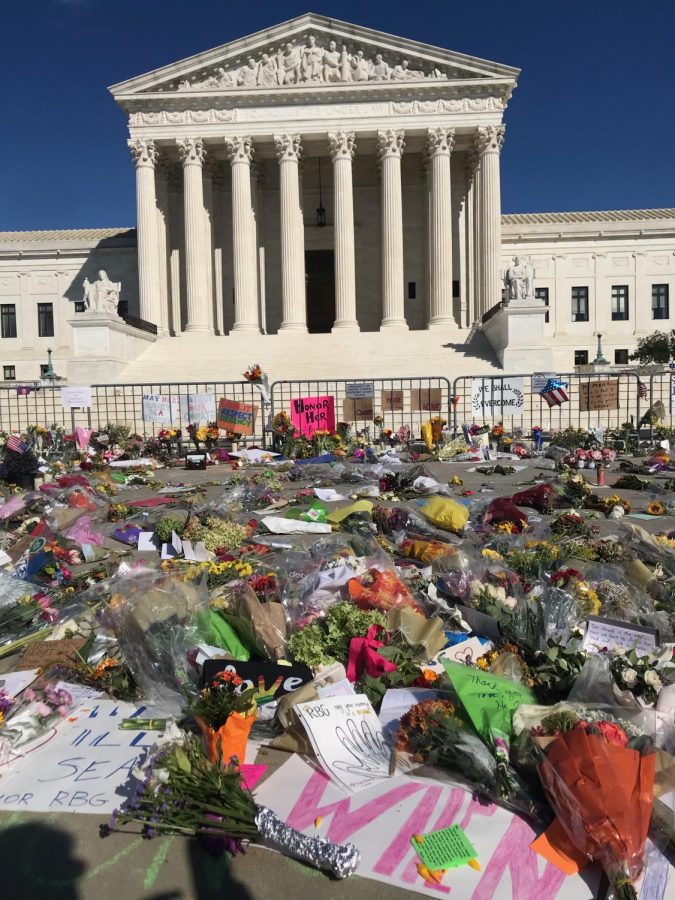 People place flowers and cards in front of the Supreme Court to show their support for the late Justice Ruth Bader Ginsburg. The Supreme Court was closed off due to COVID-19, so people left the gifts around the gate.

Hundreds of colorful bouquets and handwritten cards and posters adorn the outside of the Supreme Court, celebrating the life of Supreme Court Justice Ruth Bader Ginsburg. Surrounding the beautiful memorial, people crowd around the court to pay their final respects to Ginsburg, who passed away on Sept.18 due to metastatic pancreatic cancer.

The news of Ginsburg’s death was surprising and sudden.

“I obviously knew that she was elderly and sick, but it was such a shock to see the news saying she died. I was just really sad and scared about the future of the Supreme Court,” senior Skye Sunderhauf said.

This past week, in honor of Ginsburg, people from all over the country have displayed support and respect for the late justice. The justice’s coffin was placed in front of the Supreme Court Wednesday and Thursday for public viewing. Due to the close proximity of Washington D.C. to the McLean area, many McLean students visited the memorial.

“It was very humbling, and I felt lucky to live near D.C., so I could see her memorial,” said senior Amanda Pardo, who visited the Supreme Court on Wednesday.

Despite the ongoing coronavirus pandemic, the memorial attracted large numbers of people.

“It was very crowded around the memorial,” Pardo said. “People were social distancing when possible, but it was hard.”

However, people were still cautious about public health.

“It was pretty crowded, but everyone was wearing masks and [were] pretty spread out,” Sunderhauf said.

The grief and sadness experienced by supporters of Ginsburg translated to a somber, yet peaceful atmosphere at the memorial.

“Everyone was pretty quiet; it felt like everyone understood that it was a moment to pay respects and appreciate [Ginsburg’s] life,” Pardo said.

As a show of respect, people left gifts and expressions of gratitude around the Supreme Court.

“There were so many flowers, signs, and chalk decorations, and it revealed how loved and admired RBG was. I think most people were thinking about how to continue her legacy,” Sunderhauf said. “That’s why I brought flowers for her.”

Because Ginsburg was Jewish, people also left gifts relating to her religious culture.

“My mom and I brought rocks [to the memorial] because it is a Jewish custom to lay rocks for someone when they die,” Pardo said.

Despite her tragic death, Ginsburg’s legacy will always be remembered, especially by the new generation of teen activists she inspired.

“It was a really amazing experience to be unified with so many people and remember such an amazing woman,” Sunderhauf said. “Without her, women wouldn’t have a variety of the things we take for granted.” 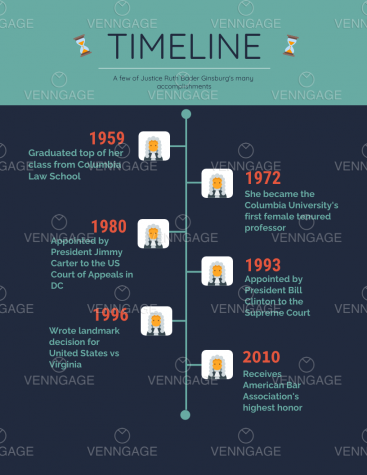 Timeline of RBG’s law career (Timeline made by Michelle Cheng)