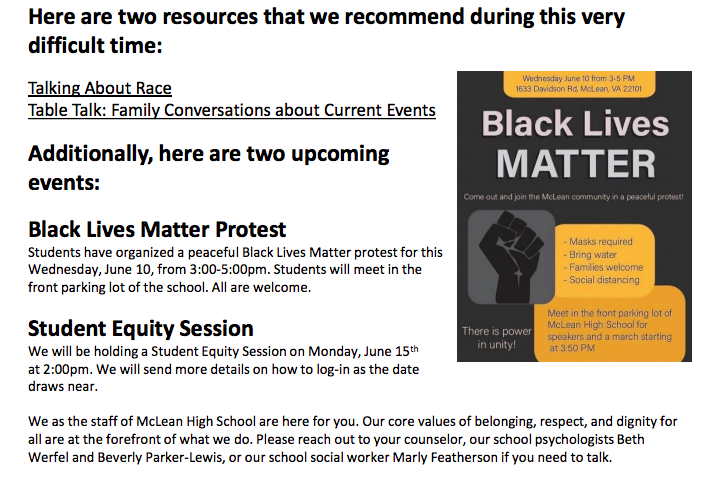 Black Lives Matter- McLean students have organized a protest fin support of the Black Lives Matter movement on June 10. They spread the word through the school's newsletter (screenshot taken by Cordelia Lawton).

For two weeks Black Lives Matter protests have flooded the streets of all 50 states calling for change. Protests have taken place in Falls Church and McLean High School students have organized a protest on June 10 at school from 3-5:30 p.m.

These protests were sparked by a Minneapolis police officer’s killing of George Floyd. Video footage of the incident shows four police officers restraining Floyd. One officer has his knee on Floyd’s neck and viewers can hear him say that he cannot breathe. According to National Public Radio (NPR), an autopsy revealed that the pressure on his neck did cause his death. All four police officers were fired and have been charged.

This is just the tip of the iceberg of what they are protesting. Black citizens and their allies are protesting what they see as systemic racism that takes shape not just in police brutality, but in the form of poorer schools, neighborhoods and voter suppression in many states. The Washington Post reports that in 1968 the median wealth for black middle-class households was $6,674 compared to $70,786 for white families. The data from 2016 (adjusted for inflation) is $13,024 for black households compared to white households, which is $149,703.

While early protests had violence involving fires, looting and destruction of cars, the majority of protesters say they want to keep demonstrations peaceful. According to CNN, all of the violence caused about 16 states to enact curfews, and some public figures wanted to call the military in to supplement the police.

CNN reported that the police have arrested members of the press even when they showed press badges and officers have used rubber bullets on protesters across many cities . NPR noted that  while officers are trained to shoot less than lethal projections/rubber bullets at the lower body, they haven’t been doing so as these devices have severely injured protesters and journalists.

“A 2017 study found that among people injured by “less than lethal” projectiles, more than 70% had severe injuries, 15% were permanently injured and less than 3% percent died,” wrote NPR. The study’s authors concluded that these projectiles “do not appear to be an appropriate means of force in crowd-control settings.” Research shows that using these weapons does not deescalate tensions during protests, but can actually lead to more violence.”

According to The Washington Post, on June 1 the President wanted to go to a nearby church so the peaceful protesters outside the White House were cleared out by tear gas and flash bangs. NPR reported that tear gas is especially harmful during a pandemic.

“These crowd-control weapons are rarely lethal, but in the middle of the coronavirus pandemic, there are growing calls for police to stop using these chemical irritants because they can damage the body in ways that can spread the coronavirus and increase the severity of COVID-19,” wrote NPR. “Deploying these corrosive, inhalable chemicals could harm people in several ways: expose more people to the virus, compromise the body’s ability to fight off the infection and even cause mild infections to become more severe illnesses.”

Some protesters are demanding that police be defunded after what they say has been a long legacy of police brutality. According to The Washington Post, Minneapolis city council members announced plans to disband the city’s police department. According to NPR, Bowser doesn’t plan to defund the police in D.C.

These protests in the U.S. have sparked a global movement, with protests taking place in cities such as Paris and London.