Houston, we have a problem (it’s you)

The Astros orchestrated their cheating here, at Minute Maid Park. The center-field wall was used to conceal the camera that attempted to steal the opposing catcher's signs.

What began as a scheme engineered by a former major league superstar has devolved into a tale of controversy, disappointment, and untrustworthiness. Welcome to the Houston Astros sign-stealing scandal – a controversy so horribly managed by the overlords of the MLB that they have proven once again that they are not fit for administration.

Houston’s cheating operation was blown up thanks to an article written by The Athletic’s Ken Rosenthal and Evan Drellich on November 12, 2019, which detailed how in 2017, the year they won the World Series over the Los Angeles Dodgers, Houston used a center-field camera to broadcast the opposing team’s catcher’s signals to a TV in Houston’s clubhouse hallway. The players in Houston’s dugout would then alert the batter at the plate if the next pitch would be a fastball or an off-speed pitch via a banging on a trashcan. Brought to light by former Astro Mike Fiers, Houston and their World Series title have become scrutinized by fans across the league, dethroning New York as the most hated team in the MLB.

The operation (devised by nine-time all-star Carlos Beltran, a veteran leader on Houston’s world championship-winning squad) and the aftermath of the scandal as a whole have not been handled correctly by Major League Baseball’s head officers, namely MLB commissioner Rob Manfred. While the one-year suspensions of Houston’s general manager Jeff Luhnow and manager A.J. Hinch were decent punishments, the fact that no players were punished is despicable. They were the beneficiaries of the cheating and yet still have not been properly dealt with.

“I didn’t think the punishment was even close to fair,” junior Gavin Meany said.

The sentence for players convicted of cheating should be, at minimum, a suspension of at least a year from the MLB and a hefty fine. The problem this holds, however, is the situation involving former Astros who have joined new teams, such as Minnesota Twin Marwin Gonzalez, who admitted and apologized for the scandal. The Twins being punished by signing a player who cheated and then got suspended for that cheating years later would be unfair, but Gonzalez not being apprehended for breaking the rules would not teach Houston the right lesson.

A stripping of Houston’s 2017 World Series trophy would be the real nail in the coffin for the Astros. If they cheated for the trophy, it no longer holds the significance of the same incredible achievement made by other champions of the past-thus, the trophy should be rescinded; the championship would not be rewarded to the Dodgers outright, however. The 2017 Major League season would be known as the “year without a champion”

Cheating in Major League Baseball is not a new concept; from the infamous Black Sox Scandal of 1919 to the steroid users of the 1990s, teams will always try and find a way to gain an unfair advantage. However, the fact that the Astros were yet another example of cheating in professional sports and only received a slap on the wrist surely speaks to the command of baseball’s heads, and the weakness of the administration when compared to other leagues. Thank you, Commissioner Manfred, for once again embarrassing and weakening the sport that you are supposed to protect to the best of your abilities. 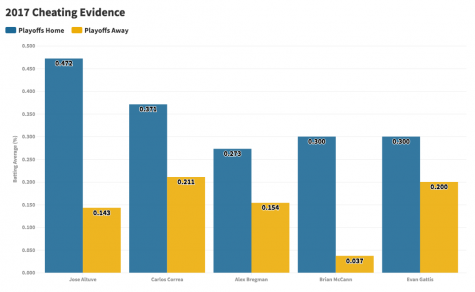