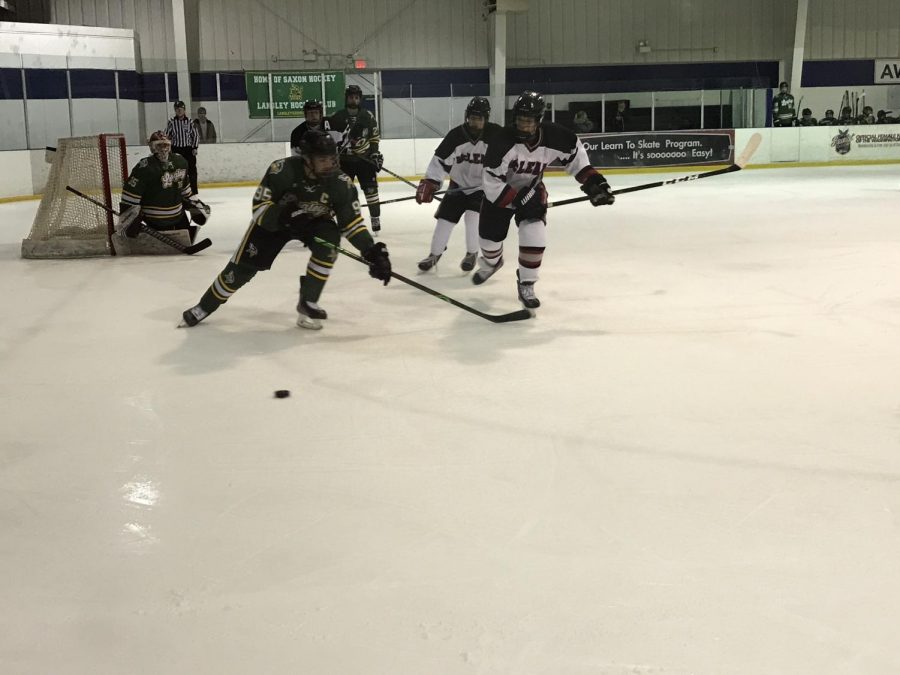 McLean started in the lead, scoring a goal in the first period of the game. The team celebrated, knowing that they had just made a great start to the game against their rivals, Langley High School.

There was a lot of pressure leading up to this game because it was also McLean’s Senior Night. Notable seniors who have been on the team for all four years, such as Jacob Paikin, were hoping to get a win.

“The seniors were somewhat nervous due to the high stakes of the game… as it was for a rivalry game and our Senior Night,” Paikin said.

Students from both schools showed up in numbers to support their team in this intense match-up. McLean Ice Hockey was anticipating a large crowd and was eager to show the audience the time they put into practice.

“We were also excited to play in front of such a large crowd of fans and see our hours of practice bear fruit in a high stakes game,” Paikin said.

With 2:07 mins left on the clock, McLean scored the first goal of the game, kick-starting an early lead for McLean.

The first period ended 1-0 McLean. Langley missing all of their 10 shots in the first period had a slow start. McLean Ice Hockey seniors were ecstatic to have an early lead over Langley’s strong defense.

“I felt really excited when McLean scored the first goal, especially because Langley is known to have an incredible defense,” Paikin said. “The goal gave me hope that our offense might be strong enough to overcome that defense and win the game.”

However, within the first two minutes of the second period, they quickly scored their first goal of the game, tying it up 1-1.

“We were a little frustrated after the goal, but we’re still optimistic that we could win the game,” Paikin said.

Tensions escalated as seniors Matthew Regan and Drew Hecker were penalized, creating a 3 on 5 penalty. This meant that McLean had to compensate for their time off the ice in order to defend against Langley’s offense.

McLean fans were crushed to see their early lead slip away as Langley was winning 2-1 five minutes into the second period.

“After the game all of us were very frustrated and angry, and the taunts of the Langley fans definitely intensified those emotions,” Paikin said.

It was a crushing loss for the McLean seniors, especially because winning the game would automatically place the team in the second round of playoffs.

However, the team will move on for this loss and is looking forward to their upcoming games this season, especially their first playoff game in two weeks.

“We all reflected on the loss through conversations in the locker room and strategizing for future games. I think all of us will evaluate what went wrong in the Langley game and try to ensure those mistakes don’t happen again.

Click here to see Langley Ice Hockey celebrate their win on the ice.