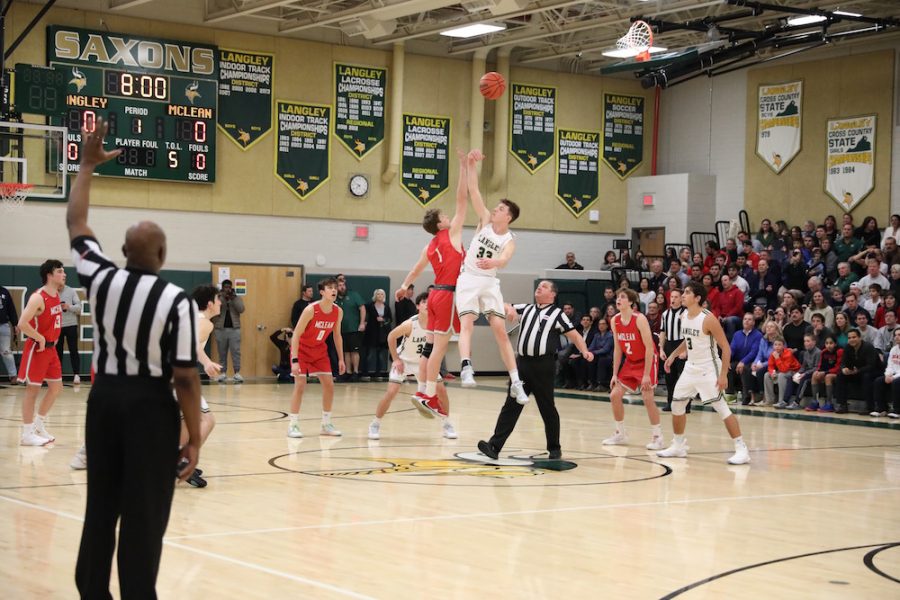 Player Aaron Bremser attempts to get control of the ball at tip-off.

Overflowing in red and black shirts, chants, and cheers, Langley High School hosted the first of two meetings between rivals McLean and Langley. Despite a tough loss, there were plenty of positives for the Highlanders.

Despite falling behind 16-3 early on, McLean rallied all the way back, tying it up in the second half, led in scoring by Randy Shephard and Aaron Bremser.

“Hopefully the boys team steps up during the rest of the season,” Leung said. “I do think they have potential, not all hope is lost.”

The atmosphere of the game is always one of the high points, with fans of both sides cheering and yelling throughout, which can affect the performance of the players.

“I like the competitiveness between McLean and Langley because it keeps these games exciting with the cheers and the anticipation,” junior Megan Leung said.

Even members of the staff help to encourage the crowd throughout the game, with Officer Davis leading the McLean crowd in a cheer during the half.

“The crowd and the hype wasn’t really a factor once the game started,” Davis said. “My favorite thing about playing against Langley is carrying on the tradition of the rivalry.”

McLean feels they can recover from this loss and expects to beat Langley in their upcoming rematch on Jan. 31.

“We just didn’t shoot enough,” Davis said. “If we run the floor and shoot we’ll beat them next time.”