Dueling it out during the school day 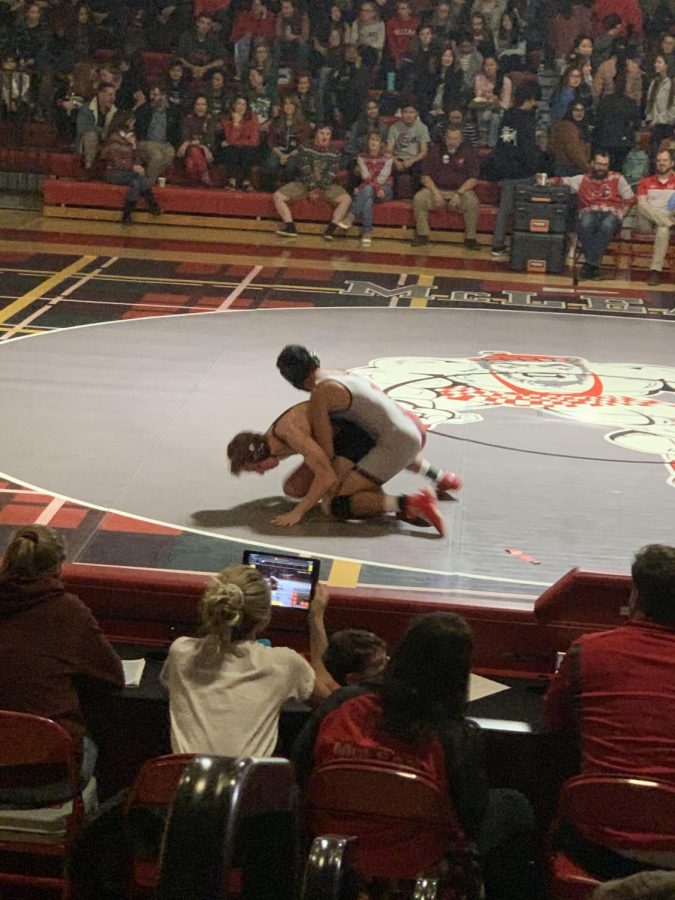 A McLean wrestler secures two points for a take down. McLean was able to score off their take downs throughout the night.

Anticipating the entrance of their Highlanders, the crowd of students erupt in cheer as the varsity wrestling team runs out of the locker room ready to compete. The day of the dual was Wednesday, Dec. 17, where students from all classes met during seventh period to witness the intense match between McLean and Mount Vernon.

“I was really excited about going into the match. I had a bunch of my friends and the football coaches watching and I just love to compete, ” said sophomore Brigham DeVore, member of the varsity wrestling team.

very exciting moment for many on the team since it was the first time they were to play in front of such a large crowd. As match started, McLean took an early lead which extended throughout the event. Several weight classes were forfeited with both teams not having wrestlers in certain weight classes. McLean won the 120, 132, 138, 170, and 220 weight classes, winning 145 by exhibition.

Having the dual held at McLean during the day exposed new faces to the sport.

“I thought it was really cool to have it during school. A lot of people don’t know what wrestling is or how it works. Having it during school gave a lot of exposure to our team and the sport as a whole,” said DeVore.

When it was all

said and done, the Highlanders were able to prevail, winning 48-33.

“I think the event was great,” said sophomore Brennan Sumida, member of the varsity wrestling team. “Running out of the locker room with my teammates and seeing the stands filled with students was super cool. I was also super proud of how we did as a team.”

The Highlanders defeat Mt Vernon 48-33 at The Dual During School!!! pic.twitter.com/mqgQVe2dMc