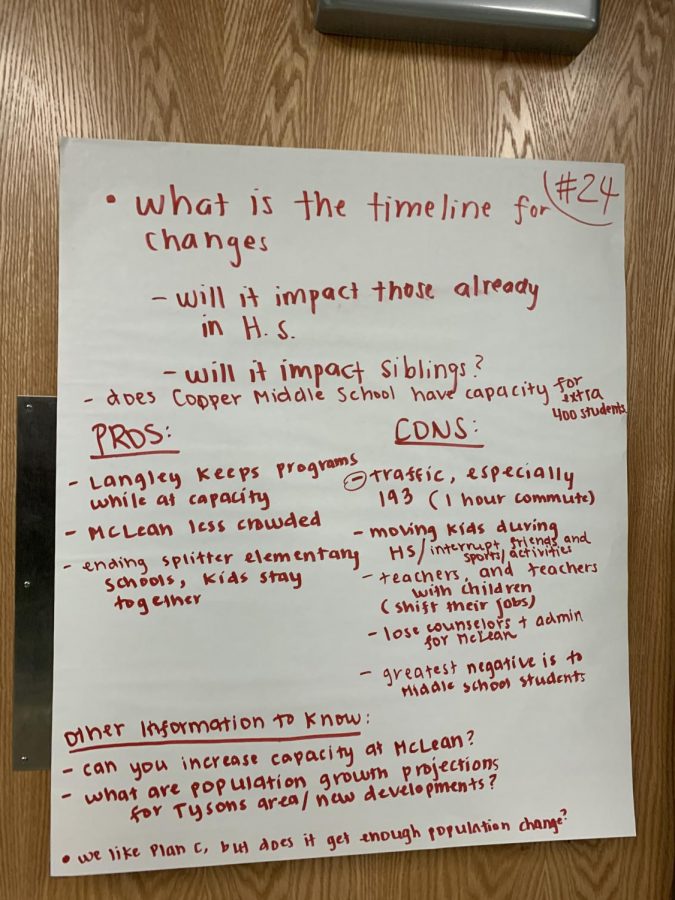 Overcrowding has been the key issue at McLean this school year. With an abundance of trailers and crowded hallways, students at McLean find it difficult to go between classes easily. To resolve this increasing issue, the Fairfax County School Board is planning on shifting school boundaries to allow for more McLean students to go to Langley.

Currently, McLean is overcapacity, with 357 more students than the building was built for, and this number will continue to increase annually.  Langley, however, is under crowded and has 1,972 students in a building designed for 2,370.

The two proposed neighborhoods to switch over to Langley are the Spring Hill and Colvin Run districts. Since they are split-feeders, meaning that their students go multiple high schools, these neighborhoods are the easiest to redistrict. As of right now, the School Board has no plans to relocate the neighborhoods located near McLean High School.

“I think that we should move both of the islands into Langley next year to alleviate as much pressure as possible,” said Sarah Swinehart, a mother who has a child currently attending Chesterbrook Elementary School.

According to FCPS procedure, the School Board hosted two community boundary scope meetings, one at Langley on Dec. 2 and one at McLean on Dec. 4. In these meetings, parents, community members, and students were able to voice their concerns about the boundaries and were able to propose their own solutions.

“I think it’s great that they’re asking for community input. It feels a little bit late, but we’re glad we’re here, and that something’s being done about [the overcrowding],” Swinehart said.

Parents raised questions about how Fairfax County plans to create a long-term solution to the problem. Many parents pointed out that Tyson’s Corner is a growing community that is playing a significant role in the increasing student body at McLean. They also addressed concerns about transportation of students that would change schools.

“I think they need to be considering building more additional space and space that’s flexible enough to accommodate as different needs arise across the community,” Swinehart said.

While there no solutions were created at these meetings, they were able to bring together the McLean community to solve an issue that is affecting students’ daily lives. In the spring, they will reconvene to address final boundary changes for the upcoming school year.