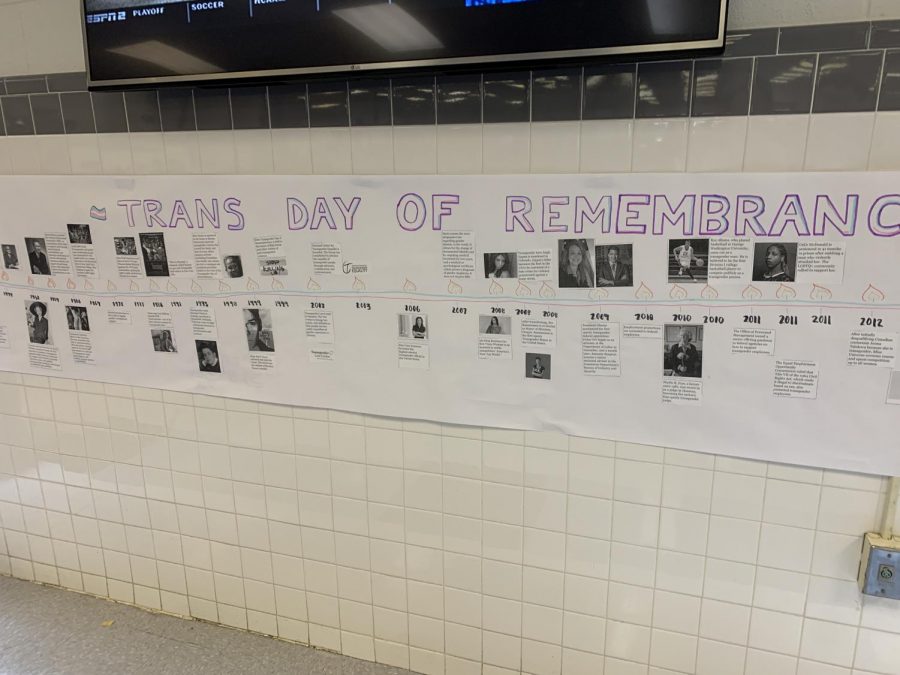 The Trans Day of Remembrance timeline hangs in a central location in the cafeteria.

As you walked into the large, bustling cafeteria today, you may have seen a large sign with colorful decorations, as well as black and white photos hanging from under the main TV. Upon closer look, this poster details a complex timeline of the history of trans people, starting from 1949 to current day. This timeline poster highlighting important events of the trans community proudly hangs in the McLean cafeteria to celebrate today’s Trans Day of Remembrance.

The Trans Day of Remembrance is important for all students at McLean to be aware about.

Discrimination against trans people in history has only recently become more talked about, especially in the media.

“Not so long ago, the trans community had almost no visibility whatsoever, politically or socially. There is a long history of murder of trans men and women that goes almost unacknowledged in this country. The rate of murder, suicide, and violence in the trans community has always been staggering, and it is finally lessening dramatically in recent years,” LeBlanc said.

However, while the GSA club’s timeline poster reveals acts of hate against trans people, it also highlights celebrates the progress that the trans community has made in the past years.

“So much has happened in the last two decades. We have trans politicians, judges, and celebrities, [and] states are making it much easier to legally transition,” LeBlanc said. “The timeline is meant to highlight the great strides that have been made in securing trans rights.”

The timeline features the social and political events most important to achieving equality and liberation for trans people.

“It starts with the first reassignment surgery in 1932 and ends with Obama mentioning trans issues during his State of the Union address in 2016, which was the first time a president even brought up trans issues publicly,” LeBlanc said.

Through the informative timeline and weekly meetings, the GSA club hopes to expand awareness about this ongoing and historical issue.

“[The timeline] will help students to maybe learn a fact or two, and visualize that this isn’t something new or trending, and that it’s about a group of people that have been fighting for their rights for quite a long time,” LeBlanc said.