Democrats gain the majority in both the VA House and the Senate on Nov. 5 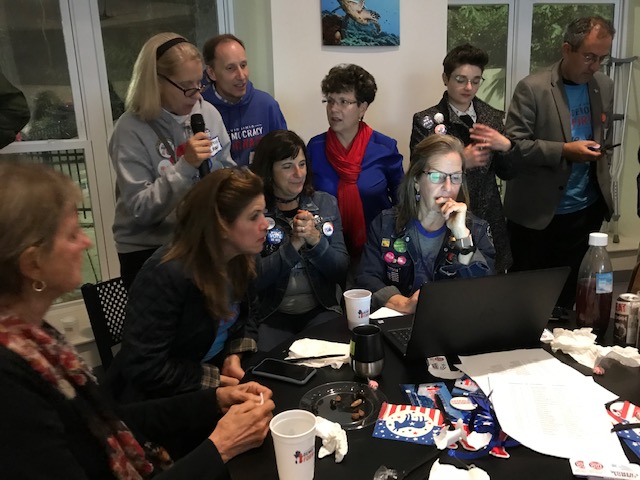 Members of the grassroots group, Virginia Democracy Forward, huddle around a computer on Nov. 5 to watch the 2019 Virginia election results. The Democrats ended up winning the majority in the VA house and senate.

Since President Trump was elected, there has been a steady increase of Democratic control across the US. In Virginia, this is the third consecutive election where they have made gains in state and national legislature. This time, two seats were turned blue in the VA Senate and five in the VA House.

Both the Virginia House and Senate were held by slight Republican majorities up until this past election. Many people, in Virginia and nationwide, are coming out to vote and voting democratic to oppose the current president’s views.

“After about thirty years, Virginia has made history when the democrats took control of both chambers of the State government,” said Lori Boerner, the founder of the grassroots group, Virginia Democracy Forward.

With the new Democratic majority, a variety of new reforms are bond to come. Among other things, Democrats have pledged to enact an agenda that had been blocked by Republicans for years, such as stricter gun laws and increased minimum wage within the state.

Also, they have promised to ratify the Equal Rights Amendment, which only needs one more state to become ratified. Virginia will be that state due to the new Democratic control of the Virginia Congress.

“The ERA isn’t just for women, it’s to equalize both men and women so that there can be no discrimination on the basis of sex… VA will make history by becoming the 38th state needed to ratify the ERA and get it passed nationally,” Boerner said.

With this victory, the possibility of Democratic domination in the future is brought closer. This is because the winners of the Nov. 5 election are in control of the redistricting process, which is an important factor when it comes to getting votes, especially in the 2020 election.

“The change from red to blue in Virginia represents a bigger change nationally of the views of the current U.S. citizens and their democratic beliefs,” Boerner said.