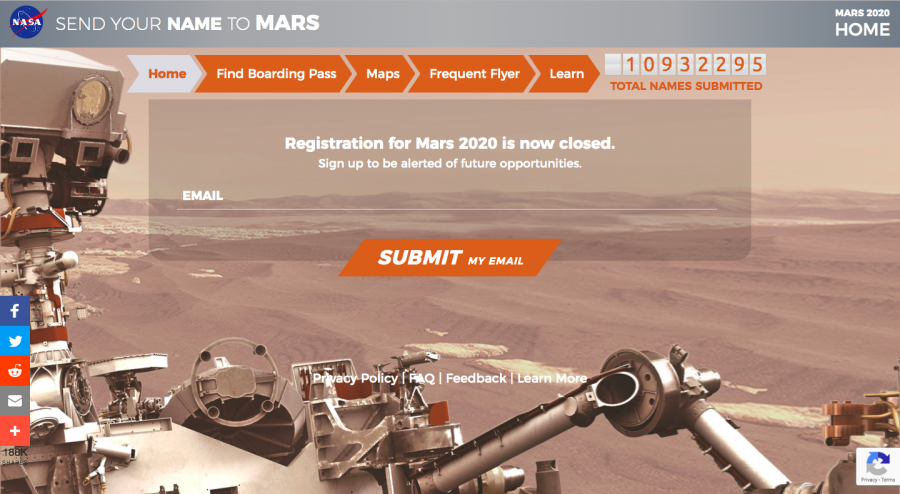 Shown is the registration site for the opportunity to have one's name inscribed on a rover. However, signups are closed as of Sept. 30. Photo obtained via NASA.gov

Thanks to NASA (National Aeronautics and Space Administration), students graduating from McLean in this year will have their names inscribed on an android going to Mars. The names will be followed by the words “McLean Class of 2020.”

One may be familiar with other infamous Mars rovers like Opportunity and Curiosity. The one launching in 2020 has actually not yet been given a name, because NASA has opened the choice up to K-12 students in the United States. Starting on August 27, students could submit an essay to apply for a name they wanted.

Similarly, NASA allowed the public to purchase souvenir “boarding passes” to Mars that would stencil the person’s name onto the rover going to Mars in 2020. For a period spanning from May 21 to Sept. 30, this opportunity was placed on a website. Unique to 2020 McLean graduates was the chance to place their names on a revolutionary probe.

“Nobody that I know of has done something like that, ever,” senior Akshitha Kalavakonda said.

As of Oct. 8, the rover bore its own weight for the first time its designated 6 wheels. It is set to depart Earth as early as July 2020. According to an article published by the NASA, the Mars initiative “aims to help future astronauts brave that inhospitable landscape.” Not only do students have the experience of their name being on a distant planet – they are now part of a larger process that will impact the way that humanity exists and push the bounds of curiosity.

“I wonder what [Mars] actually looks like in person. Is it similar to Earth? What would life be like on Mars?” Kalavakonda said.