The biggest event of the year for the club is McMUNC, hosted at McLean 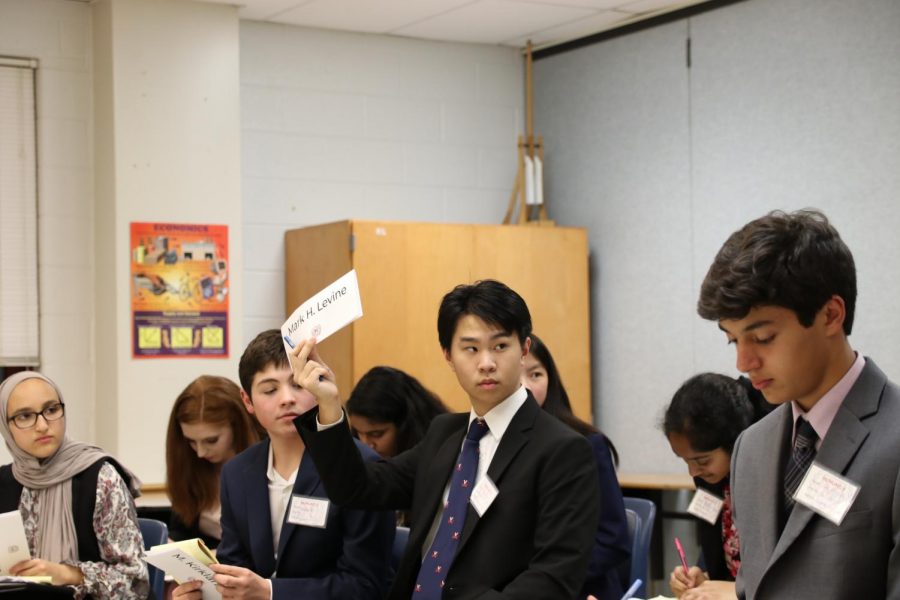 DEBATING DELEGATES - A delegate opts to speak in a conference room during McMUNC on Saturday, Oct. 26. Public speaking and debating is a crucial skill to have in MUN.

The MUN club of McLean prepares for a year of conferences and travel, through hard work and meetings. The main event taking place this year is the McMUNC, which was hosted at MHS on Oct. 25-26.

MUN is a club for students who are passionate about world affairs. During a conference, teams act as delegates for countries around the world, deciding on policies for global situations and topics, which are selected before a conference.

This year marked the fifth annual McMUNC, where other local schools competed against each other. It takes a lot of preparation because it is important that everything runs smoothly.

“We stayed organized pretty much throughout the conference and think that even when the conference size doubled from last year to this year, it still worked very well,” said sophomore Leah Siegel, co-Director of Crisis for McMUNC and Director of Logistics.

Thousands of dollars are raised before and during the conference. That money is then used for conferences that the McLean team will participate in and subsidizing delegate fees.

“McMUNC is extremely important as it’s pretty much the only revenue we get [throughout the year.]” Siegel said.

MUN consists of a team, core officers and a Secretariat who travel to other schools across the nation to participate in student-led MUN conferences.

“MUN is definitely more student-led; the people who do it are generally very interested in the club,” Howery said.

The secretariat at MUN has seven positions and additional core officer positions, who help the Secretariat lead the club. The Secretariat board holds nine members at a time, mostly juniors and seniors, who are chosen by former Secretariat seniors.

“Every year there seems to be one sophomore on the Secretariat; it’s nice to have underclassmen lead things,” Howery said.

When it comes to conferences besides McMUNC, a typical local conference for the MUN team lasts from Friday night until Saturday evening. They include lunch and closing ceremonies, which is when awards for the conference are handed out to delegates. Although these conferences are local, they can be a big commitment for members who have other activities going on.

“At McLean, MUN is really what you make out of it. Some people do one conference per year because they have other commitments,” Howery said.

Preparation for a conference generally takes three to four hours. Being on the Secretariat and having a leadership position makes preparation more time consuming, especially when it comes to travel conferences.

“The planning that goes into it is very extensive; [it includes] hotel booking, transportation, meetings and officer communication. At the peak of the MUN season, of just planning itself there can be up to 10 hours a week,” Howery said.

Travel conferences take more time to prepare for because they are more demanding. They usually take up around three to four days, often causing members of the MUN team to miss school. Although Howery has been lucky enough to attend travel conferences, not every member of MUN participates in them and travels.

“My first conference was actually at [UVA. I] didn’t have any prior experience so it was kind of scary at first, but I’m glad that I had that exposure my freshman year,” Howery said.

When signing up for a conference, members list their top three country choices on a spreadsheet and sign up on other forms made by core officers. They also have to pay for registration via MySchoolBucks, generally around $20-25. There are two novice teams and then more intermediates that participate in every conference, nine total throughout the school year.

“[Being on a novice team is] a really great way to learn how MUN works, because you can ask your questions in real time,” Howery said.

In addition to conferences, members are encouraged to attend weekly meetings. Meetings are not as stressful as conferences, and members of the club use the time to prepare for upcoming conferences and McMUNC. Meetings are around 35-45 minutes long, but can stretch up to an hour if a conference is approaching.

“We got feedback from some novices so we are changing our training and meetings, which will be more like practice,” Howery said.

Although it can take up a lot of time and effort, MUN helps students with communication skills, and Howery said it is a great way to bond with other students and team members.

“It fosters a good sense of team and family,” Howery said. “The little things like that make it much more enjoyable.”