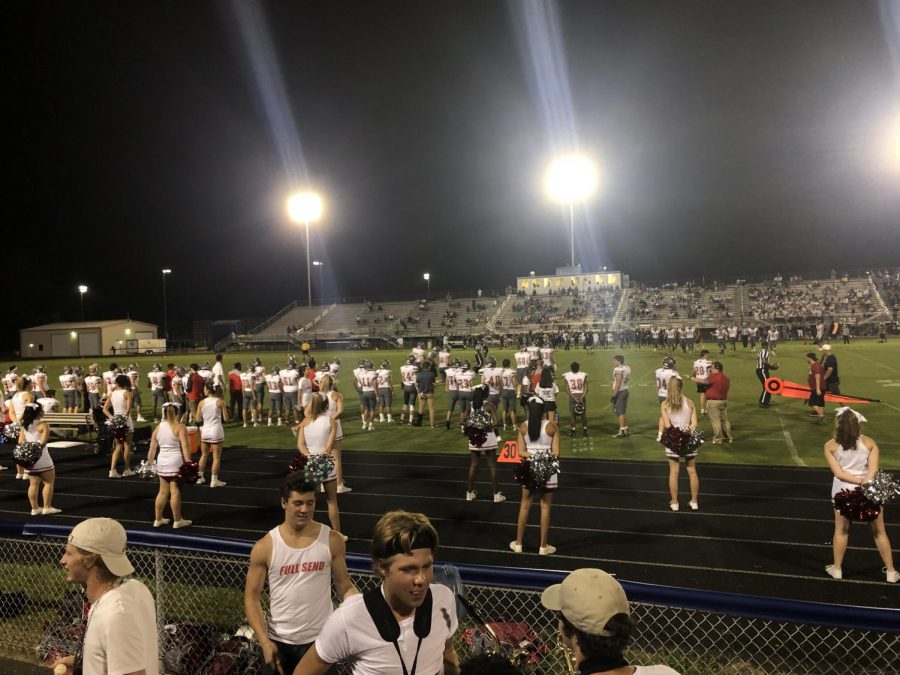 Varsity football players and cheerleaders watch from the sidelines at the first game of the season against Osbourne Park HS. This was the team's first victory since 2016.

After surviving a two-year dry spell, Boys Varsity football won 12-6 against Osbourne Park High School on Thursday. This was their first game of the season, and their first victory since 2016.

This is a historic moment for the Highlanders.

“You could see everyone just perk up watching the clock hit zero,” senior lineman Owen Ossman said. “It was a pretty exciting moment. On the bus, it was just wild. Everyone was ecstatic and wanted to go celebrate in the locker room back home.”

“I was really excited because it was the first game of the season and I know players on the team were too because it was finally a chance for them to show how much they’ve improved since last year,” Dimatulac said. “I thought we had a good chance of winning because our players have been practicing really hard.”

The boys won the two scrimmages they played before the season started, which gave the team more confidence this year, since they have lost their scrimmages in the past.

“As soon as we got to Osbourne Park, we were ready to do business,” Ossman said. “Once the whistle blew to start the first quarter, everyone was just in attack mode. Many people thought we had a good chance at this one.”

“A wave of emotion” hit the team members during the game as it became more clear the team would seize victory, Ossman said.

This excitement did not end at the sidelines. The varsity cheer team, pep band and spectators grew louder throughout the game.

“From the beginning of the game, there was so much energy on the field and it carried the team throughout the end,” Dimatulac said. “Listening to all the players, fans and cheerleaders rally up the team while they were on the field was a really awesome thing to watch. A lot of support was given to the team, which made a huge difference to the outcome of the game.”

The hours of practice and planning certainly have paid off, but players believe other factors contribute to their recent success, as well.

“This season, there’s more of an identity on the team,” Ossman said. “Everyone is here for the guy next to them. It allowed us to gel as a team better and really put it together Thursday night against Osbourne Park.”

For the last two years, the team accumulated an 0-20 losing record. In 2016, the team went 1-9, winning only the Homecoming game. For the past few years, Highlanders had little faith in their team.

“I thought that they would lose,” junior Saankya Gundlapalli said. “I basically lost faith in McLean football.”

After this seemingly sudden change in the team’s record, though, Gundlapalli was “surprised” and will “probably be going to more games” this year.

The team will keep up the hard work and “have more games like Osbourne Park,” Dimatulac said. She has hope for more wins.

On Friday, September 6, come out to support your Highlanders at the first home game against Marshall HS. The team’s hard work and genuine spirit will make this season one for the books.

“The plan is to just keep fighting,” Ossman said. “We can win any game on our schedule, and I think a lot of other people in the locker room as well as on the coaching staff believe that, too.”