Boys varsity soccer goes above and beyond 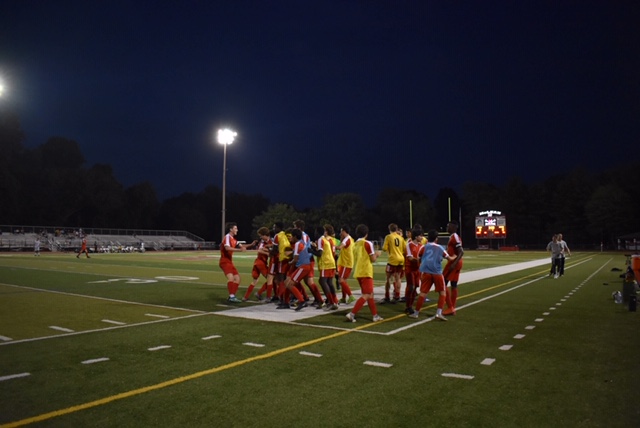 The Boys Varsity Soccer team celebrates on the field after Kyle Goldstein scores the winning goal.

This last Thursday, the boys varsity soccer team played Osbourn High School in the Regional Quarterfinal. The team has been working hard all season to advance through the tournament, and their hard work is really paying off in the last few games of the season.

Before the game, the team prepared themselves for the fight ahead. They knew it would be important to be both physically and mentally ready.

“Going into the game we knew that Osbourn was a decent team,” junior Drew Cole said. “We knew it was going to be tight, but we always fancied ourselves to win.”

Although they went into the game with confidence, Osbourn clearly did, too. The game was tied 0-0 at half time, and our team knew it was time to put their head in the game. No one scored for the remainder of the game, and ten minutes of overtime were played after the game ended in which senior Kyle Goldstein scored the first and winning goal.

After the goal was scored, the crowd erupted and the team on the bench were met by those on the field for a celebration before the field was taken again.

“The energy was absolutely amazing,” Cole said. “While it did get stressful going into overtime it wasn’t anything we couldn’t handle and we honestly fed on that stress and turned it into positive energy.”

Throughout the game, the crowd was cheering nonstop for the team. The boys give some credit to the crowd for spurring the team on to work harder and play better.

“Having all of those fans in the stands helped so much,” Cole said. “Hearing all of the cheering really got us going and motivated us to win.”

This win is beyond exciting for the varsity players. Although they were confident, doubts did arise at some points during the season, and this win just raises the team’s hunger for more success.

“After the game we were ecstatic,” Cole said. “I don’t think many if at all of us expected to come this far in the season, and doing so and winning was an absolutely amazing feeling.”

Players have seen the team change and grow during the season as well. After a rocky start, they have bonded as a whole, and their combined devotion to the sport has led to huge success in the postseason.

“Our team has improved so much over the season. We started off not so great, losing about 4 or 5 games in a row,” Cole said. “But, we then turned our season around from that point on and have now made it to a regional semifinal. This just shows how much resolve we all have and how much we have all improved together this season.”

The fact that twelve senior players are leaving this year makes the win even more meaningful for the team. The team has come together through the worst and best parts of the season, and advancing so far has created many memories and a hope for the future within each player.

“I feel very confident in our team moving forward. We have some great underclassman talent, with our only first team All-District player being a sophomore,” Cole said. “I feel that going into next year all of us rising seniors will lead our team, hopefully to the place we are now and maybe even further.”