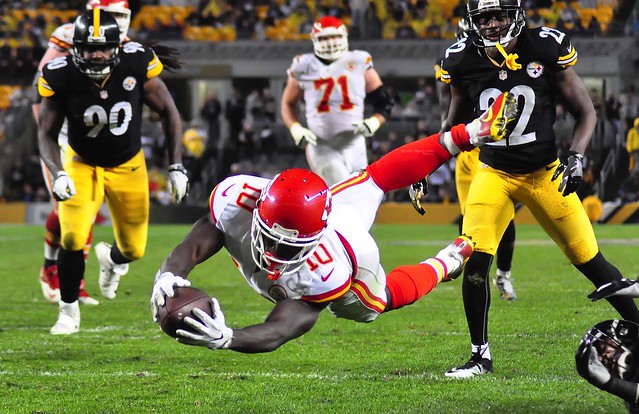 Tyreek Hill dives toward the goal line in a game against the Pittsburgh Steelers.

Pro bowl wide receiver Tyreek Hill of the Kansas City Chiefs is one of the leagues brightest young stars. Known for his blazing speed, the wide out is a constant threat on the field. However the talented player’s career has been put in jeopardy as he is under investigation by police for an alleged battery incident.

Police were called to Hill’s home twice in March; both to investigate reports of abuse against a juvenile. It was first reported by the Kansas City Star that the incident occurred towards Hill’s son; who was left with a broken arm. Though Hill and his lawyers continue to deny the allegations, all evidence seems to point to Hill’s guilt, who even temporarily lost custody of his son.

Hill’s career is on the line in yet another battery investigation of an NFL player, but the case has a deeper meaning for the league. The enforcement of the NFL’s personal-conduct policy has been one of the league’s most inconsistent features in recent years, and has endured harsh criticism in the handling of the many domestic violence and battery charges faced by players. The development of yet another battery investigation gives the league the chance to restore the validity of their policy and disciplinary actions.

This will require the NFL to avoid repeating previous mistakes. A major issue with their handling of previous cases such as the Ray Rice and Adrian Peterson investigations was the league’s failure to perform their own in-depth investigations, leaving them completely reliant on slow legal procedures and TMZ revealed video and audio footage. The NFL also seems reliant on team owners and organizations to take charge of the situations with players.

This backfired in the Ray Rice case years ago when the Baltimore Ravens failed to act on the incident quickly, forcing the NFL to take delayed action. Only after the league suspended Rice was he released by the Ravens. Earlier this year, a domestic violence incident emerged regarding Kansas City running back Kareem Hunt. The team released him almost immediately, allowing the league more time to make an informed decision about his future.

This causes major inconsistencies in the disciplinary actions towards accused offenders of the personal-conduct policy. The criticism of the league that stems from their poor enforcement of the policy hurts their public image and reputation. Good public relations are crucial for an entertainment business such as the NFL to succeed, so it’s no surprise that in recent years the league has made revising the personal-conduct a priority.

Unfortunately recent revisions to the policy haven’t been nearly as successful as hoped, so history has seemingly repeated itself in recent cases. The NFL seem to be making similar mistakes again, as they are waiting for the Kansas City Chiefs and legal authorities to take action on Hill before reaching conclusions of their own.

Instead, the league must take charge of their own investigation of Hill’s case to reach their own conclusion and aid legal proceedings. Taking proper action into the Tyreek Hill investigation is crucial to the league’s ability to justify future enforcement of the personal-conduct policy. Otherwise, the NFL will fall back into their ongoing cycle of mishandled allegations and investigations.