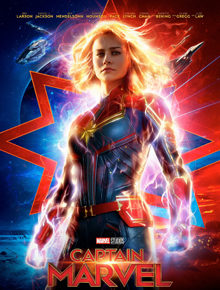 Captain Marvel promotes an inspiring message to young women while at the same providing a fun, action packed experience.

One of the aspects that I appreciated about this movie is that they make it very clear what time period the movie took place in. In one of the more memorable scenes, there is a very tense moment when some of the hero’s most burning questions is about to be answered.

But, she has to wait for an audio file to load on an older desktop computer. These kind of moments happen throughout the film, which helps provide some comic relief.

Another aspect of the film that I like was the acting of Samuel Jackson, who played Nick Fury. I especially found his relationship with the cat very amusing. It was also nice to see another aspect of Nick Fury that hasn’t been shown before in the Marvel cinematic universe.

Also, I really liked the alien designs in the movie, especially those of the Skrull. For those who don’t know, the Skrull are shape shifting aliens who were often portrayed as villains in the Marvel comics. The way that they introduced the concept of a space war between the Skrull and Kree was well done and didn’t leave me questioning why there was a war between them to begin with.

Another part that I liked about the Skrulls was how they used their shape shifting abilities to put themselves in high positions of authority. In the comics, they have done that multiple times, so I appreciate how they are staying true to how the Skrull operate.

One aspect of the Skrulls in this movie that I did not like was when they show them shape shift. The first time that it happened, I was grossed out when they showed their flesh mold and how their faces become momentarily complete smooth. I thought that when they did show them morph into different beings, that it would be more seamless. Thankfully, they only show them transform a few times.

Another part of the movie that I didn’t like was that there didn’t seem to be much character growth in the main character, compared to other Marvel movies. In Iron Man and Doctor Strange, it was obvious that the main characters changed for the better and became a better version of themselves by the end of the film. While she does become more powerful, physically, it didn’t feel like she grew much as a person. By the end of the film, she was still the brash, strong headed warrior that is first shown at the beginning.

Overall, Captain Marvel didn’t offer any groundbreaking moments, but it did provide action filled scenes interspersed with comedic bits that were genuinely funny.