Glenn Kessler speaks with students about being a modern-day journalist 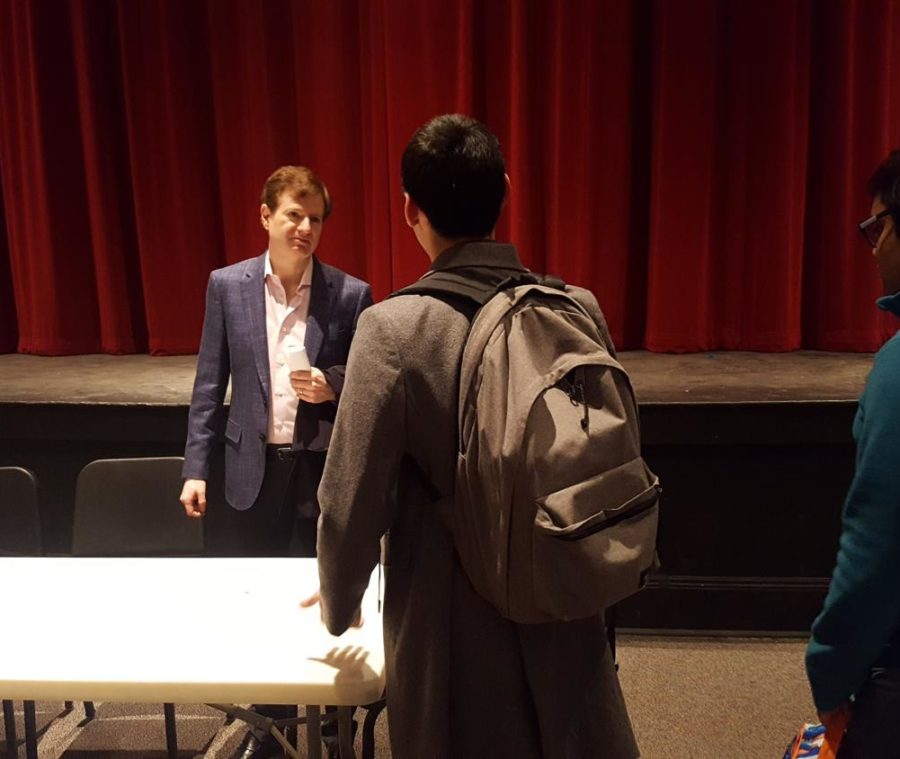 Glenn Kessler speaks to students following his talk on Feb. 15. AP Government students were required to attend, but the event was open to all interested.

On Feb. 15, editor and chief writer of The Washington Post’s Fact Checker column Glenn Kessler made a guest appearance in the McLean auditorium. He spoke with students about his job as a professional journalist, answering students’ questions about the field and what his specific job entails.

Kessler attended Brown University as an undergraduate student, receiving a bachelor’s in history. Thereafter, he graduated from Columbia University, receiving his master’s degree in International Affairs. Now, Kessler works for The Washington Post and has been a part of the Fact Checker column for 9 years, for which he analyzes the credibility of statements issued by politicians. The Fact Checker uses a system of Disney-inspired “Pinocchios” to rank the statements on validity, with one Pinocchio being slightly misleading and four Pinocchios being “whoppers,” according to the Post’s website.

AP Government students had the opportunity to ask questions during the talk, and The Highlander sat down with Kessler following the talk to ask a few questions as well.

AP GOV STUDENT Q: Has there been an increase in false claims in the past five years?

GK: [False claims] are not really new. What’s new is that falsehoods can spread more quickly because of social media. And we’ve certainly encountered that—something can go viral before we even have a chance to fact-check it. The current president is an outlier in terms of the falsehoods he says compared to the previous presidents I’ve covered, and I’ve covered every president going back to Ronald Reagan. So we’ve given lots and lots of Pinocchios to President Trump. And in fact, we even have a database in order to keep up—[because] we couldn’t fact check everything he says—where we’ve cataloged every false and misleading statement that was made since he became president, and now stands at around 8,500 statements. But President Trump is just really unique, he’s very different than most Republicans, most Democrats. In general, most politicians try to stick relatively closely to the truth and they exaggerate it. So it’s really rare to have politicians like President Trump, where about 65% of the things he says are four Pinocchios.

AP GOV STUDENT Q: What would you say to critics who claim The Fact Checker is politically biased?

GK: Many people say that my political beliefs color my work, and that’s simply not true. Because as a journalist and professional, it’s like a doctor or a lawyer. A doctor doesn’t care if you’re a Republican or a Democrat when they’re operating on your heart or your leg. As a journalist, I just try to find out the ground truth. What are the facts? I always say to people, you could read The Fact Checker for a whole month, day after day, and you could not figure out what my personal political beliefs are. One day we skewer Democrats, other days we skewer Republicans, and it doesn’t really matter who’s saying it and what they’re saying, the issue is whether or not what they’re saying is factual.

AP GOV STUDENT Q: What’s the worst part of the job?GK: I love my job! It’s the best job in journalism. I can say this, I was quoted in the New York Times for saying this, I write what I want and I piss people off. You know, the hours have gotten very long. Particularly because of this Trump database, to keep up. My weekends and nights are often spent still working. And the metabolism of journalism has changed since I first started. When I first started, you wrote one article a day generally, and you wrote it and that was it—it was published the next morning. But now you have to write something as soon as it happens, get it on the Web, make another version, then make another version, if something happens late at night, and then you have to also be on social media. So it’s a constant, 24/7 job these days. We live in a 21st century world.

The Highlander: You talked about false and misleading statements, could you explain how you differentiate between those and a lie?

GK: I try not to use the word lie. I can’t get into someone’s head—for instance, the president, he says lots of 4 Pinocchio statements. But do I really know whether or not he knows what he’s saying is false? And in particular President Trump is very situational, so if he says something today, it might be completely different from something he says tomorrow or what he said the day before, but he might in the moment actually believe what he’s saying. So we’ve only used the word lie once at The Fact Checker. That was last year, you can look it up. It was about President Trump and I was able to document it clearly that he knew his statements about the payments to the women that alleged affairs with him were false because he said he didn’t know anything about it. But then a recording emerged where he was talking to someone about it. So it was enough of an egregious situation that I could say the word lie, but generally I don’t use the word lie. It’s up to readers to decide whether or not it’s a lie.

The Highlander: Have Trump or other politicians ever called out The Fact Checker directly or alluded to it?

GK: Trump, I think on ten occasions, has talked about how he hates getting Pinocchios. They seem to really drive him nuts and he talks a lot about it. When we’ve given Pinocchios to Democrats he has also brought it up and said, “The Washington Post gave four Pinocchio’s to…” So he’s well-aware of it. And I know I heard a story from the Obama campaign that during the 2012 election the President, in his debate prep, started to say something but one of the staff members said, “Mr. President, you can’t say that because you’ll get a Pinocchio,” and Obama was not happy.

The Highlander: Why do you think it’s so important for people to have The Fact Checker as a resource, especially in today’s age where politicians can say anything and people will believe it?

GK: You know, we don’t have The Fact Checker to change the behavior of politicians, we write it just to inform readers. Our readers can cast their votes or make the political decisions for whatever reason, but you want to be able to allow them to have all the facts at hand when they make those judgments. In December we did a poll, [and] we wanted to see whether or not President Trump’s falsehoods were resonating with the American people because he repeats them a lot, which is unusual. What we found is that even Trump supporters tended not to believe his most repeated claims and most Americans didn’t believe anything. We didn’t identify these statements as Trump’s, we just asked what is true or false. The interesting thing in that poll is we took a question from 2007 where another pollster had asked, “Is it important for president to tell the truth?” and in 2007, 70% [of both parties] all had the same answer: it’s important for the president to tell the truth. When we asked that question in November, the response from Democrats and Independents [was that] over 70% said yes, it’s important. For Republicans, it was 49% who said it was important, which suggests to me that they understand that the President is not really telling the truth, but they decided it doesn’t really matter that much to them. So it’s the same thing with the fact checks—you can take the information and decide whether that is worth it to you.