The Red Winter Guard team lines up behind the Gatekeeper. The Gatekeeper is clothed in purple robes and represents the key to eternity.

The audience at Mt. Vernon High School looked down as the McLean Winter Guard team entered, dressed in white and purple one piece outfits. Still more people turned in anticipation as various props were wheeled out; golden rods that were rolled onto the cloud-colored mat that they would soon preform on. When a figure dressed completely in a long purple robe walked out, seemingly unable to see, confusion continued to arise from the crowd. When a recording began, not of the usual music accompanying most performances, but a voice explaining the legend of the Gatekeeper, the elements of the performance fell into place. 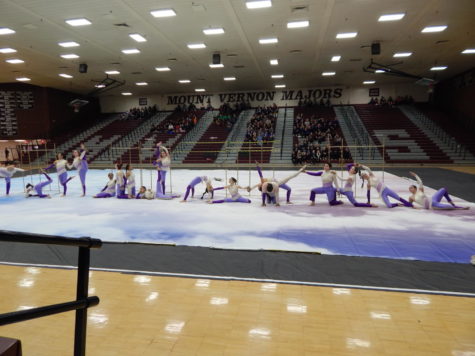 “The Gatekeeper” performance begins with the Guard team lined up in front of the gates. The introduction plays while they hold these positions. (Photo by Jessica Opsahl-Ong)

The recording began with, “Eternity: a fate of existence not bound by time or space. The thought of eternity is a comfort for most and gives us the hope that we will eventually be reunited with the ones we love most. But how do we reach eternity? What do we have to do to obtain it? Stories have been rumored that the fate of our eternity lies in the hands of one figure, one character, that has access to the entrance to eternity. What would you do if the only thing stopping you from forever was that one individual. And, so goes the story of the Gatekeeper.”

This theme of eternity was prevalent throughout the four minute performance, with people chasing after the purple robed figure and trying to the golden gates. 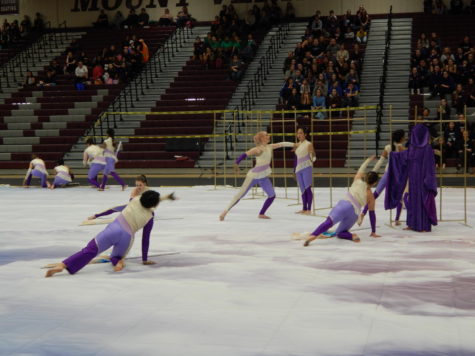 The performers desperately chase after the Gatekeeper. Their graceful and emotional motions made the routine feel more real. (Photo by Jessica Opsahl-Ong)

“First, we all start in front of heaven’s gate. Throughout the show, the gate is constantly moving away from us as we try to enter it. the character in the purple cloak is the gatekeeper, who is ultimately keeping us from entering heaven,” said Kara Tung, junior and Co-captain of the McLean Red Winter Guard Team.

The performance ends after the purple cloaks have been ripped off the Gatekeeper.

“At the end, we rip off the pieces of the cloak so that the Gatekeeper becomes one of us. And then at the very end of the show, we enter through the gate. The last image is of us reaching up, facing away from the gate,” Tung said. 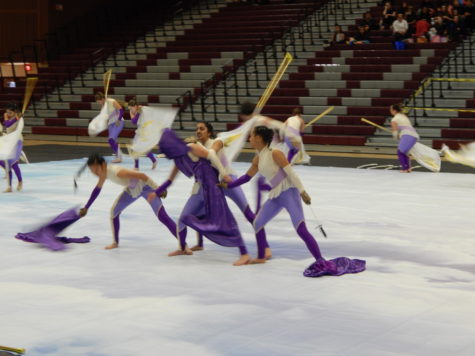 Three of the people trying to get through the gates of eternity rip off the Gatekeeper’s robes. This reveals one of their one. (Photo by Jessica Opsahl-Ong)

This concept was put together by the team’s coach, Kaitlyn Ries, who also did the choreography, music selection, uniforms, and more for the routine.

The team began practicing “The Gatekeeper” back in November, where first they started working on learning the techniques needed for the routine and then advanced to putting together the performance. They also have added more elements to it throughout the season, specifically ones by guest coaches.

“Our saber line, particularly, had learned new, difficult choreography from a guest coach only four days before we competed, and they performed it really well on Saturday,” said Priya Shah, junior and Co-captain of the McLean Red Winter Guard Team.

The hardest part of any choreography in Guard is being able to not only do it correctly on an individual level, but also in-time with the rest of the team. The finale of the performance was a spectacular display of this type of teamwork.

“The most difficult part of our show as a whole team was probably the ending flag choreography. Individually, we are all able to achieve that work; however, everyone on the team performs the ending flag choreography, and being able to keep our equipment and movement synchronized and uniform is difficult. We all have to constantly be aware of not only our own actions, but also the actions of everyone else so that we are able to perform the choreography as one unit,” Shah said.

The team ends with flying colors in their big finale. Here, everyone twirls a colorful flag to the delight of the audience. (Photo by Jessica Opsahl-Ong)

After the beautiful performance, the team ended up placing 5th out of 11 teams in their division. They scored the best in the “General Effect” category, where they were 4th best. General Effect is the category which scores how well the various aspects of the show tie together to convey the overall theme.

“This past weekend was our first time competing in costumes and we added more detailing to our show look,” Tung said.

They hope to continue improving on other elements of the routine for the upcoming Winter Guard International (WGI) competitions.

“We will continue to work on not letting our mistakes keep us from performing. It is really easy to let one error affect how you act for the rest of the show. You have to remember that the judges are not just watching how you handle the equipment, but also whether your expression matches the show’s theme and is confident. It’s okay to make mistakes as long as you can recover from them and keep going, which is something we need to work on for the rest of this season,” Shah said.