Spirit on the sidelines 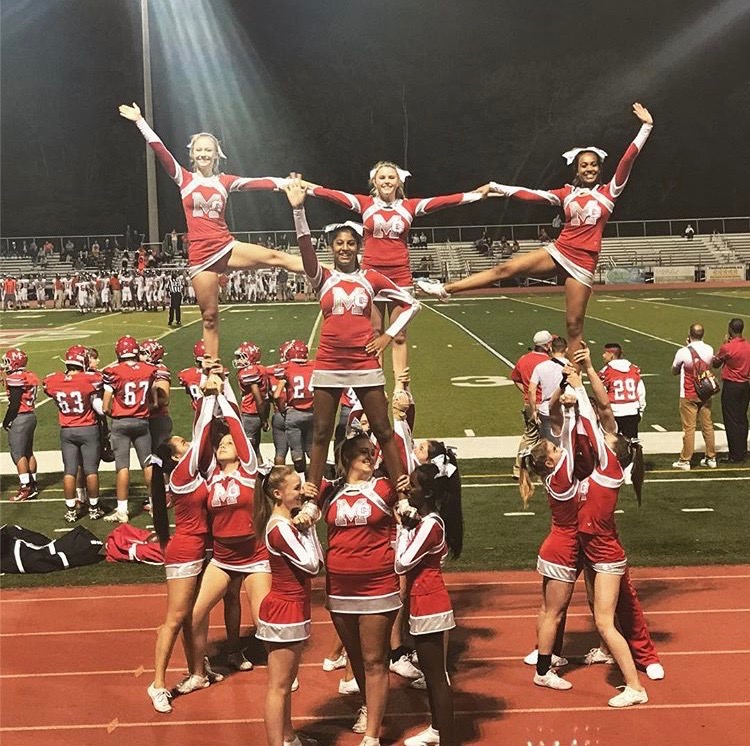 CHEER PYRAMID—Centered in the stunt, Malhotra cheers with her team at a Friday night game in the 2017 season. The cheer team performs stunts and cheers throughout every football game. (Photo courtesy of Anika Malhotra)

“Let’s get fired up!” McLean cheerleaders yell to the students at crowded football games most Friday nights. Sophomore Anika Malhotra stands among the sidelines, stunting, flying and tumbling with her team members.

Currently a sophomore, Malhotra has spent years dedicated to cheer. From starting cheer at Cheer Tyme, Malhotra has progressed her skills for the McLean sidelines and cheer competitions.

“I’ve been cheering since I was 9, and it’s something that’s become a part of me and I can’t imagine putting it behind,” Malhotra said.

Before the fall sports tryouts in freshman year, Malhotra decided to join the McLean cheer team. As a freshman, Malhotra faced competition of students who had been part of the team for years. However, Malhotra felt confident about her skills.

“I had a lot of experience because competitive cheer is different than high school cheer. I was one of few people to have experience in tumbling and to have a back handspring,” Malhotra said.

After a successful experience at tryouts, Malhotra joined the varsity cheer team as a freshman. Along with the other freshmen on the team, Malhotra brought new skills to the team. Sophomore Kayla Merritt was one of the freshmen to join the team with Malhotra.

“Anika has been an important factor to our team, and I think that as a team, we have improved so much due to her,” Merritt said.

Throughout the season, the cheerleaders work hard to prepare a routine for their competitions as well as cheering on the sidelines at football games.

“Competitions are very quick paced and competitive…it’s very tense and some girls get injured. People are very stressed and panicked before we go out,” Malhotra said. “Sometimes we get a little discouraged because we are known to lose by other cheer teams. I like to think that we all try our hardest anyways.” Malhotra enjoys cheering at football games and being able to spend time with her teammates. The spirit of the crowd creates an amusing atmosphere that helps the cheerleaders to enjoy the games.

“We have much more spirit cheering at football games, rather than cheering for ourself [at competitions]. It’s easier to support other people than it is to support yourself,” Malhotra said.

Ann Malhotra, Malhotra’s mom, has supported her by signing her up for cheer teams, along with camps and clinics.

“It’s really important for Anika to be able to get a lot of experience in cheer, so that she can improve her skills and continue her passion,” Malhotra’s mom said.Malhotra, along with the other varsity cheerleaders, have plans to improve the cheer program. With a new coach next year, they hope to create opportunities to practice off-season.

“I would change the amount of work that goes into putting the program together because at other schools, the cheer teams have clinics and green days, so usually at [McLean] tryouts, people lose their skills and we start back at the beginning,” Malhotra said. “We are trying to put together green days and clinics and trying to get funding for camps.”

Malhotra has not made any long-term plans to cheer in college, but she will practice on her own time to maintain her skills. Cheer has been a large part of her life, so she does not want to give it up so quickly.

Malhotra enjoys being a part of the cheer team and being with her team. She loves bringing energy to the football games and leading cheers.

“I do wish that I was in the stands with my friends, but at the same time I do enjoy being on the track with my team supporting the football players,” Malhotra said.