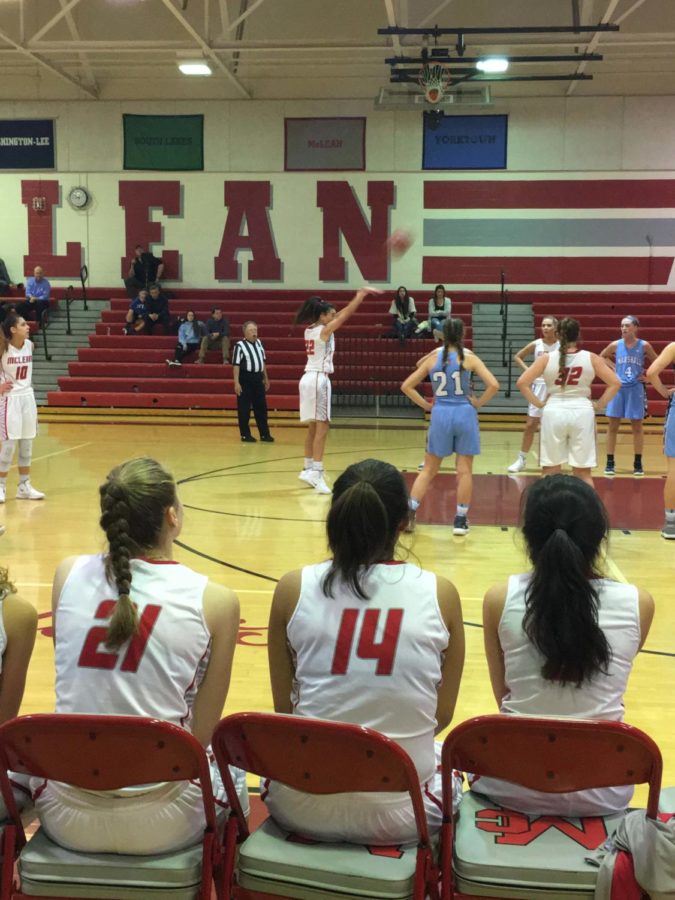 SHOOTING TWO — Mia Fitzgerald shoots a free throw in the home game against Marshall on Dec 4. The Highlanders won the game 73-67. (Photo by Emily Friedman)

Number 22 wipes her sweaty brow as she dribbles down the court. The sound of the ball hitting the ground echoes through the whole gym. She passes the defender and drives to the basket for a perfect right-handed layup. The crowd goes wild.

Freshman Mia Fitzgerald started playing basketball in fourth grade and has been playing competitively ever since. Both of her older brothers played many different sports for McLean, including basketball, which encouraged Fitzgerald to start playing.

“It’s hard being the youngest on the team because everyone is older than you and they have more experience, but my teammates are always nice to me and try to help me improve at every practice,” Fitzgerald said.

As a freshman on varsity, it is often tough to compete with the other players who are much older, and often more experienced, but the team has embraced her. She already fits in well with the older girls.

“The hardest part of basketball is the nerves. Because I’m a freshman, my coaches expect a lot from me, and it’s often very nerve racking” Fitzgerald said.Despite being the youngest on the team, Fitzgerald is a starter and one of the highest scorers. She is also a phenomenal defender. Being a freshman encourages Fitzgerald to always put in 100 percent effort.

“I’ve seen Mia play now for the last three or four years, and she has so much potential. Her height is so helpful. She has a good head for the game. She takes care of the basketball which sometimes for freshmen is hard to do,” varsity girls basketball coach Jen Sobota said.

In addition to being an exceptional basketball player, Fitzgerald also plays volleyball and soccer. She was on the undefeated freshman volleyball team this fall, but basketball remains her first love.

“It’s very exciting to watch Mia play on varsity. It’s a lot of pressure for her, but she’s very honored to be on the team. She’s never had this experience before, but she is now getting in to the routine,” Mia’s mom Michelle Fitzgerald said.

Fitzgerald is rarely taken off the court. She is a very versatile player, as she plays almost every position. She is 5’’ 10’, but also has good ball handling skills.“Mia when you first meet her comes off as quiet, and you’re kind of afraid to yell at her for doing something wrong because of the way that she looks, but I have come to find out she’s one of the biggest goofballs and super coachable. She’s such a great kid,” Sobota said.

Fitzgerald was a crucial part of McLean’s 73-67 win against Marshall on Dec 4. She loves the high energy of the sport, and she isn’t planning on quitting anytime soon.

“Mia absolutely has a future in basketball. She puts in the work,” Sabota said. “She has the base skills that she needs, and she will continue to improve every year.”