Highlanders pull ahead late in blowout win vs. Saxons 69-49. 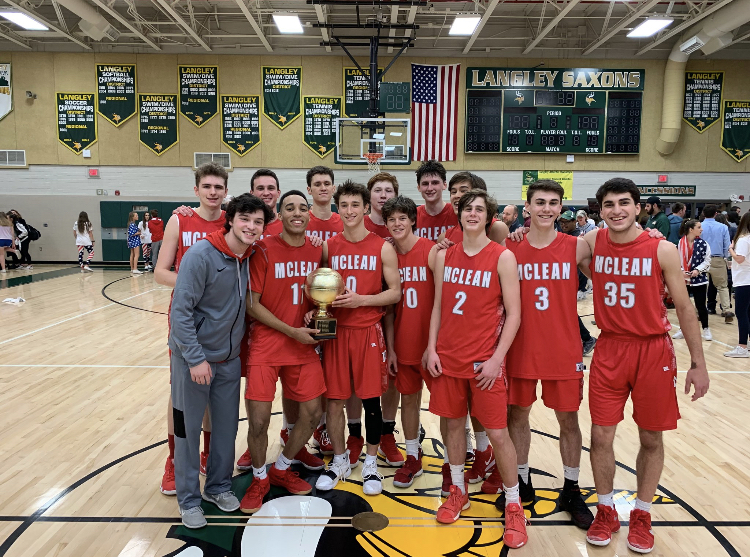 On Jan. 25, you could not be blamed for thinking that a movie was being filmed at Langley High School. In fact, the storyline going into the game couldn’t have been written any better.

The McLean Highlanders, once the laughing stock of Northern Virginia basketball, now district juggernauts taking on the Langley Saxons, a team just three years removed from being conference champions and making a run at the state title. One town, two high schools. An absolutely bitter rivalry between students that has spilled out into vandalism and fist fights in the past. The signs, the chants, the red and green towels, the absolutely packed gym:

There is truly no rivalry like that of McLean and Langley.

The Highlanders entered the game with an undefeated 5-0 record in the district, and although the Saxons remained winless in district play before the game, rivalry games like the Rotary Cup are known for being close, regardless of records or previous matchups. It was just a year ago that McLean came back from a 26 point deficit to beat the Saxons for the first time in six years in what many argue is one of the greatest games in program history.

The Highlanders won the first matchup of the year against the Saxons 67-58 on Jan. 11, in a very contested game. For them to pull off the season sweep, senior guard Matias Prock would need to step up, break through the strong Saxon defense, and lead McLean to the win.

He did so much more than just that.

With 6:38 left in the second quarter, Prock (17 points) etched his name into school history, scoring his 1000th career point as a member of the varsity team. The McLean faithful erupted into a hysteria. Following the score, head coach Mike O’Brien called a timeout as the voice of the Highlanders, Rusty Payne, took the microphone and announced the historic moment to the capacity crowd. Saxon and Highlander fans alike gave Prock a standing ovation.

“It was crazy feeling, only made better by the fact that I could do it during the Langley game and then also get the win,” Prock said. “I had no clue how many points I had at the time so when I went up for the layup and the student section went crazy and they announced it to the entire gym it was a really special moment for me.”

The Saxons, who primilary run a dribble-drive motion offense, where ball-handlers drive to the basket and go for two or kickout to shooters at the three-point line, were unable to land the shots they did in the first matchup vs the Highlanders. The Saxons went 7 for 23 from beyond the arch, a 3P% of .30  which is significantly lower than their season average. Even with that, the game was never out of reach for the Saxons. Unlike last year, Langley has no bonafide scorer or stars, so they rely on the entire team to contribute. Senior guard Nicholas Gasparis had six points, as did junior guard and former Highlander Thomas Balistrere, and senior forward Jack Heuymans scored 10 points. One of the Saxons best players, senior forward Duncan Brown, did not play due to a back injury, which significantly hurt Langley’s play around the basket.

Saxons head coach Scott Newman is known for his full court press defense that gave the Highlanders some trouble to start the game. Bad turnovers and questionable calls gave the Langley sideline life as the Saxons looked to steal every pass the Highlanders attempted. To there credit, It worked well; junior guard Addison Wallace (0 points) had two steals, and sophomore guard Cole Withers (5 points) had three, and the Saxons were able to tie the game on three seperate occasions before halftime. While McLean was able to ward off any major damage, this game, as so many McLean/Langley games do, looked like it might come down to the final moments.

The Highlanders were also without starting forward Brian Aka (4 points) for a large portion of the game. Aka got into foul trouble early, and with two in the first quarter, McLean would need their other big men to step up in his absence. Luckily for them, senior forward Drew Marteen had the game of his career. His 12 points in the paint were a key part of the Highlander victory as with every Langley offensive run, McLean found a way to get it to their big man down low. Marteen went 6/7 from the field, and the big time drives from senior guard Tucker Legget (8 points) and silky smooth jumpers from senior foward Evan Stout (8 points) further alleviated the Highlanders worries and kept the Saxons at bay.

McLean also benefitted from strong play off the bench. Sophomore forward Nate Legg was a sparkplug for the Highlander offense, scoring 10 of his 12 points in the second half and cementing himself as a starter on the team in years to come. Junior guard Evan Bremser (2 points) showed his worth making several clutch defensive stops throughout the game in relief of Prock and Leggett.

It wasn’t until the fourth quarter, with all the momentum on their side, that the Highlanders started pouring it on. The Saxons had slowly but surely made their way back into striking difference, down only six at the start of the final period, but bad shots and a raucous Highlander crowd made the Langley gym feel like McLean High School North. The Highlanders scored 25 points in the fourth quarter, compared to the Saxons’ meager 11 points, eight of which came from junior guard Tre Vasiliadis (10 points).

“It was like the best present I ever could ever receive,” Aka said. “To be able to beat them in our last rivalry game ever, was the greatest feeling in the world. It made it feel like all the hard work we put in had paid off.”

The Highlander student section stormed the court and celebrated the sweep over the rival Saxons with the team. This is the first time since the 2012-2013 season that McLean has beaten Langley at least twice in a season, (The 2012-2013 Highlanders team also defeated the Saxons in the district playoff going 3-0 against Langley on the year).

The first place McLean Highlanders now have a legitimate shot to go undefeated in the district for the year. Their next game is against the 4-13 Herndon Hornets on Jan. 29. The Saxons, on the complete opposite end of the spectrum, will look for their first district win of the season, also against the Hornets, on Jan. 28.

The Rotary Cup trophy will stay in the possession of McLean High School for the second year in a row. But with strong underclassmen play tonight, the Highlanders may be holding onto that hardware for the foreseeable future.